With national offices in Bucharest, NGOs Bankwatch and Greenpeace have long been active in Romania’s coalfields. Today both NGO’s are working closely with local governments in Gorj County – the nation’s lignite center – to help guide its transition into a renewable energy powerhouse. In this edition of the Romanian Power Move, lead blogger and podcaster, Michael Buchsbaum reviews how NGOs are assisting leaders on the ground to access Brussels-based support to fuel a green tech transformation within the nation’s most polluting region. 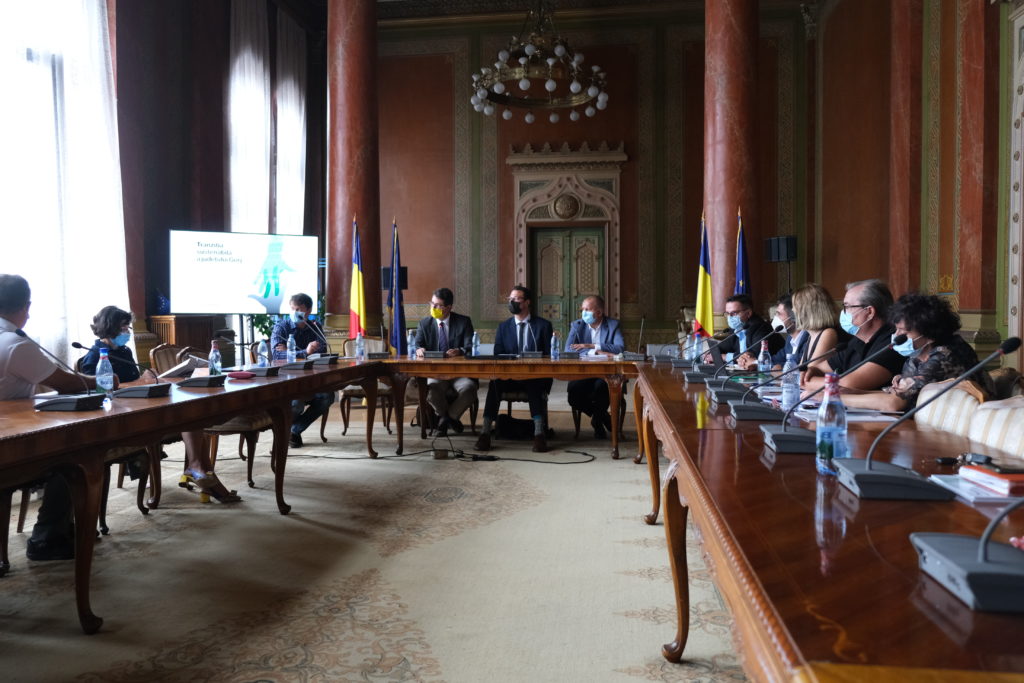 In a remarkable about-face Gorj’s County council is working with NGOs like Greenpeace and Bankwatch, as well as renewable energy thinktanks like EPG to explore pathways to transforming Gorj from the nation’s most emissions heavy county’s to one its cleanest. (Photo by Michael Buchsbaum ©)

After the launch of the European Commission’s Coal Regions in Transition (CRiT) Platform in 2017 designed to provide economic support to communities directly impacted by coal’s demise, NGOs stepped up.

“We went and talked with all the Jiu Valley mayors and presented to them the opportunities they had if they pursued this process,” explained Laura Nazare, Bankwatch CEE’s National Coordinator of Romania’s energy transformation in an interview with EnergyTransition.org. “In that sense, we were there from the beginning.”

Shortly afterwards, Bankwatch and Greenpeace helped organize in person meetings between several local mayors and EC officials in Brussels. They followed this up in April 2019 with a similar, albeit reversed, event in the Jiu Valley to better cement the nascent dialog.

While in Jiu, visiting EC policymakers participated in roundtable discussions with local authorities, regional NGOs, trade unions, businesses and representatives of the Ministries for European Funds and Energy.

Field trips were arranged to the former Petrila mine complex, Romania’s oldest and deepest. After shutdown in 2015, the mine became famous from efforts by artist and activist Ion Barbu to prevent its remaining concrete structures from razing.

As depicted in the award winning Planeta Petrila film, using humor and absurdism he was able to at least temporarily protect the site.

The NGO Planeta Petrila continues efforts to transform remaining mine buildings into a museum, cultural center and festival concert destination.

But industrial tourism only constitutes a small part of Jiu’s recovery. The region’s exquisite natural beauty will play a much larger role in its future.

But regional tourism initiatives are stalled – like many recovery efforts – during COVID – further demonstrating the exigency of miner retraining (as discussed here) and creating other lines of economic resilience.

From the other side of the Carpathians, still-lignite dependent Gorj County sees its neighbor’s industrial collapse as a “non-example” to avoid as Romania phases coal out over the next decade.

Gorj’s economy largely revolves around the state-owned Complexul Energetic Oltenia SA (CEO). Its surface mines and adjacent power plants directly employ over 12,000 miners and thousands of other contractors and service workers. Any sudden shutdowns will send shockwaves through the region.

Facing an existential crisis, county leaders are working closely with Greenpeace and Bankwatch to help forge new post-coal policies ensuring a pathway towards a “Just Transition.”

Though much of Romania’s government is centralized in Bucharest, its counties have comparatively broad regional decision-making powers. With so much EU funding available, local leaders are actively engaging.

“Given what we want to achieve here, Gorj County is set to become one of the biggest battlefields of Europe’s energy transition,” said Alan Sipanu in an interview with EnergyTransition.

Sitting on a special County Council team responsible for securing and ensuring the implementation of future EC Just Transition funds, he is tasked with keeping “our legacy as Romania’s leading energy generation region,” by drafting policies that take us “from first in coal today to first in solar and wind energy production.”

Central to the county’s emerging plan is taking advantage of the region’s otherwise grim legacy from decades of intense surface mining: some 6,500 plus hectares of disturbed and mostly abandoned land and combine them with Gorj’s extraordinary solar radiation.

Broad studies conducted by the EC’s Joint Research Centre found that Gorj enjoys some of the highest generation potential of any CRiT outside of Spain or Greece.

A county specific study published this summer by the Romanian energy think tank EPG and Greenpeace charted several pathways for Gorj to transform itself from Romania’s dirtiest county to its greenest in a decade.

“We want to be the county that produces over 3GW of solar energy by 2030,” said Sipanu.

Making this goal easier, in this case, is Bucharest’s agreement – ish.

As a first step in CEO’s transformation, Energy Ministry State Secretary Dan Drăgan plans to immediately begin rehabilitating played out mine lands and install some 725MW of solar photovoltaic capacity on them.

Easily Romania’s biggest solar project, this redevelopment will “require a retrained workforce from the area,” said  Drăgan  in an interview with EnergyTransition. “We estimate that a significant part of those being laid off from CEO will be involved in these activities.”

But all parties hope this is only the beginning.

Beyond CEO’s power project, Bucharest and local leaders are intent on luring investors and EU funds to Gorj and birth a new solar panel production sector as well as electric vehicle battery manufacturing.

“We have two or three panel producers already in Romania. And just south of Gorj are several automobile factories. We could do it all here. Assembly, installation and panel maintenance – done by those who today already work on the land,” said Sipanu.

More than a ready workforce and high amount of solar radiation, Gorj has another unique advantage: one of the few deposits of minable graphite in Europe – a key component in electrolysers for green hydrogen production as well as batteries for electric vehicles.

Prior to 2000, Gorj had both an operating underground and surface mine extracting some 40,000 tons annually.

That volume of production would transform Romania into the world’s fifth largest producer, ensuring the EU a steady supply.

“Now that we have seen this huge increase in the need for graphite, the Ministry of Economy is already reviewing how we can restart exploitation,” explained Drăgan and plans are evolving to restart production.

“We are looking for partners and companies interested to come and develop production facilities near where these raw materials are produced,” he continued.

Reforming them could help millions of rural residents shift from burning wood or forest biomass for home heating to self-generate solar energy instead.

Reduced bureaucratic barriers, Drăgan says will “smooth the way for local authorities to install PV panels on schools, hospitals and city halls” too.