After years of resistance, this September Romania promised to exit coal by 2032 ahead of receiving a €29 billion chunk of NextGenerationEU redevelopment money, some 40% earmarked for green and sustainable projects. But then Bucharest’s coalition fell and a caretaker government has since announced plans for a fleet of new fossil gas and biomass plants to power the country past coal. And during COP26 they signed a partnership with the United States to construct Europe’s largest new nuclear fleet. In this series, based on field research funded by a Fellowship from the International Journalists’ Program, lead blogger and podcaster Michael Buchsbaum, trains a spotlight on Romania’s controversial energy transition. 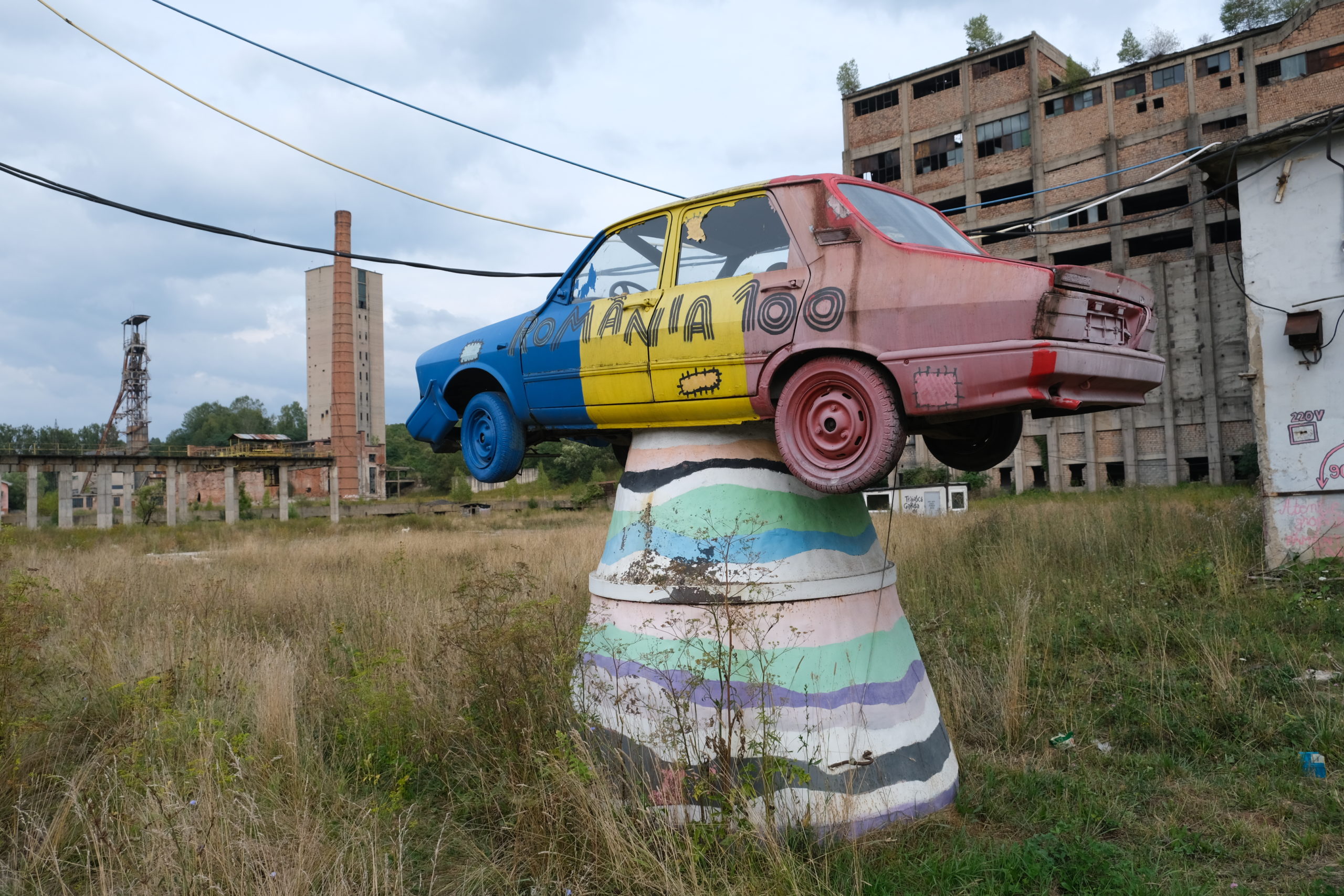 The former Petrila deep mine complex in Petrosani, Romania today is both a museum and a cultural monument. But the mining company still loads coal there, but it’s days are numbered. (Photo by © L. Michael Buchsbaum)

In late May, documents leaked out of Romania’s Energy Ministry revealing tentative plans to phase out coal by 2032 while simultaneously increasing renewable’s share of the energy mix to 33% by the end of this decade.

The revelation came just as the European Commission was deciding over whether to authorize another injection of over €1.3 billion in subsidies for Romania’s bankrupt majority state-owned energy company, Complexul Energetic Oltenia (CEO).

After appearing in a draft version of Romania’s €29.2 billion National Recovery and Resilience Facility (RRF) submitted to the European Commission, the commitment started to feel real.

Over the summer, more details of the immediately controversial transition plan emerged as the fragile coalition then running Romania struggled to meet Brussels’ terms.

And days later the government fell.

In the weeks since securing the aid, while tepidly embracing the powering past coal concept, Romania’s caretaker government has announced a string of new measures that seemingly contradict the goals of the European Green Deal (EGD).

Many of the same civil society groups, NGOs and green investors cheering in September are increasingly alarmed over Romania’s new direction, worried how the EU funds will be spent, and fearful over the precedent being set for the EGD.

Tucked in the southeastern corner of the EU, the small nation of less than 20 million – though the second poorest per capita in Europe, is stinking rich in energy.

Romania’s economy is almost one-third hydro-powered, followed by coal (21%) and wind (15%) in capacity. However Romania is also the largest producer of hydrocarbons in Central and Eastern Europe, and fossil gas today, much of it domestically produced, comprises another 15% of its electricity. Nuclear and solar also contribute another 7% each to the nation’s mixed portfolio.

Though coal’s days are numbered, offshore fossil gas, nuclear and renewables are set to fill the void.

But to actually wean Romania off coal requires not so much a technological shift as a social evolution.

Romania has long leaned heavily on its vast coal deposits to both generate its electricity and eventually ensure some semblance of national energy sovereignty. And for generations, coal has played a central role in Romania’s cultural identity.

Far from Bucharest and other cities, hard coal was discovered throughout Hunedoara County in southern Transylvania when the region was still part of the Austro-Hungarian Empire.

Thick seams of anthracite found along the valley of the Jiu River lured investors to the remote region surrounded on three sides by the Carpathian Mountains to first sink shafts in the 1840s.

Over the following century, industrial production drove ever-deeper mines beneath the valley floor as the Jiu and its tributaries ran black with waste and soot.

Jiu’s coal towns swelled into urban centers dominated by rows of nearly identical concrete blockhouses built for a veritable army of over 50,000 mine workers. As late as the 1990s, some 16 different mining complexes, coal washing plants and power stations were operating throughout the smoky mono-industrial corridor.

Hemmed in by the mountains above, Jiu’s socio-economic reliance on coal, repeatedly rocked by economic booms and busts, labor strikes, mine explosions, roof-falls and endless accidents gave it another name: Romania’s “valley of tears.”

Today only four pits and one ancient power plant are in operation, all run by the majority state-owned Hunedoara Energy Complex. Insolvent and wholly dependent on governmental subsidies, together the deep mines often produce as little as a 1,000 tons per day as HEC coal barely powers 1 to 3% of the national energy mix. 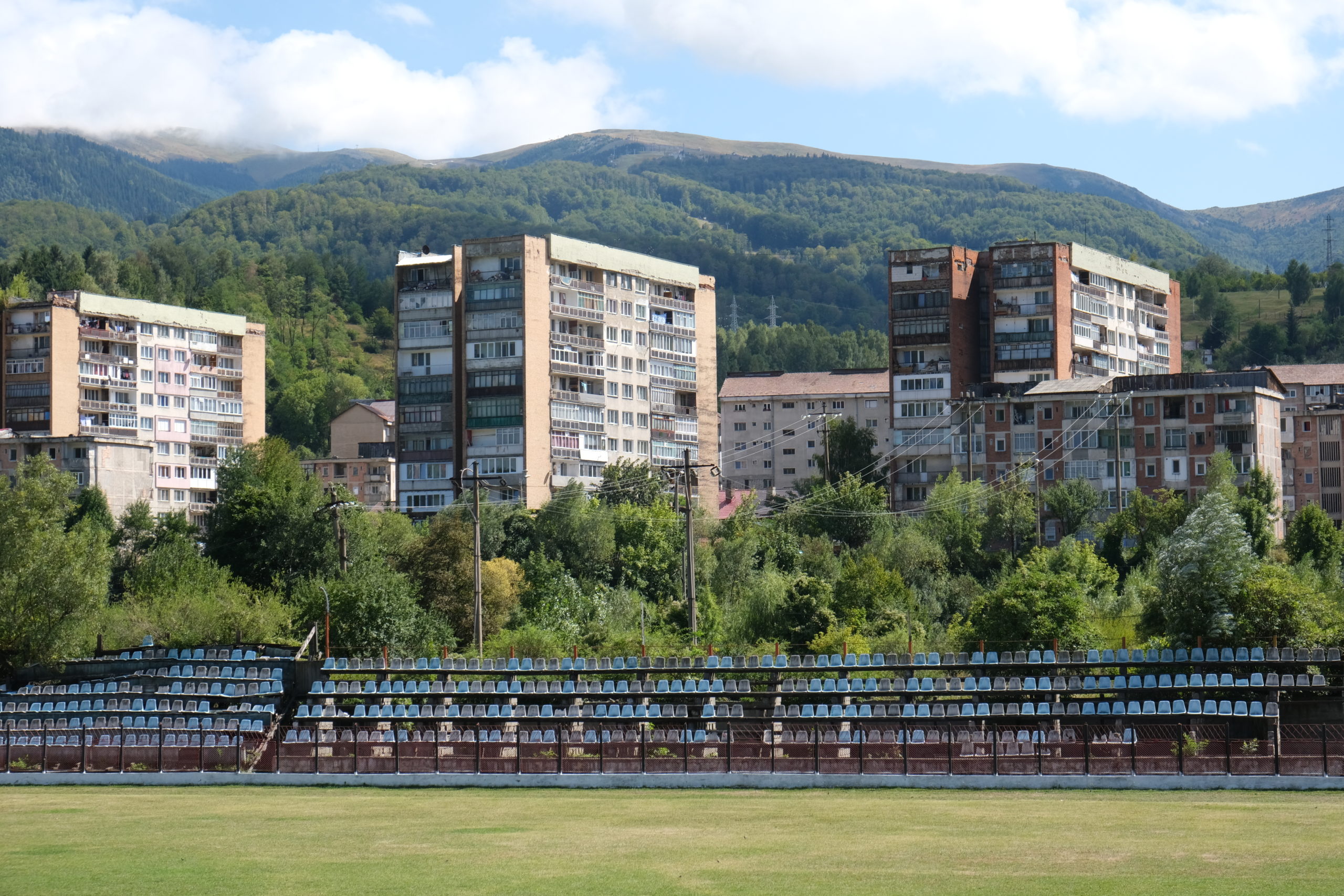 Much the Jiu valley was built to house miners, but now that those jobs are gone, the region is falling on hard times. Locals hope for a Just Transition. (© L. Michael Buchsbaum)

Several previous schemes to ease Jiu’s post-coal transition have largely failed, instead leaving it both under-populated and poorer.

And HEC still pays better than what else is available in the isolated region.

Cutting a canyon out of the Carpathians, the Jiu River cascades south through the forest-covered foothills and plains of sun-baked Gorj County.

Though its biggest city, Târgu Jiu, is prouder of its famous native son, the sculptor Constantin Brâncusi  – its economy hinges on decisions made in the downtown headquarters of the Oletania Energiec Complex (CEO), Romania’s second largest employer. 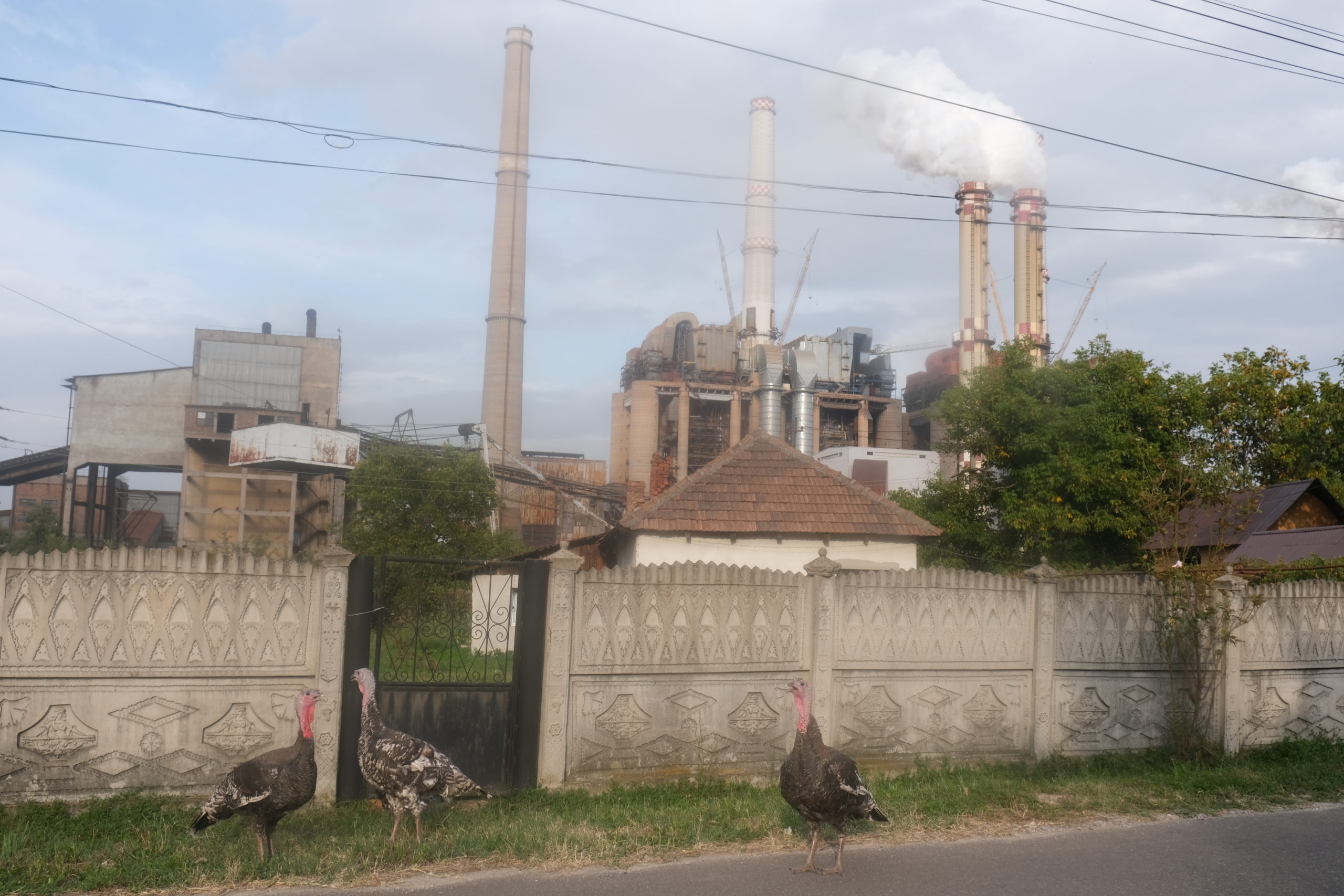 The heart of the Oletania Energy Complex is their giant lignite-fired Rovinari power plant, surrounded on three sides by surface mines and villages – where turkeys roam the streets. (© L. Michael Buchsbaum)

Insolvent and draining Bucharest’s treasury as the price of carbon rises, CEO is a state-owned vertical monopoly whose four high-capacity power plants today generate a combined 20% of Romania’s electricity needs while providing jobs for over 12,000 surface miners, plus thousands more contractors and day laborers.

Surrounded on three sides by an immense moonscape of tortured lands and expanding strip mines, the 12,000-person town of the same name lies in the plant’s shadow. Built solely to house miners and their families, the foul fumes of burnt lignite intermingle with an omnipresent clank of conveyor belts and whine of turbines, giving a uniquely toxic texture to the Rovinari’s monotonous communist-era blocs of flats.

For decades CEO’s hulking excavators have torn through Gorj’s forests and farmland to dig into vast deposits of low-grade lignite. But by powering the nation, Gorj’s carbon dioxide emissions are far away the highest in Romania.

But now that politicians in faraway Bucharest have accepted the huge pot of redevelopment funds from remote policymakers in Brussels, locals fear phasing out coal will devastate their economy. No one wants Gorj to become another Valley of Tears.

Up next, we’ll review plans for Gorj and Romania’s hopefully “green” and “just” transition.