Following advice from the World Bank, most of Romania’s coal mines started shuttering in 1997. But this pivotal sector’s collapse left hundreds of thousands unemployed with few resources to help them transition to new careers. Only now, as the nation’s last underground mines prepare to close and Bucharest plots their lignite phase-out, are so-called “Just Transition” retraining programs and other projects finally being implemented. Next in the on-going Romanian Power Move series, lead blogger and podcaster, Michael Buchsbaum, reviews the nation’s rocky steps towards a “just” coal transition. 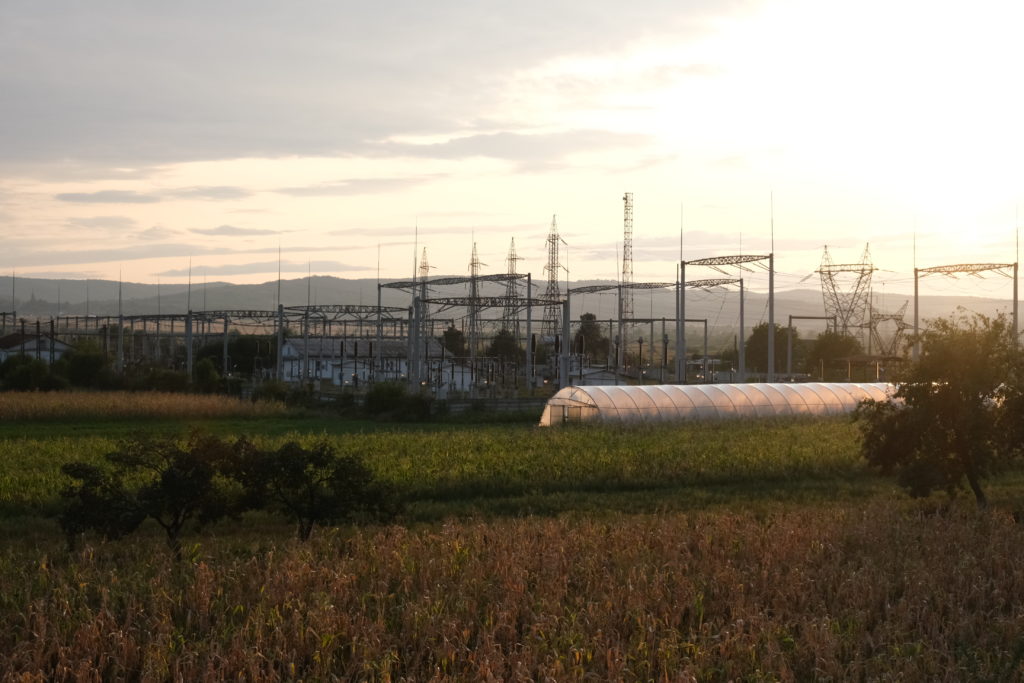 A greenhouse next to a large electrical substation adjacent to several large lignite surface mines in Gorj County. (Photo by Michael Buchsbaum ©)

After more than a century of mining, by the late 1970s some 180,000 miners were still busy wringing coal out of 14 mining complexes throughout Romania’s Jiu Valley. That changed dramatically beginning in 1997 when – following the restructuring programs imposed by the World Bank – many of the nation’s mines started closing. In a short time, some 90% of the region’s jobs were gone.

Though older and mid-career miners could retire early, as the sprawling mining operations closed, many young people fled. Since the region’s mono-industrial towns were built to house the coal miners who fueled the local economy: good work for most meant getting out. Some 40% of Jiu’s population did just that in the decade before Romania joined the EU in 2007.

“This lack of alternatives was the main issue that brought about negative consequences in the community,” related Roxana Bucata, a journalist and first year PhD candidate at the Central European University in Vienna focusing on energy transitions.

Throughout 2019 and 2020, as a Master’s student studying Just Transitions, Bucata traveled to the region to research how coal’s continuing demise was impacting the Jiu’s population.

Her interviews with local residents found “a general lack of trust towards any kind of authority or regional national union trade management. There’s been a lot of damage here,” she continued.

Now at the end of 2021, less than 4,000 miners are still pulling coal out of the valley’s four struggling deep mines. And with at least two more closures looming in 2022, most remaining workers are just hoping to stay on long enough to qualify for pensions or early buy-outs.

“We need something to replace mining jobs with,” Lucian Enculescu, the leader of the Livezeni ‘Libertatea 2008’ union said to the Guardian recently. “Anything.”

Launched in 2019, the European Union’s “Coal Regions in Transition Initiative” aims to help affected countries phase out coal and facilitate a “Just Transition” towards clean energy.

A key piece of this is the €17.5 billion Just Transition Mechanism (JTM) set to be split amongst the seven most affected European nations.

Romania, which will receive €1.9 billion in assistance, is the third biggest recipient of the JTM behind Poland (€3.5 billion) and Germany (€2.2 billion).

The funds will eventually be disturbed to 18 European Commission-designated Coal Regions in Transition (CRiTs), including the Jiu Valley and the neighboring lignite-dependent Gorj County.

Though the JTM does provide assistance for CRiTs, funds cannot be used to build new power plants. Instead JTM funding must address the social and economic costs of decarbonization by financing economic diversification and worker retraining programs.

After years of negotiations and revisions, at the end of May 2021 Romania’s coal regions submitted their Territorial Just Transition plans to Romania’s Ministry of European Investments and Projects (click here for a timeline). After their review, they will be sent to Brussels for approval.

Prior to the COVID pandemic, the first and only renewable energy re-training program for coal workers started on the Black Sea coast in Constanta. Almost completely on the other side of the nation and far from its coalfields, the training center is near most of the nation’s larger wind parks. Though it may become central to Romania’s future offshore wind sector, when funds dried up, the attempt to retrain Jiu’s coal miners quickly stalled. With the pandemic complicating further efforts, organizers pooled their resources in a desperate attempt to retrain at least one miner.

However in September 2021, a new re-skilling program offering in-person instruction opened up in the coal city of Petrosani, the headquarters of the Hunendora Energy Complex – operator of Jiu Valley’s deep mines and power plant.

To accommodate it, several classrooms in the town’s former mining school, now the University of Petrosani, have been redesigned for the newly opened Renewable Energy School of Skills (RESS).

Run by RESS with the support of the Romanian Wind Energy Association, the project aims to re-skill at least 200 miners over the next two years into wind turbine technicians.

Also funded through the Human Capital European program, the training center is the pilot project of a larger proposal to reskill some 8,000 people in the valley over the next decade.

The one- to four-month training program is free for miners to participate in. Successful graduates will be certified to start jobs in wind turbine construction or maintenance or to work on solar panel installation both in Romania or anywhere else in the EU.

During my September research trip, I interviewed one of the program’s participants. Back in 2019, Aldona had been one of the first ex-miners to sign up for retraining.

Over pizza in Vulkan, one of the Valley’s mining towns, she told about how images of her atop a wind turbine taken during a re-training publicity event near the Black Sea had gone viral.

At first the photos transformed her into something of a local symbol of a post-coal future. As that future fizzled out along with the training program, the images and the momentary brush with fame came to symbolize a far too familiar futility.

Hoping to avoid additional international attention, she requested a bit of anonymity.

Growing up in a mining family, Aldona became a certified underground electrician during her 22-year career. “I’d go back underground tomorrow if I could,” she related wistfully. “Working in coal was the most intense and exciting experience of my life. I still miss my crew.”

As the year ends, Aldona relates over social media that in January, following months of training, she’ll be travelling to Sweden to take a leading role on a wind turbine maintenance team.

“A miner can do anything,” she told me. “The job opens you up to all possibilities. Retraining only requires a change in mentality.”

Regional NGOs like Greenpeace and Bankwatch have been instrumental in helping Romania’s coal communities develop plans for a Just Transition. We explore their role next in the continuing Romanian Power Move blog and podcast series.