Ukrainian municipalities in coal regions, which are still dependent on mining, are becoming increasingly aware of the sector’s terminal decline and are scouting for sustainable alternatives for the future. NGOs and active municipalities in the Lviv-Volyn coal basin in the west and Ukrainian-controlled territories of Donetsk and Luhansk regions in the east, are joining up forces to create post-industrial green options. Oleh Savytskyi has the details. 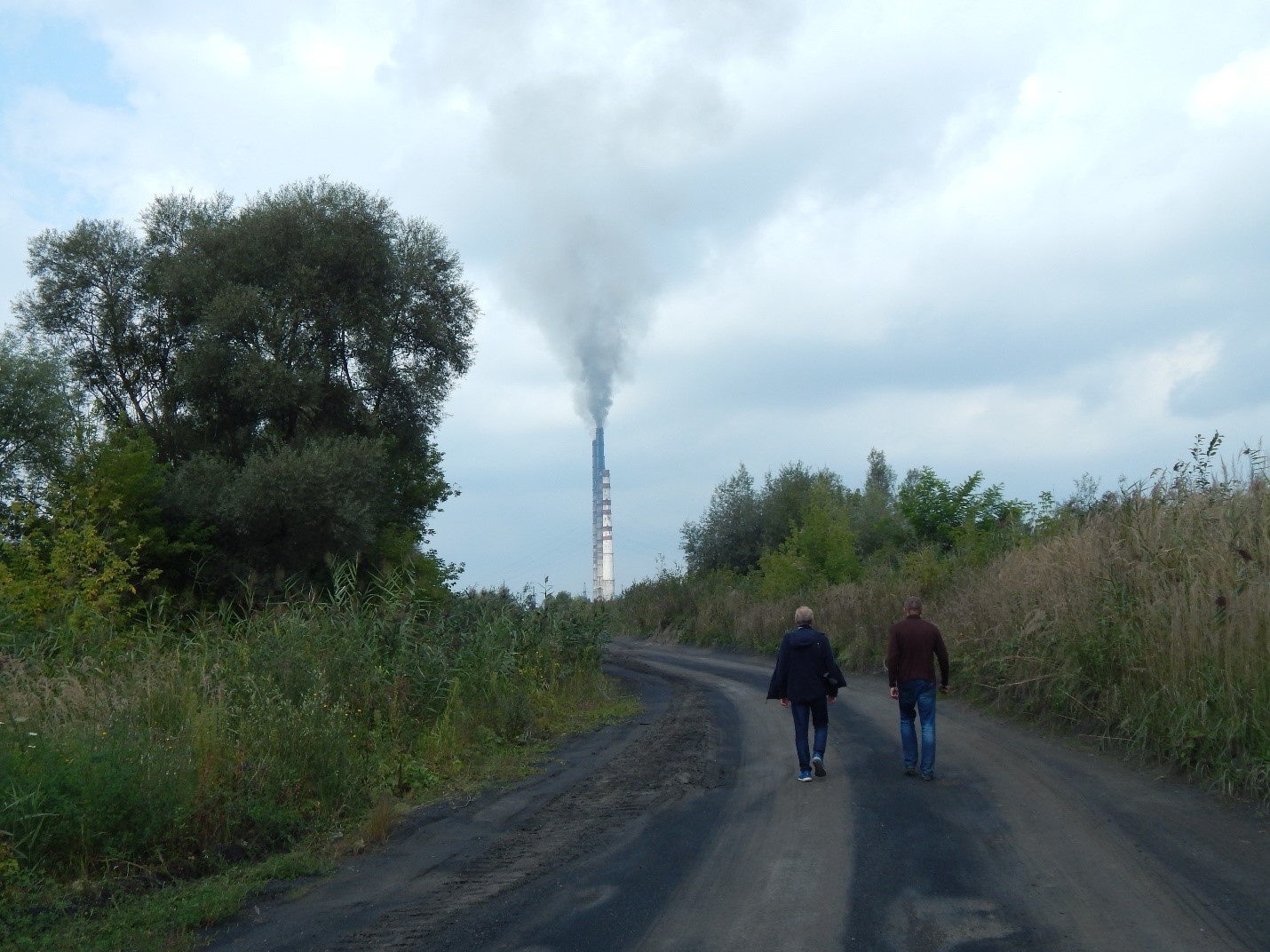 With the collapse of the Soviet military-industrial complex and the general economic downturn in the 1990s, coal production has declined dramatically in Ukraine, bringing massive unemployment and social unrest. The rebound of the coal sector, brought by political power of local elites, has proved to be short and unsustainable. Today, as a result of Russian military aggression, infrastructure and industrial assets of the Donbas coal region lay in ruin, while numerous coal mines ceased operation and were flooded. At the same time, advances in renewable energy and the need to replace depreciated industrial assets with new technologies are together pushing coal out of the country’s economy.

Ukraine’s economy and coal – forever together or divorced

In 2013, at the peak of the economic mite of the pro-Russian Party of Regions, coal accounted for 35.5% of the country’s total primary energy supply and 40.8% of electricity production. Eight years later, in the first half of 2021, the share of coal in the power sector has declined to 23.7%. Meanwhile, the share of modern renewables (mostly solar and wind) increased from 0.4% in 2013 to 7.2% in the first six months of 2021 and is forecasted to reach 7.5% by the end of the year. 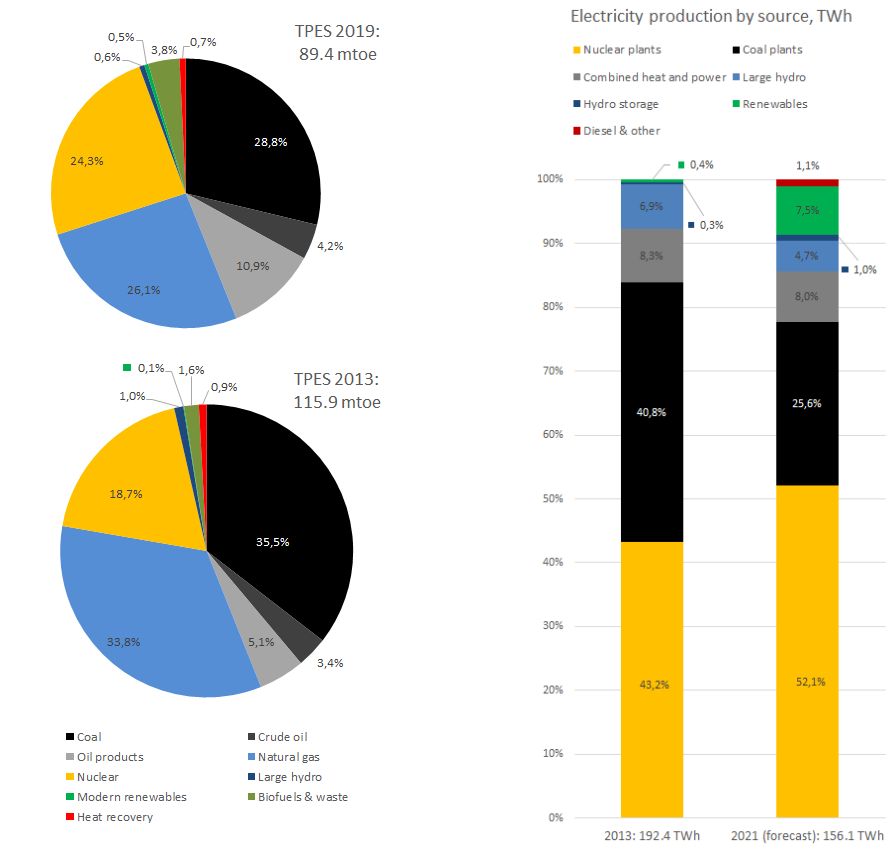 In the steelmaking sector, groundbreaking change is on the horizon too. As of 2021, more than half of coke batteries in Ukraine are being operated overtime, having long passed the normative service life of 25 years. Along with high emissions of a variety of toxic substances in the environment, they are costly to run due to high maintenance costs and low efficiency.  The same is true for the blast furnaces, which use coke as feedstock to produce pig iron from ore.

The world’s leading steel producers are now building their future on a new, coal-free technology chain, which uses direct reduction of iron (DRI) for ore processing and electric arc furnaces for steel production. As of 2020, global output ore processing with DRI technologies already exceeds 100 million tons and is growing rapidly. It is obvious that with the expected introduction of international carbon regulation, these solutions will gain additional competitive advantages over technologies using coal and coke.

Management of Metinvest corporation, which has consolidated major metallurgical assets in Ukraine and also has production facilities in Europe, is well aware of these developments. In July Metinvest sponsored the international forum “Decarbonization of the steel industry” in Kyiv, while its CEO Yuri Ryzhenkov announced the development of a roadmap for transition of production to hydrogen-based DRI and electric furnaces. At this forum he signed memorandums with two engineering companies – Primetals Technologies and K1-MET – which will provide respective expertise.

Thermal power and metallurgical sectors, which together account for more than 90% of coal consumption, are clearly moving away from the dirtiest fossil fuel, but divorce of Ukraine’s economy with coal will not be easy.

How phasing out coal could improve Ukraine’s troubled power

Levels of hazardous emissions at Ukrainian coal-fired plants exceed the EU standards for large combustion plants by up to 40 times. The total cost of retrofits necessary for existing thermal power plants to meet requirements of the Industrial Emissions Directive is estimated at 2.6 billion euro. In many cases full scale retrofits would be economically unfeasible, as most of thermal power plants will be forced out of operation by technical and economic factors well before they can provide return on investments in costly desulphurization equipment and measures for reduction of NOx emissions.

After an investment surge in 2018-2019 attracted by lucrative feed-in tariffs, solar and wind have demonstrated at scale their huge development potential in Ukraine, which is more than sufficient for a complete replacement of coal in the power mix. There is no doubt in the power industry that coal capacities will be replaced eventually by other technologies, the main questions now are when and who will benefit from it.

According conclusions, drawn by technology company Wartsila Energy from their modelling of Ukraine’s power system, upgrading coal-fired power plants is much more expensive than decommissioning them and makes the system more vulnerable to climate risks, while investment in renewable energy sources (RES), as well as batteries and balancing gas capacity, in the long run can provide significant cost savings at the system level. Financial part of modelling has shown that integrating 32 GW of new RES and flexibility options in Ukraine by 2030, will save about 500 million euro a year in total running costs and will reduce prices for consumers. It will also diversify sources of energy and reduce reliance on nuclear power plants, most of which have already received lifetime extensions and will have to be decommissioned eventually.

Coal was a cornerstone in the economy of the Ukrainian Soviet Socialist Republic, powering its massive metallurgical industry and one of the biggest fleets of thermal power plants in Europe. However, things are changing. Since 2014, after the escalation of military conflict in Donbas, Ukraine’s coal industry entered terminal decline.

The new research study “The economic implications of phasing out coal in Ukraine by 2030” conducted by AURORA Energy Research with support of the Kyiv office of Heinrich Böll Foundation explores how the current window of opportunity could be used to speed up the transition to a cleaner power mix for the future. Coupled economic and power system modeling shows that a coal phase-out in Ukraine’s power sector can be completed by 2030, bringing positive cross-sectoral effects, which aligns with conclusions of earlier findings of Wartsila experts.

While the coal industry with current policies in Ukraine is projected to accumulate losses of more than a billion euros over the next decade, a coal phase-out can reduce the burden on the state budget and create new jobs in the renewables, construction and manufacturing sectors. The closure of state-owned coal mines will result in the loss of 36,000 jobs by 2030. Instead, 161,000 jobs will be created, including 44,000 which will be permanent. According to the simulation of a coal-free power system, it can deliver a stable and balanced supply from the mix of modern renewables, nuclear, big hydro and flexible gas capacities, while greenhouse gas emissions will be reduced by 84% by 2030.

A just transition for coal regions

In May 2019, mayors of six coal mining towns in Donetsk region, three local non-governmental organizations, and the Donetsk Chamber of Commerce and Industry united in Platform for Sustainable Development. Since then it has expanded to include nine municipalities.

During 2020–2021, thanks to support of international and Ukrainian partners, the Platform has been developing its own bottom-up transformation strategy, including strategic goals, concrete objectives and ideas for potential projects. The Platform aims to support the development of small and medium size businesses, as the backbone of its communities’ new, diversified economies. It also puts a special focus on RES, energy efficiency measures and education.

Members of the Platform, while building the structural transformation policy from the ground up, also demand that the central government and legislators take a more active and responsible role. For a just transition, a clear and reliable final date for a coal phase-out should be set at the national level and enshrined in legislation and sectoral policies. Considering Ukraine’s huge potential for modernization and the widespread depreciation of coal-based assets in industry and power sector, this transition can stimulate new investments in carbon-neutral technologies, bringing major benefits for the environment, public health as well as ushering in an era of sustainable economic development.