Despite the further decrease in coal power generation, Germany probably failed to reduce its carbon emissions last year, largely because of backsliding outside the power sector. Which source of energy makes up the biggest piece of the pie in Germany? Craig Morris has the answers.

Just before Christmas, the AGEB – a group of economists and energy sector representatives – produced its estimate (press release) of German energy consumption for the year. Obviously, the numbers are estimates – but also a reliable starting point until the official numbers are produced this summer. 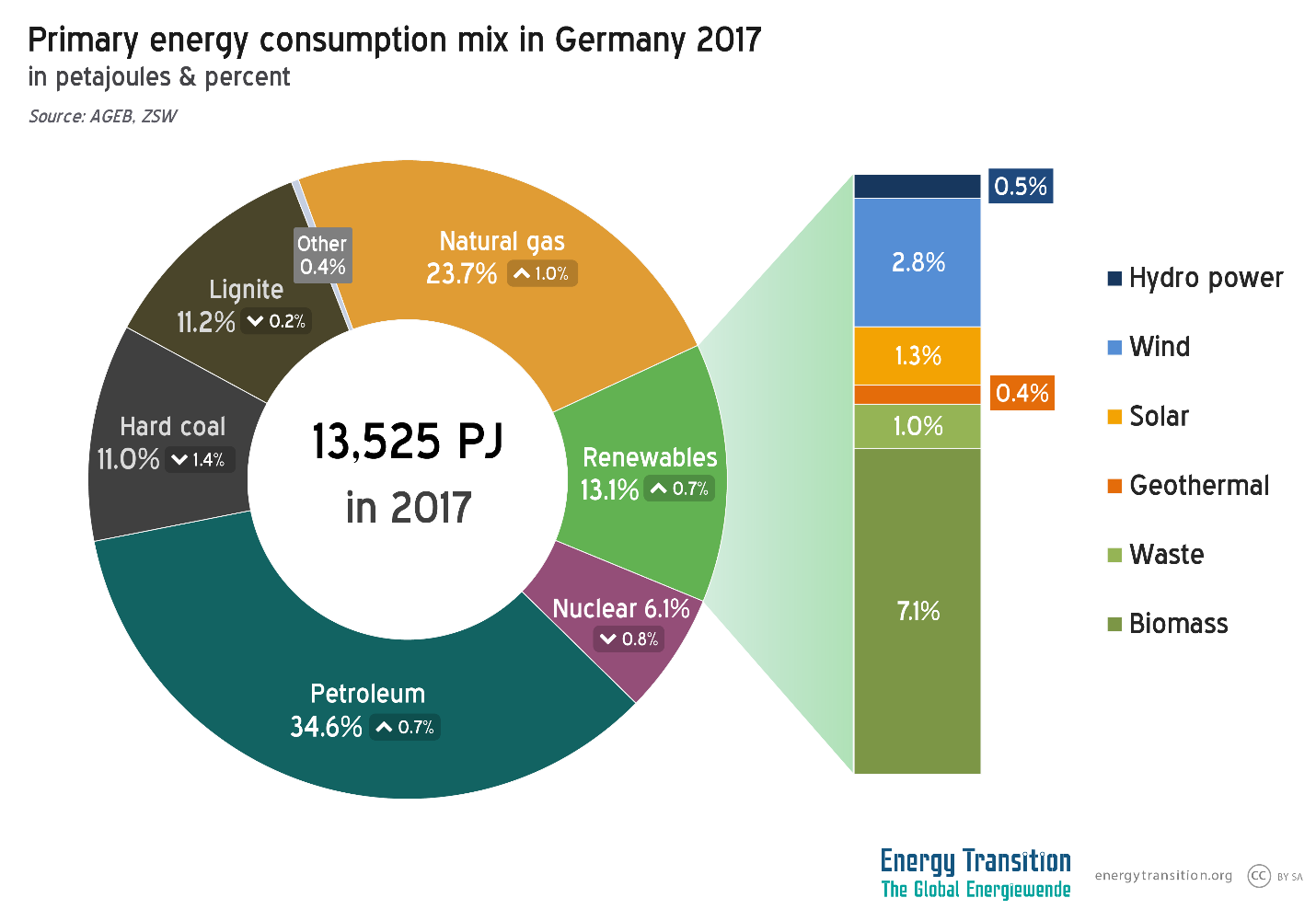 Fossil energy still makes up more than 80% of German energy consumption. Oil is by far the biggest source of energy at more than a third, followed at some distance by natural gas at just below a quarter. Even taken together, lignite and hard coal come in only third slightly behind gas.

For the second year in a row, energy consumption is expected to have increased, this time by 0.8% “primarily due to the positive economic trend.” (GDP probably grew by more than 2% and hence more than expected.) Still, the consumption level last year was roughly on par with the economic crisis year of 2009 and a good 10% below the record year of 2006. As previously reported, renewable electricity grew by a record amount and percentage, while both coal and nuclear shrank.

But natural gas grew not only within but also outside the power sector – by 5.2%, in fact. The AGEB says the main driver was demand in cogeneration units, which produce both power and heat. Likewise, oil consumption grew by 3%, mainly as gasoline and diesel in cars.

The share of renewables in the primary energy consumption reached 13.1% last year. If that number seems low, remember that most renewable energy is found in the power sector, which only makes up around a fifth of German energy consumption, roughly half of which is heat, with mobility making up the remaining third. Germany has an official target of 18% renewable energy (not just electricity) by 2020, but those targets for EU member states are defined in terms of final, not primary energy. The share of renewables in final energy is generally higher (see this blog post), but that number will not be known until later this year. It is likely to be around 16%.

No official figure for carbon emissions is yet available either; the AGEB merely speaks of “stagnation.” But the lack of progress comes at a bad time: Germany only has three years left for an additional 10% carbon reduction to reach its 2020 goal (which, for what it’s worth, no one ever considered realistic).

Nonetheless, things are happening to reduce coal power. Municipal utilities closed six hard coal power plants in 2017 for economic reasons, and a number of lignite plants were retired in a reserve (in German). While more progress is needed towards a coal phaseout – coal is the main source of carbon emissions although it is “only” Germany’s third-largest energy source – experts are now focusing more on aspects outside the power sector.

For instance, think tank Agora Energiewende, which produced a useful slide deck overview in English of the power sector in 2017, listed three reasons for continued high emissions in a press release. The third was coal power, but the first two were the transport sector and industry.

At present, the Christian Union and the Social Democrats are negotiating a new governing coalition. Reducing emissions by more than three percentage points annually over the next three years would be extremely hard, though proponents of renewables do have a few suggestions.

By shutting down its 20 dirtiest coal power plants, Germany could cut emissions by 50M tons and reach its 2020 climate target. More important, this 130-year-old heritage church could have been saved from bulldozers of King Coal. pic.twitter.com/pzsYQhNNzH

Little has leaked from the coalition negotiations aside from an energy paper. Most reports focused on how the politicians have abandoned the 2020 target altogether, but there was actually a lot of substance to the proposals. Top decision-makers may now finally admit that the goal is out of reach, but they remain committed to shrinking the gap.

In the coming weeks, we may see a coalition come about along with specific proposals. There will be much to review in 2018.