Last week, we discussed changes in the German power sector in 2015, particularly how Germany is scheduled to overshoot its target for green electricity. Today, we focus on all energy (power, heat, and motor fuels). To our surprise, the target of 18 percent renewable energy by 2020 is not out of reach. Craig Morris explains. 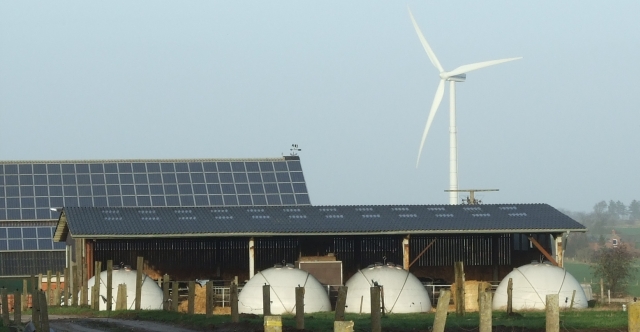 The progress in 2015 – an increase of possibly 1.8 percentage points – would be the largest in history if our calculation proves accurate. (Photo by Florian Gerlach, modified, CC BY-SA 3.0)

In 2015, German energy consumption rose by 1.3 percent according to preliminary figures published just before Christmas by the AGEB, an independent group of economists and the sector experts (press release). The organization attributes this increase to three main factors: slightly colder weather, which increased demand for heat; 1.8 percent economic growth; and more than one percent population growth (more than 1 million refugees came to Germany last year). Adjusted for the weather affect alone, energy consumption was down by 1.5-2.0 percent.

Consumption of natural gas was up by 0.6 percentage points primarily because of greater demand for heat (its share fell in the power sector). Likewise, the share of nuclear fell by the same amount because a nuclear reactor was switched off. Otherwise, coal consumption remained practically unchanged, as did petroleum demand. But the share of renewables increased by 1.1 percentage points to reach 12.6 percent. 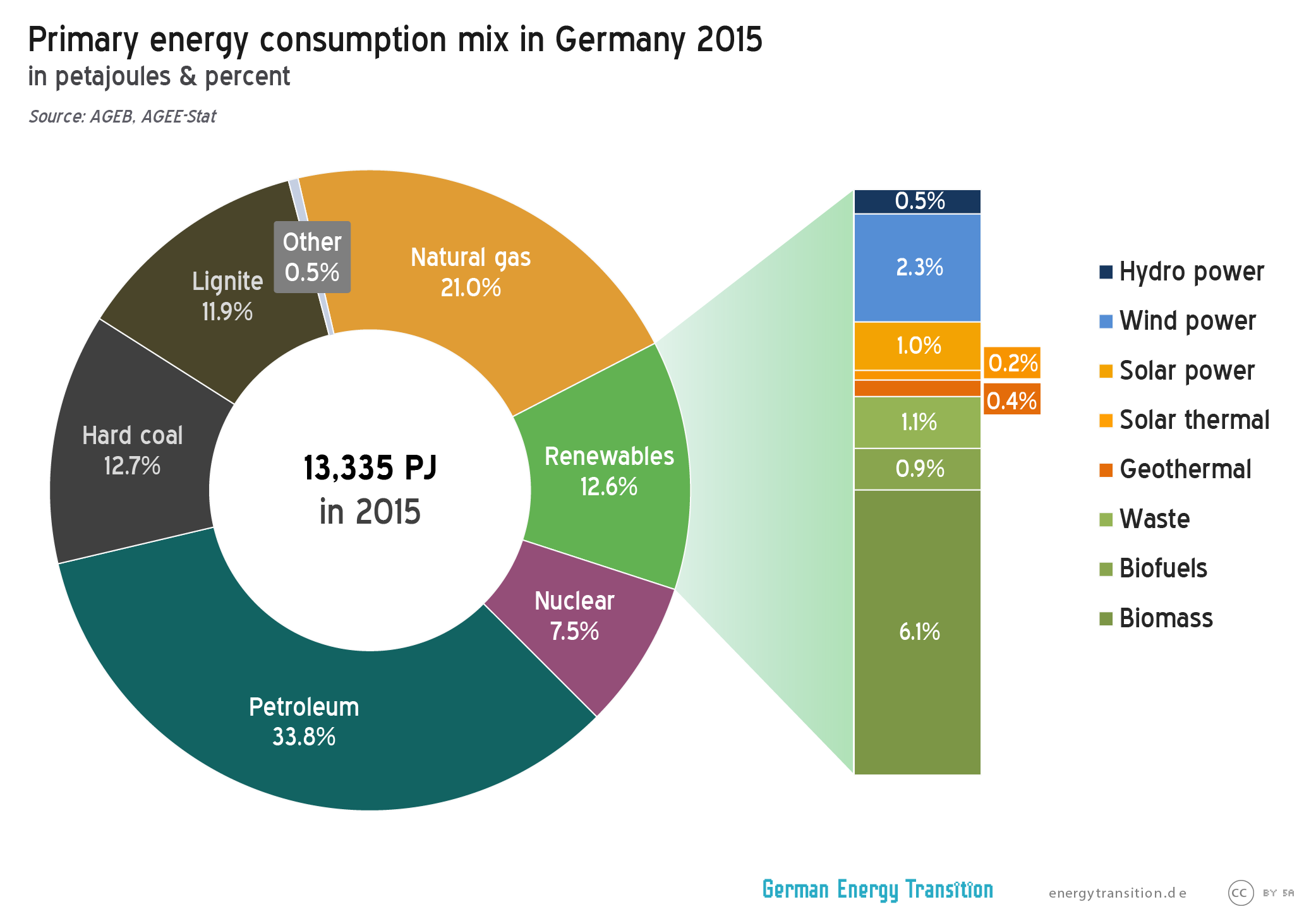 Germany has another five years to reach 18 percent renewable energy by 2020. From 2011-2015, the increase was a very modest 1.8 percentage points. Adding on that amount for the five remaining years up to 2020 only brings us to 14.4 percent, far short of the target.

But there’s a problem with this calculation – it’s based on primary energy, whereas the EU targets for renewable energy are based on final energy. (Primary energy is a lump of coal or a tank of gas; final energy is the electricity from that coal or the motive energy from that gasoline.) When we adjust for this difference, we find a much different outcome. 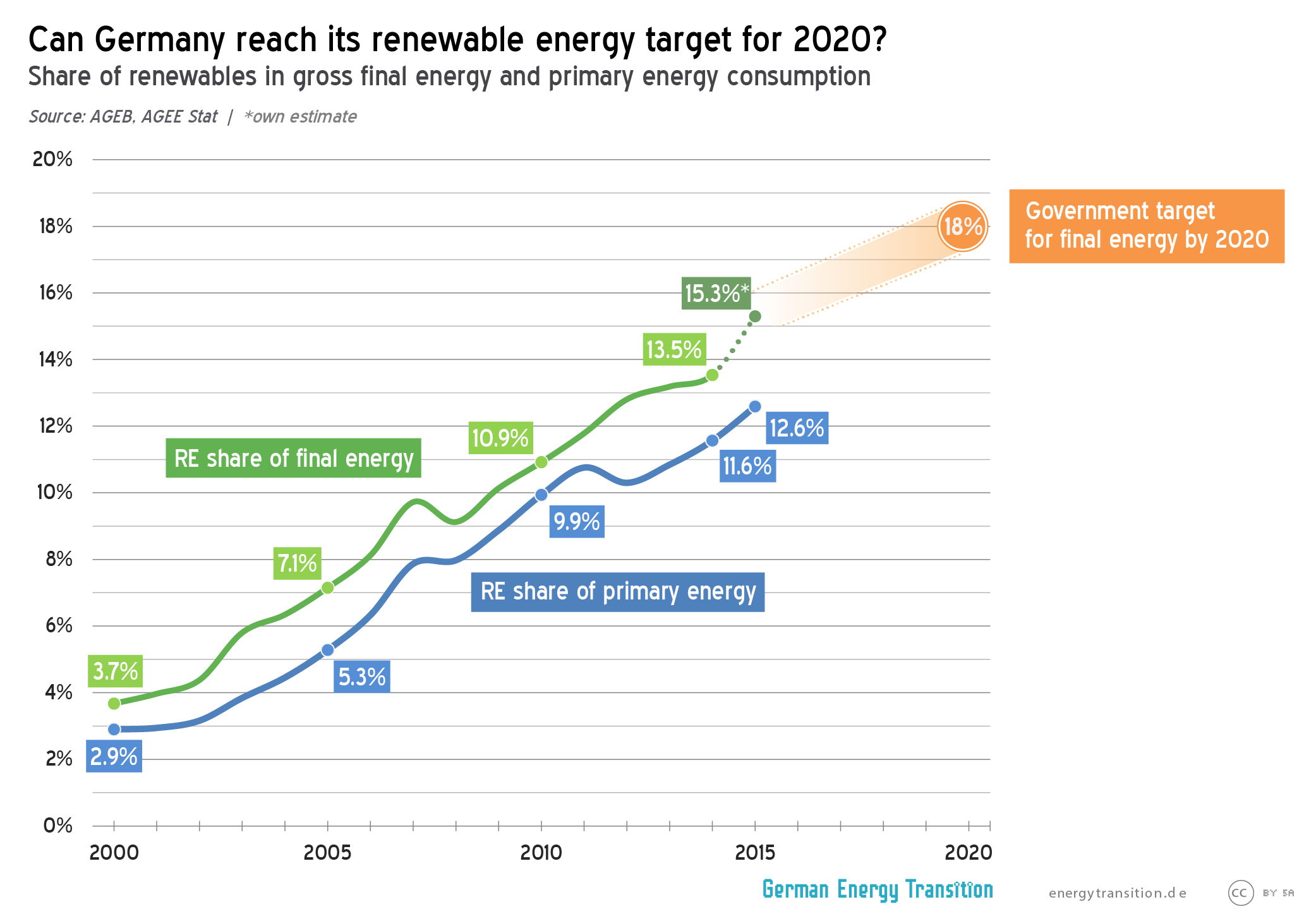 In terms of final energy, the share of renewables grew from 11.9 percent in 2011 to 15.3 percent in 2015, an increase of 3.4 percentage points over five years. At that rate, Germany would overshoot its 2020 target to reach 18.7 percent renewables.

However, no official estimate has yet been produced for final energy. The calculation is abstract; we know how much electricity was generated, but the calculation of final energy for all the heating systems around the country and for motor fuel used in the country’s more than 40 million vehicles is based on certain assumptions (such as the average efficiency of heating systems and vehicle gas mileage). It will be some time before that number is published, but as long as it does not drop below 15.0 percent, Germany will remain roughly on target for 2020.

Still, some caveats remain. The progress in 2015 – an increase of possibly 1.8 percentage points – would be the largest in history if our calculation proves accurate. (To produce our estimate, we merely took the ratio of final to primary energy from 2012-2014, in which no nuclear plants were shut down – any such change would affect the ratio, which we found to be fairly close to 2:3 for those years). It is not completely unprecedented, however. In 2007, the share rose by 1.6 percentage points, mainly because bioenergy grew strongly that year; in addition to growth in the power and heat sectors, biofuels were at at 47 TWh that year (they have since fallen to around 35 TWh). The growth in 2015 clearly came from wind power in the power sector, and that is the only renewable energy source that will continue to grow by 2020. Solar now fails to reach the annual growth target, and the government has also slammed the brakes on bioenergy.

The good news is that, thanks to a bumper year in 2015, the 2020 final energy target has moved back into reach. And with five years left, the country still has time to tweak policies so that the target is reached. More electric mobility would provide space for renewable power to grow in the transport sector, and electricity could be used as a heat source when renewables push conventional power plants down to low production levels. Unfortunately, not much is happening with either option. It will be a close race.