China has by far the most jobs in the renewable energy sector on a worldwide basis. However, during the energy transition, the job losses in the conventional energy cannot be offset by the growing PV market. The Beijing based Rock Environment & Energy Institute (REEI) explains the employment impacts of renewable development in China.

China gets many jobs from its conventional energy sector. If the country reduces the proportion of coal generation in a relatively short period of time, this will surely lead to job losses even if we take into consideration the country’s growing renewable energy sector. Therefore, Chinese policy makers today have to think about the job aspect of its energy transition and prepare for any subsequent challenges along the way.

After comparing and analyzing recent reports and data on employment issues of the Chinese renewable energy industry, we think that the energy transition’s effect on employment figures might face two main challenges in the period of 2020-2030. For one, the job numbers in the conventional energy sector will decline, and the PV job numbers will slow to grow as fast as they currently do. The first problem is largely due to historical burden of coal’s dominance in China’s energy system, which is set to decline considerably over the next 10-15 years. The second problem is that PV will not be able to offset the loss in job numbers in the coal sector under current government policies.

Based on the existing research on employment impacts of renewables development, we speculate that there will be a turning point of employment in China’s energy industry in 2030. By then, the development of renewable energy will have reached a certain size to offset the job losses in the traditional energy sector, and will then result in a steady increase in job numbers in entire energy industry.

Currently, China accounts for around 40% of global PV jobs. PV jobs provide the largest share in renewable energy jobs; in 2014, the employment reached 1.6 million, a 4% year-on-year increase. This growth was due to the increased global demand for PV and to the dramatic growth in domestic installed capacity. The high proportion of employment in China’s solar industry is closely linked to the country’s role as the world solar manufacturer. 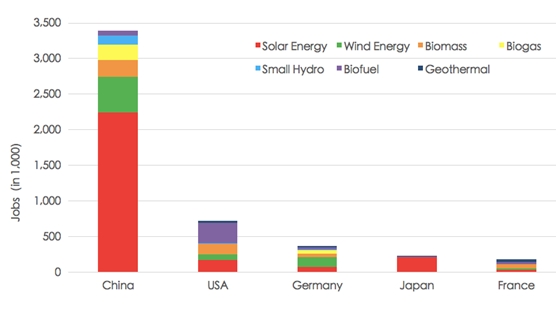 If we examine the job numbers per megawatt (MW) the ratio was close to 60 jobs per MW in China in 2014, approximately 4 times the world average. In the long run, however, the job numbers in China’s PV industry will likely decline due to increasing technological competition, alleviation of industrial overcapacity and improved productivity. If we assume that the year 2020 will be a tipping point for job numbers per megawatt, then the decrease in new jobs will coincide with a decrease in net employment figures for the entire energy sector (we mention this in our first point) in the period of 2020-2030.