Over the past year, the Anglo world has become interested in nuclear as a complement for wind and solar towards “deep decarbonization,” or a (nearly) 100% carbon-free supply of energy or possibly just electricity. Today, Craig Morris reviews a few papers by Americans and Australians and advises them to tackle the best European studies for 100% renewables head-on, not ignore them.

The first paper is by Stephen Brick and Samuel Thernstrom. Thernstrom has been calling nuclear “an essential part of the puzzle” since at least 2010. The paper is peer-reviewed; unfortunately, none of the reviewers noticed the oversights I found. But let’s start off with a contention the authors state in the introduction:

“In seeking to demonstrate that renewables can by themselves replace all fossil fuels and nuclear energy, these studies run the risk of treating renewables as a societal end in itself, instead of just one among a suite of technologies that could be used to achieve the combined goals of environmental protection, cost-containment, and electric system reliability.”

Why shouldn’t renewables be an end in themselves? Assuming nuclear power (plus whatever) is the cheapest low-carbon option, might other impacts society dislikes relativize the low price? To name just a few examples (and we’ll leave out whatever nuclear risks may or may not exist):

But let’s get back to the gist of the paper, which reviews three studies allegedly “arguing that the GHG reduction burden can be met solely or mainly by renewable energy alone,” one of which is Kombikraftwerk (meaning “combined power plant”), which I have discussed before. Yet, the German study does not argue any such thing (PDF in English). Rather, it investigates whether power supply can remain reliable if based largely on wind and solar without any rotating masses from coal or nuclear plants, including black starts. It does not address heat and mobility at all. Across 220 pages, the following words are never used:

“CO2” is mentioned four times, but only in the context of producing methane from hydrogen (our current gas turbines, stoves, etc. fired with natural gas can run on methane, but not on pure hydrogen, so we’d get to keep all our stuff if we had methanized H2). Strangely, in their paper from April 2016, Brick & Thernstrom reference only Kombikraftwerk’s website, not the full study from 2014. They do not seem to have read it, for they mention no aspects in it; my colleague Thomas Gerke and I covered it across eight blog posts in 2014 (work your way back from here).

Now, on to an outdated Danish paper…

The story gets even better when we consider this peer-reviewed paper by Heard et al., a group of Australian and US-based researchers, entitled “Burden of proof: A comprehensive review of the feasibility of 100% renewable-electricity systems.” Comprehensive? It doesn’t mention Kombikraftwerk.

It does, however, criticize a 2009 paper co-authored by Brian vad Mathiesen on such a 100% renewable scenario for Denmark, giving it one out of four points. The criteria for the scoring of the papers reviewed are strange:

It is not possible to state grid needs (3) without focusing on a particular country, so the findings would not necessarily be transferrable, and even then you have to decide between two types of supply concepts: 1) a focus on central plants where solar and wind resources are the best, but requiring more power lines; and 2) a more distributed supply system based on smaller solar arrays on suitable buildings and small wind farms scattered around – but requiring fewer long-distance power lines because the generators are installed closer to points of power consumption. In other words, grid expansion is partly a political decision.

Second, Kombikraftwerk addressed reserves (2) and ancillary services (4). But Heard et al. focus on peer-reviewed literature, which is usually limited to 8,000 words – quite a short space for all four criteria. Examples of simulations include Kombikraftwerk at 220 pages. The main US simulation, NREL’s Futures study from 2012 on 90% renewable power, has four volumes, the first of which (PDF) is 280 pages long.

Furthermore, the “hourly, half-hourly, and five-minute timescales” that Heard et al. want do not represent anything the grid needs, but rather reflect the (limited) capabilities of rotating masses in conventional power plants. The grid needs reactions by the millisecond. Batteries do that best, such as the grid-attached ones made by Germany’s Younicos – a spin-off of the German solar sector.

Finally, requiring “consistency with mainstream energy-demand forecasts” (1) is a joke given the poor performance of past mainstream forecasts, which have overestimated power demand and underestimated both solar and wind.

In contrast, the renewables camp sees efficiency as crucial because, for instance, we don’t have enough sustainable biomass to support our wasteful habits today. In addition to efficient devices, “sufficiency” – changing lifestyles to make do with what Mother Nature gives us – is therefore crucial. Switching to an electric car is not enough; we will need to walk and cycle more, both of which require compact neighborhoods (a societal, not technical, issue).

Heard et al. thus mistake a scenario assumption for a forecast: “Twelve (50%) {of the studies} relied on unrealistic forecasts of energy demand.” But when Greenpeace’s Energy (R)evolution or the WWF speak of far lower primary energy demand, they are saying IF demand is lower THEN a high share of renewables is possible (disclaimer: I was the editor of the 2015 edition of Energy (R)evolution).

By design, Heard et al. is biased against renewables in deducting points for scenarios based on reduced primary energy demand – because there are no scenarios for high shares of renewables with the high demand levels Heard et al. insist on having.

“The Energy [R]evolution scenarios are target-oriented scenarios. Therefore, they must not be interpreted as a ‘forecast’ of the future development of the energy systems.”

What’s worse, in their 2017 paper Heard at al. discuss Mathiesen’s 2009 paper on a 100% renewable Denmark as though nothing had happened since. The six-page summary (PDF in English) of the follow-up 2014 scenario is admittedly sparse on details, but we can see a plan taking shape. In 2015, Mathiesen, not unknown to my readers, and his team then fleshed everything out in a 159-page PDF (in English), including a new scenario called the IDA Energy Vision. As you can see below, biomass is still based as much as possible on waste, and the rest is mainly wind power. This is what a 100% scenario looks like when you do the footwork for a given country. It would look much different in, say, Saudi Arabia, with very little wind but ample solar. It would also look different in countries with lots of hydropower. One conclusion is thus that investigating 100% renewables is hard without saying where. 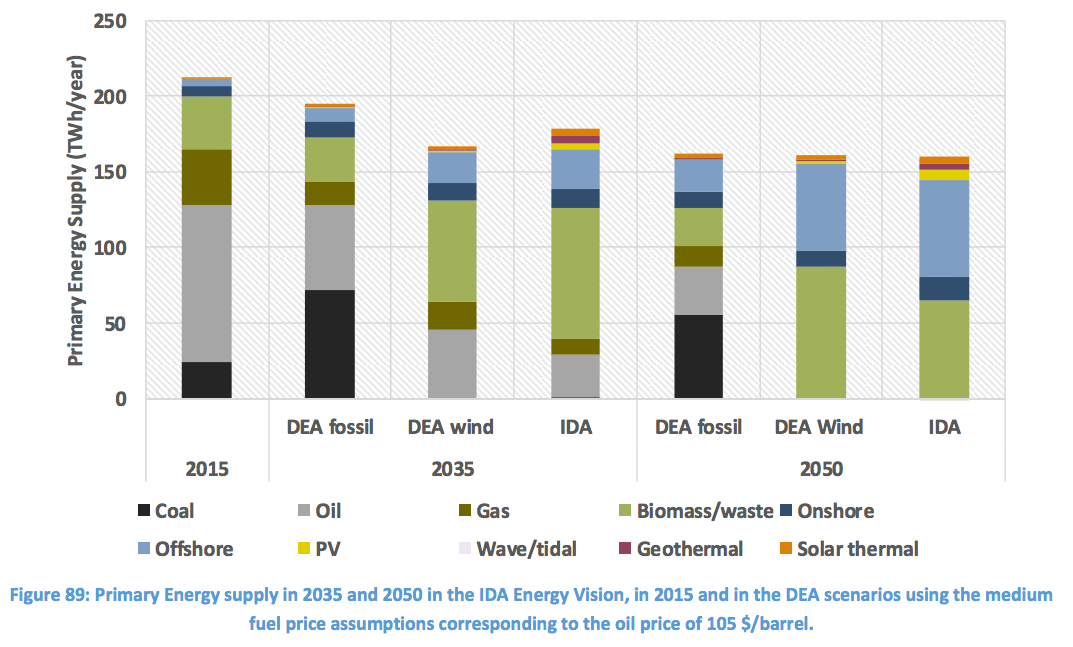 Look, ma: the results of my simulations! Source: IDA Energy Vision for Denmark.

In the end, we are left with a discussion in the English-speaking world held by nuclear advocates about 100% renewable energy, in which too little notice is taken of the main studies in two leading countries investigating “deep decarbonization” without nuclear or CCS: Denmark and Germany. What’s worse, not a single journalist covering these papers, including Vox.com’s David Roberts (one of the best) pointed out the oversight. America’s best minds write about 100% renewables, and no one notices the gaps. As President Trump might say: sad.

I’ll close with an example of the different mindsets. The Germans have concluded that simply calculating a certain amount of nuclear power at a certain price, as American studies generally do, won’t work with lots of solar and wind. You have to include nuclear ramping: less electricity generated per reactor. As my German colleagues put it, “profile costs… have received {the} least attention in the literature.”

In my next post, I focus on Roberts’ notion that nuclear is dispatchable. As a teaser, you may want to (re)visit my previous articles on nuclear ramping. Just use the search box.

{This text was updated to show that Heard et al. are Australians, not Americans, and that the Heard et al. paper discussed here was not reviewed by Thernstrom and Jesse Jenkins, but published later.}