With Tesla’s announcement of battery storage systems for households, storage for photovoltaics has become a major news item. Furthermore, one of the main questions about the energy transition is how the grid will be stabilized without central power plants. Craig Morris visited German battery firm Younicos and got an answer to this question. 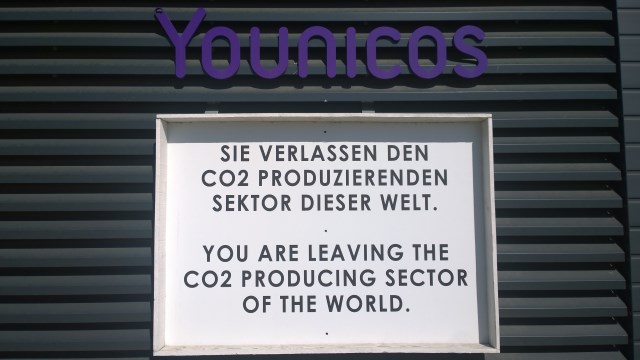 Batteries are a key technology for a decarbonized world. (Photo: Craig Morris)

Walk into Younicos’ test facility on the outskirts of Berlin, and you see a conference room intentionally designed to look like the bridge of Starship Enterprise on Star Trek (see image below). Inside, there is even a portrait of Lieutenant Uhura. Below the bridge, we see a miniature, but operating medium-voltage distribution station that the firm uses to test its battery systems. Here, the firm is testing a future technology: battery storage. 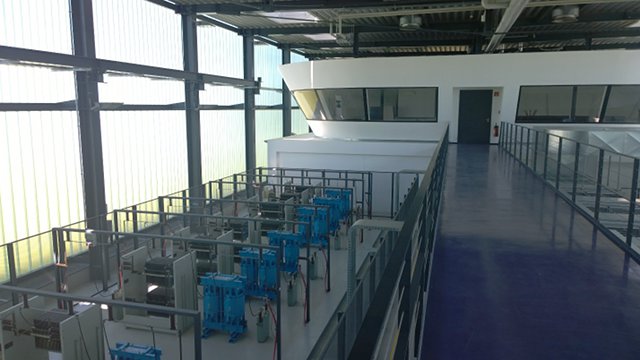 Unlike a lot of other battery storage firms in the renewable energy sector, Younicos focuses on large grid-attached storage, not small residential battery packs. “Our 1 MW unit is good for grids with at least 1,000 households,” explains press spokesperson Philip Hiersemenzel. The company has made news for its island projects, such as in the Azores, but also for grid-stabilization services within Germany. But what does that mean?

First, it means that the company is not doing what most people think of when they hear “battery storage.” The firm does not purchase electricity when prices are low and sell when prices are high (a process called “arbitrage”). Rather, it stores and dispatches electricity as an “ancillary service,” meaning that the goal is to improve the quality of grid electricity.

A few years ago, German researchers at Fraunhofer ISE pointed out that the need for power storage is not directly related to the share of fluctuating wind + solar, but rather to the share of wind + solar in combination with must-run baseload plants – those that cannot switch off and on rapidly. What we need is therefore grid-attached storage, and the power stored would be a combination of renewable and conventional (essentially, whatever is in the grid lines at the time).

Get rid of inflexible baseload – exactly what Germany is doing with its nuclear phaseout – and you push back the need for power storage. But battery storage can nonetheless play a crucial role already.

Researchers from Fraunhofer IWES (not ISE!) also found last year that battery storage will make power storage more reliable. The chart below shows how conventional “rotating mass” power plants react in 15-minute increments. “Rotating mass” means the spinning generators within conventional plants, which can speed up or slow down slightly as need be to stabilize the frequency on the grid. The grid frequency drops when more power is taken out of the grid than put into it; likewise, frequency increases when more power is pushed into the grid than taken out. Power plants adjust production ever so slightly to stabilize the frequency within a tight range (around 50 hertz in Europe). But as we see below, the blue line representing power output is only an approximation of the yellow line representing frequency. 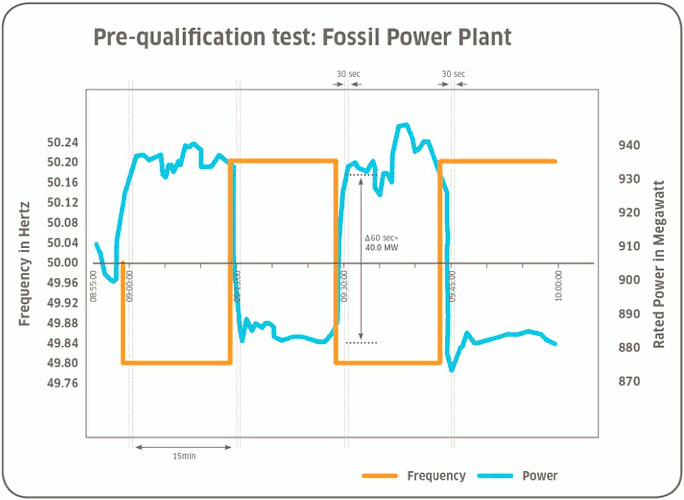 The second chart shows how well a battery can react. Here, adjustments are nearly simultaneous, and accuracy is greatly improved. Skeptics of renewable energy wonder how the grid will be stabilized as we switch from rotating masses in conventional plants to PV and wind. In reality, grid frequency will be much more stable after we switch from rotating masses to electrical controls (in fact, wind turbines and large PV arrays already provide ancillary services in Germany). Younicos’ battery systems are more flexible overall than conventional rotating masses. “The 15-minute range does not represent what the grid needs anyway, but rather what conventional power plants are capable of,” Hiersemenzel says. “Our storage systems have much more flexible reaction times.” 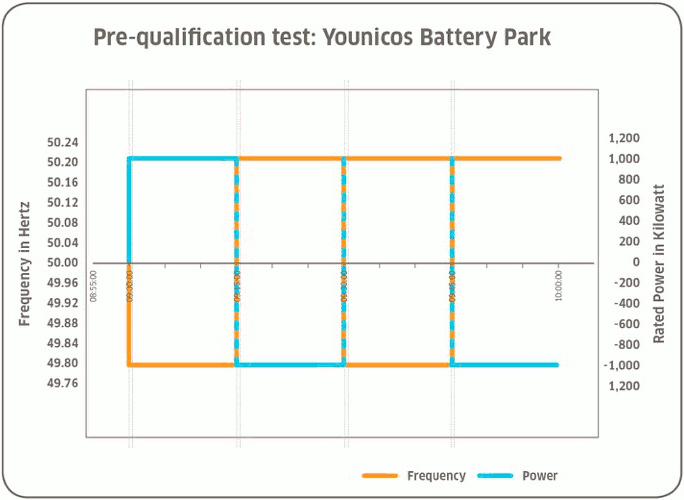 For the midterm, battery storage will therefore primarily improve grid stability in Germany – at least to the extent that these storage systems are tailored to grid needs and not to the optimization of solar power consumption in households. Younicos is thus focusing on the market for ancillary grid services (frequency response), not arbitrage.

The third chart below is quite complex, and we could spend all day on it alone, but let’s focus on the blue line at the bottom. It represents the frequency. When it rises above 50 hertz, batteries begin storing power (purple area above the baseline). “The battery unit takes the greater frequency as a signal to start storing power,” Hiersemenzel explains. 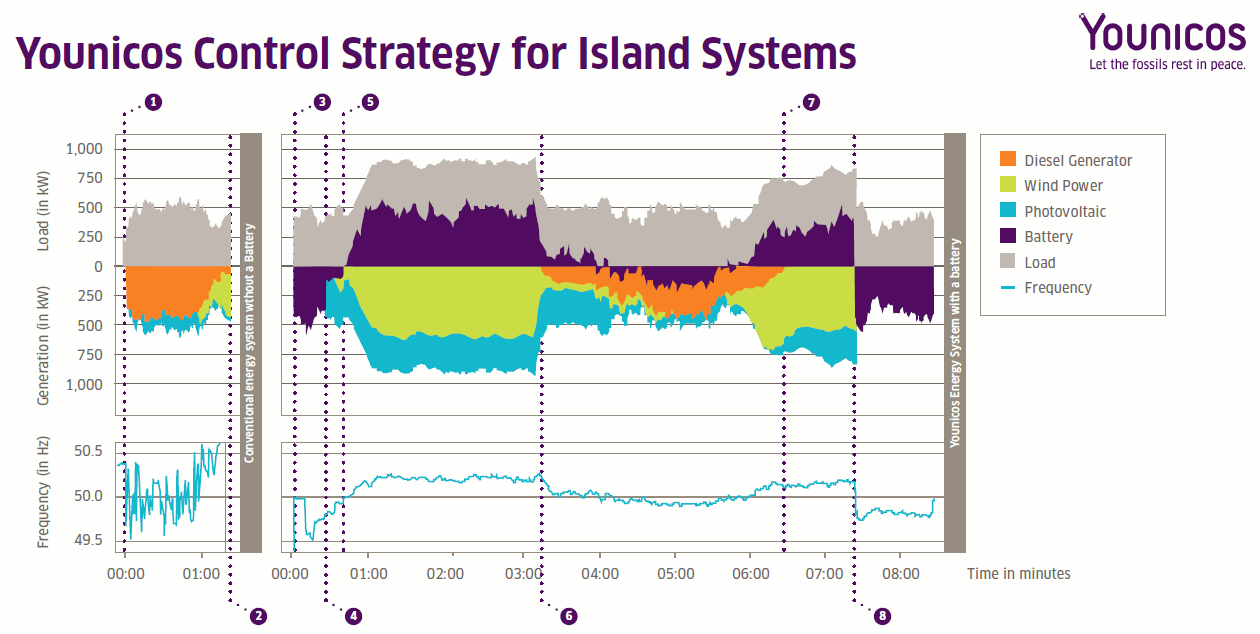 The solution could hardly be simpler. The grid itself signals what it needs. When the frequency increases, more power is being pushed in than taken out, so additional power needs to be stored. When the frequency drops, the grid needs power, so the batteries push power back in. The idea of using hertz as a signal for demand management is not new; in my (now outdated) book from 2005, I propose it as a way of getting around concerns about complex control signals and positive feedback loops (all systems reacting at once, thereby overshooting the target and producing the opposite signal – a dangerous cycle when repeated and amplified).

Small battery storage systems in households and businesses could react in the same way as Younicos’ grid-attached storage to stabilize the grid. Indeed, Germany’s SMA – the global leader in PV inverters – has already joined forces with German green power provider Lichtblick to produce a swarm of small battery systems (Tesla is a partner, as is Germany’s Varta Storage – report in German). The main challenge is policy; German law currently only incentivizes the optimization of direct power consumption, meaning that your household solar power production is tailored to your own consumption – not to what the grid needs.

The result could be bad for the grid at times. Let’s assume you work in an office during the day, when your roof array at home produces most of its power. That electricity is then stored in your batteries. When you come home at night, you consume electricity from the batteries. But what if there is a lot of wind blowing in the evening, and the grid needs to dump some power off into storage? Your system will not react to the grid’s needs in that case – at least not under current German incentives.

Small, distributed battery storage units could also react directly to hertz signals as well. Rural farming communities in Germany often have quite large arrays covering the giant roofs on barns, but power consumption can be low. The frequency on nearby low-voltage lines probably also fluctuates dangerously as a result, but consumption levels are so low that these lines are not closely monitored. Battery packs that react to hertz levels would greatly improve power quality in these areas. Too bad there is currently no incentive at all for such services.