Yet again, an expert – this time, a German – says Germany’s energy transition cannot succeed. He has a surprising insight for Energiewende proponents: the sun doesn’t always shine and the wind doesn’t always blow. How could we have missed that? Craig Morris takes a look.

The central argument is that the month of December up to the date of the original publication (20 December) shows that Germany’s energy transition is doomed to fail. Here is the chart that got Mr. Flassbeck going: 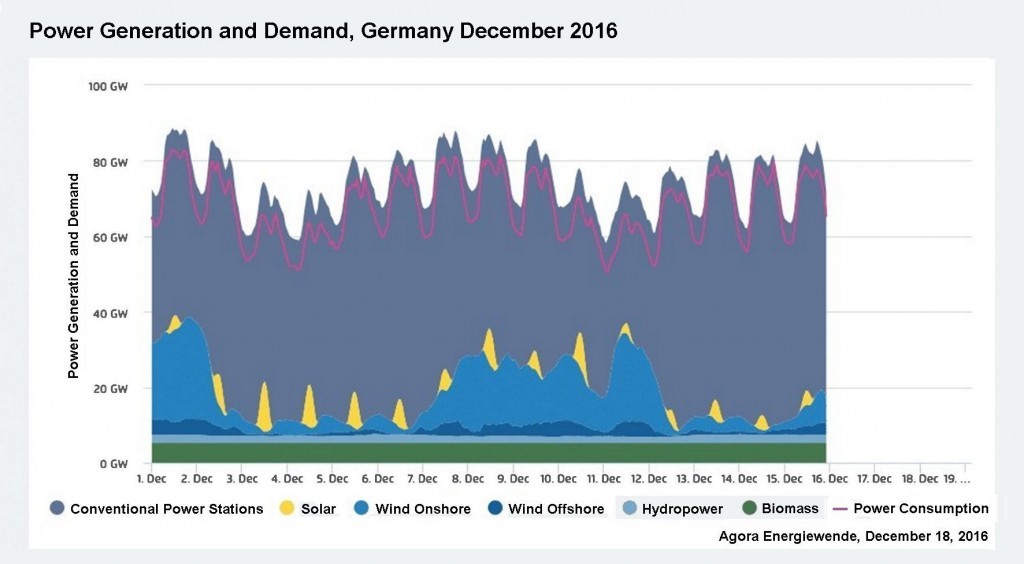 The low levels – nothing usual, by the way: here’s me writing about exactly the same thing in December 2014 – led Flassbeck to conclude the following:

“This winter could go down in history as the event that proved the German energy transition to be unsubstantiated and incapable of becoming a success story. Electricity from wind and solar generation has been catastrophically low for several weeks.”

What Flassbeck, who says he is a “lay person,” has just discovered for himself is well known in the German debate as the Dunkelflaute: the “dark doldrums,” or a time of very low solar & wind power production. I wrote about it here last year, mainly to explain my surprise at how close even the worst periods are to the original target (!) of 20 percent renewable power by 2020 (since raised to 35 percent). I have also published load duration curves going back at least to 2012; these charts show how frequent periods of, say, low wind and/or solar power production are.

It is thus revealing, but not surprising, to read Flassbeck’s next statement:

“We have attempted unsuccessfully to find Energiewende advocates willing to explain that inconsistency. Their silence is not easy to fathom.”

His statement is not surprising because Energiewende critics often accuse its proponents of having overlooked things already studied in depth. Here, it’s as though Flassbeck thought the best German minds didn’t know that it’s dark half the time. (The irony of Energiewende critics using charts made by Energiewende experts to show what those experts have allegedly not addressed is often lost on these critics.)

Assuming Flassbeck is using the royal “we” in the quote above, he obviously didn’t look hard. This website is not exactly unknown to those interested in the Energiewende (and I have also published at Energy Post). Likewise, the Wikipedia entry (in German) for Dunkelflaute (yes, there is one) specifically references texts from Agora Energiewende, the source of the chart Flassbeck uses. At Energy-Charts.de, Fraunhofer ISE has highlighted times of the lowest annual solar & wind power production going all the way back to 2011. The chart below from 2011, for instance, emphasizes a long-forgotten concern about a possible power outage that June. 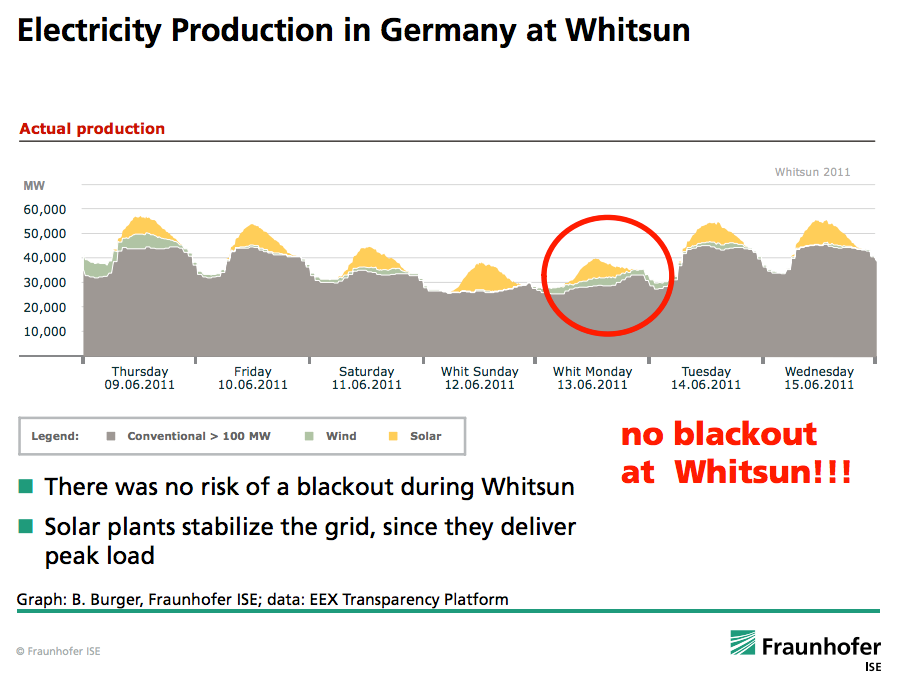 Not only have German experts coined a term and spoken about the danger of “dark doldrums” for years, they have even produced studies about what to do about them. Last year, I created two videos with the head of Fraunhofer IWES, the institute behind the Combined Power Plant study, which visualized the reliability of German power supply with 100% renewables (a goal, it should be noted, more ambitious than the German government’s actual target of 80% renewable power by 2050).

The short answer to the obstacle of the dark doldrums begins when we extend the chart Flassbeck uses to cover all of December. Days of high wind & solar are never far from days of low wind & solar. 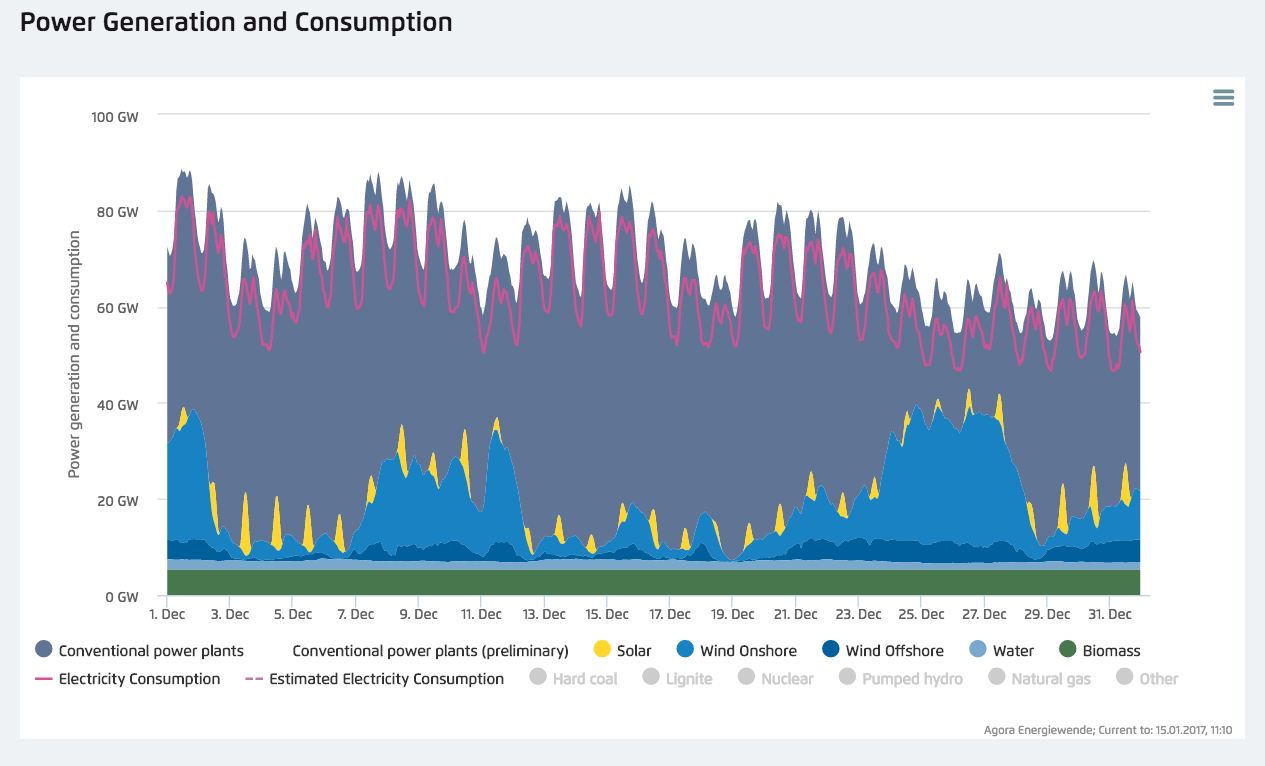 On the day Flassbeck originally published, wind power was just picking up again. It hit near record levels for five days in a row. As Fraunhofer’s chart below for the same month shows, conventional power was pushed below 10 GW as a share of domestic demand, with exports once again “rescuing” these plants. 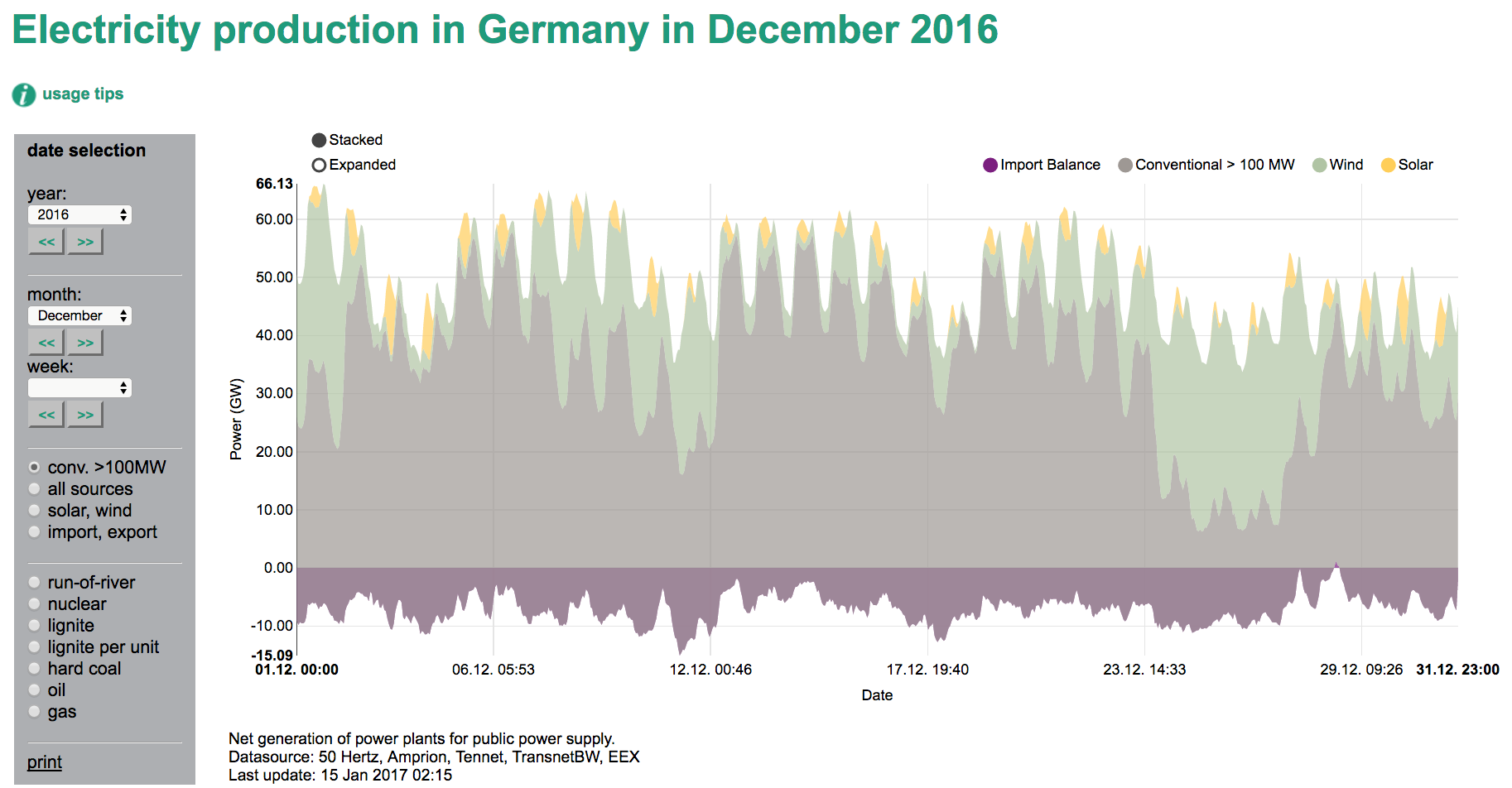 Indeed, Germany posted a new record level of wind power production on January 3 of around 36 GW at 9 pm, as the chart below for the first half of January shows. 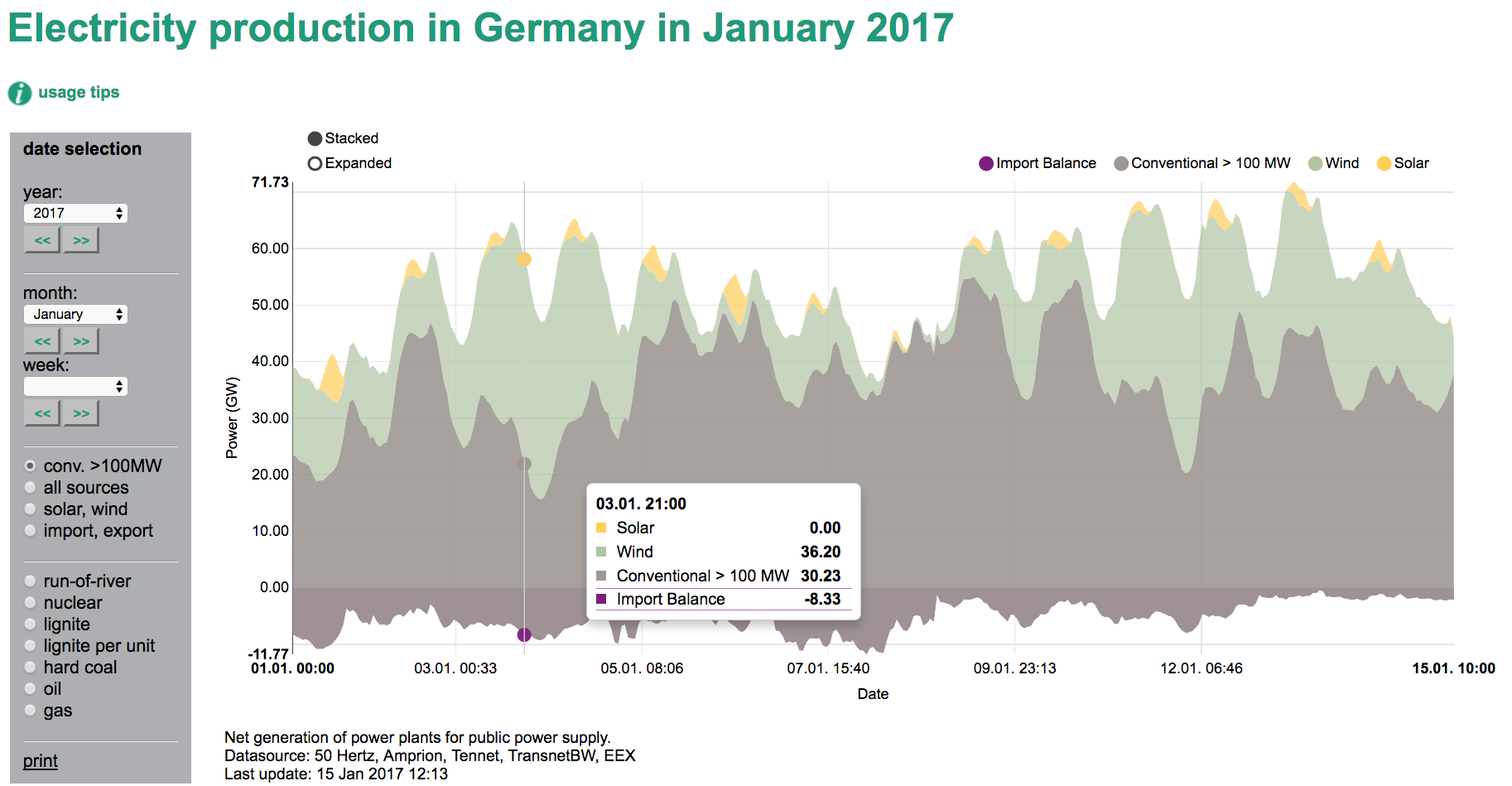 The solution to all of this is “flexibility options”: first, all power plants that can ramp; second, demand that can react; and third, storage – in that order. Ho hum.

We are just entering the second stage, requiring more demand shifting. Right now, dispatchable power plants ramp to accommodate spikey wind and solar. As boring as the issue Flassbeck addresses currently is, it will become interesting – and the Dunkelflaute is the central technical challenge of the Energiewende in the power sector. The scariest chart I have seen shows the residual load for 2050 with 100% renewables (below). 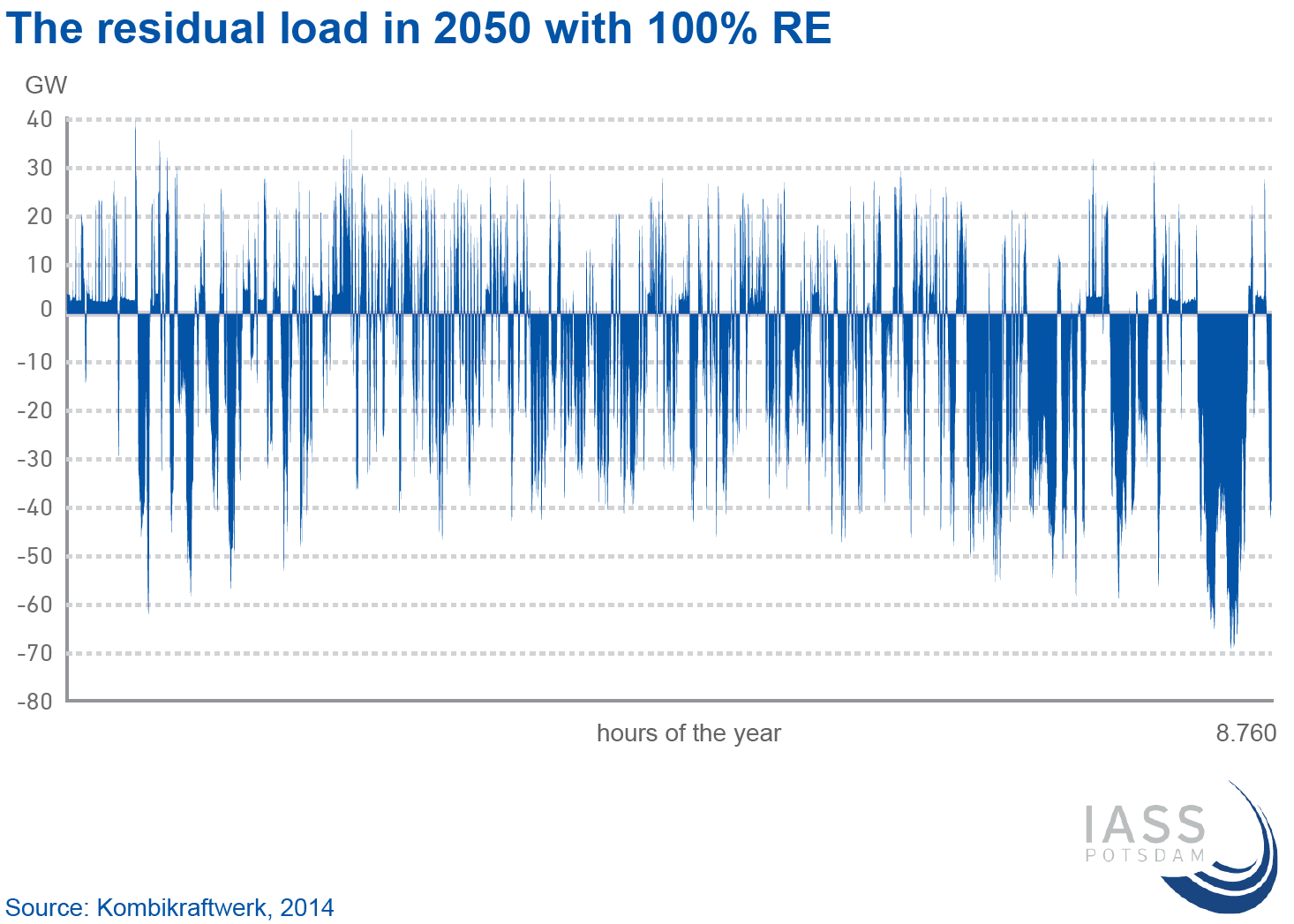 Does that chart not prove that Flassbeck is right and the Energiewende is doomed to fail? He certainly puts his finger on the main challenge, yes. (But don’t forget charging electric vehicles and electric heat – and the 80% target, not 100%!). The problem with his analysis is that he acts as though there are no solutions – indeed, as though no one had even looked for any.