“Texas and California have too much renewable energy,” writes Technology Review this month. “California has too much solar power,” Vox.com chimes in. Nonsense, says Craig Morris, a political arrangement is being passed off as a technical issue. Stop protecting nuclear and coal; get rid of baseload.

Is there too much wind and solar power in California? (Photo by Tony Webster, modified, CC BY 3.0)

In Germany, renewable power now regularly cuts into medium-load conventional plants and sometimes even offsets baseload capacity. The result can be negative power prices. Easter weekend is a case in point.

Here, we see that peak power demand (around 60 GW on from Monday to Thursday) dipped to 40 GW from Good Friday to Easter Sunday. When wind and solar power production picked up on the weekend, conventional generators were pushed down to 10 GW in terms of demand; around 10 GW of exports (the purple area below the baseline) rescued these plants, whose actual must-run level is closer to 20 GW. Power prices (the red and blue lines) plummeted and briefly went negative. During those hours, conventional plants were paying buyers to take power off their hands.

Why would they do that? It has to do with the must-run level. Think of your car. When you turn it on, the tachometer probably reads around 800 rpm. That’s your car’s must-run level. Hit the gas, and it goes up to 2,000-3,000. But if, for some reason, you wanted your engine to drop down to 600 rpm, you’d be out of luck; without revamps, it won’t work. Coal and nuclear plants have a relatively high must-run level. 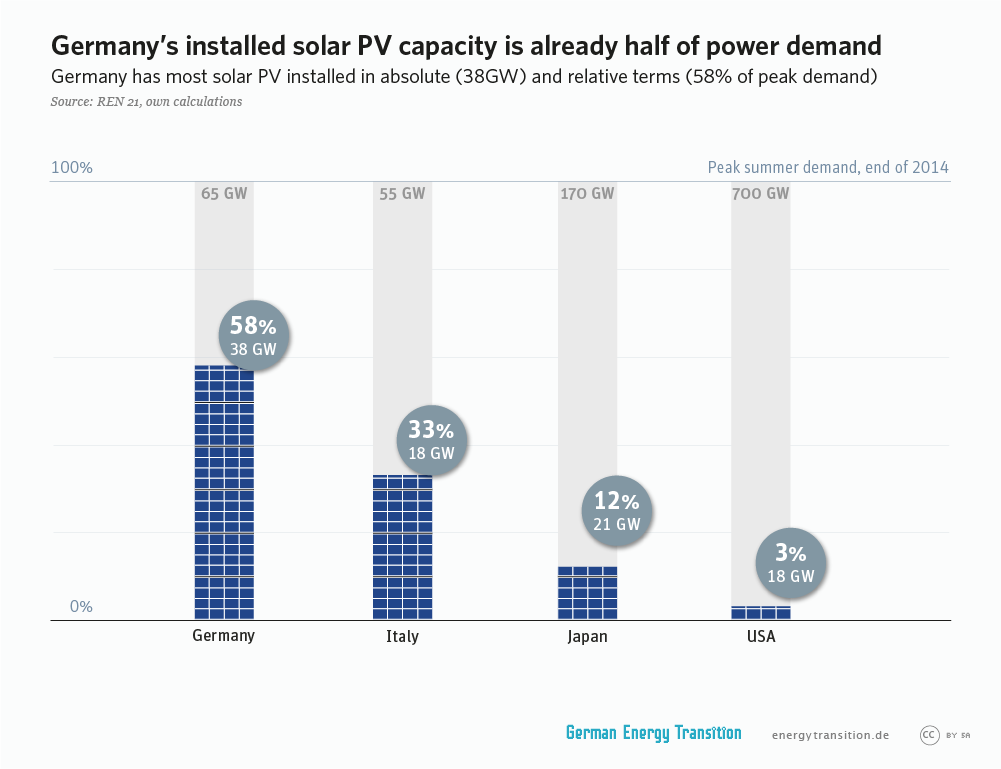 The US grid could accomodate 19 times more photovoltaics before it reaches the German level.

Look at the California data, and we see that the complaints cannot be technical in nature. “On March 27… some solar farms had to shut down because there was more power on the grid than Californians were using,” writes KQED Science. But compare the German chart above to the California chart below, and you may notice some differences. 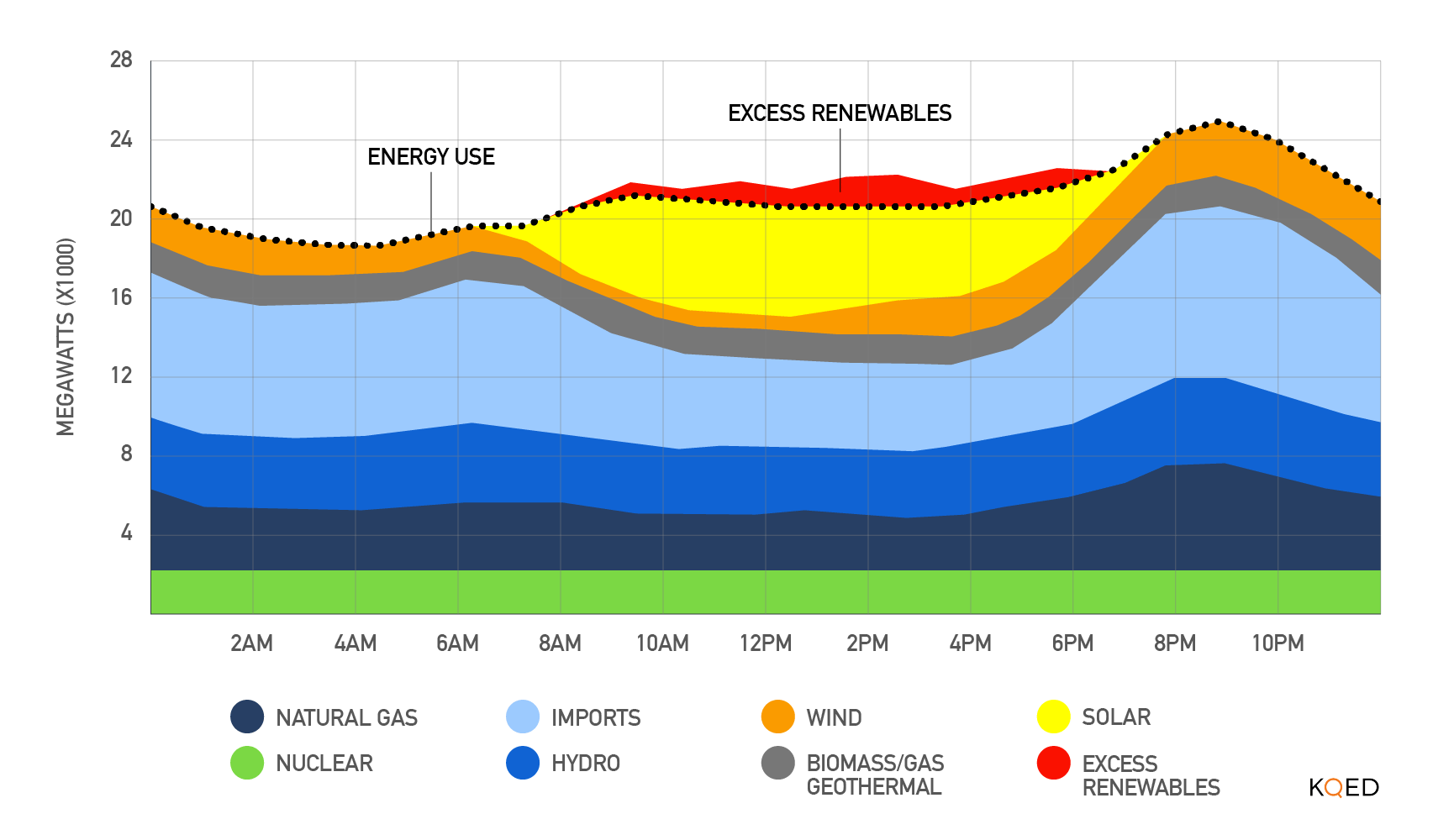 Let’s take a look at the “residual load” (demand minus renewables) in the chart from the bottom:

At Vox, David Roberts concludes that California “needs another grid to share with.” The chart shows the opposite. If California had more wind and solar, imports could drop, so less (!) interstate grid lines would be needed. California mainly imports coal power, and imports made up 27 percent of the state’s power supply in 2015 (PDF). More green power in California means lower demand for coal power.

Clearly, California is curtailing renewable power before its conventional fleet has reached the must-run level, a technical limit. I suspect renewable power is being curtailed when the market value drops below 1.0, meaning that conventional power becomes cheaper on the spot market than renewables (the expenses are called “system costs.”). Shedding green electricity at a market value below 1.0 is a political decision, not a technical necessity. Germany has made a political decision to go 80 percent renewable for power by 2050, and the Germans understand that this transition will entail such system costs and ruin the profitability of coal and nuclear – in fact, that’s the goal. 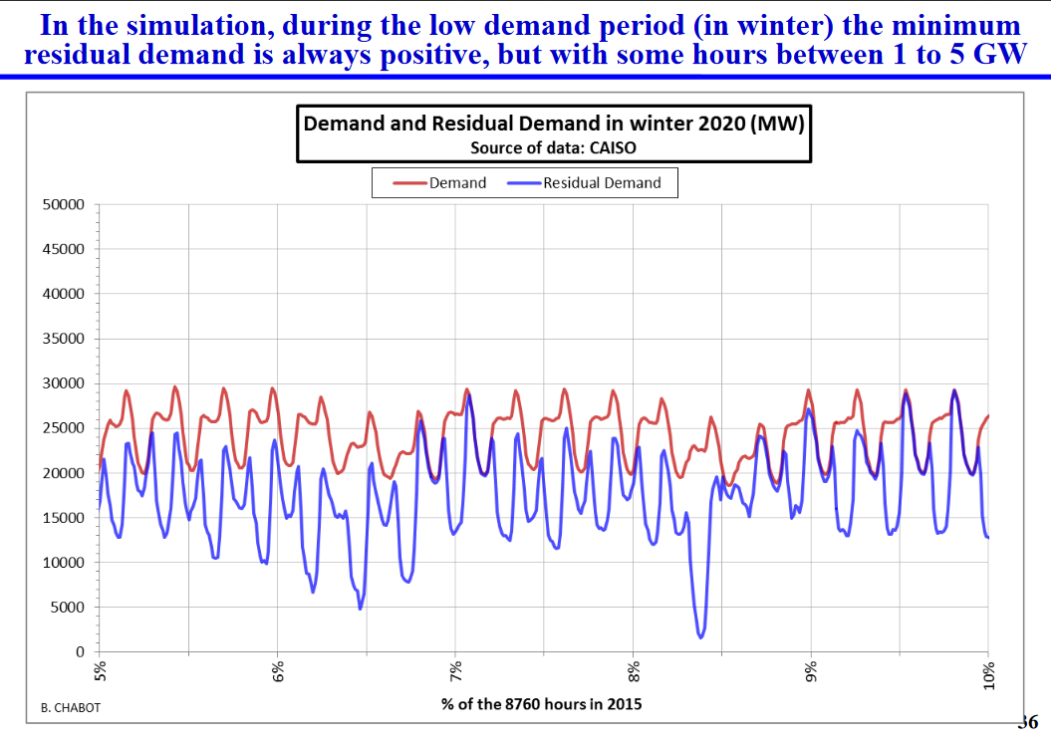 Bernard Chabot’s calculation of demand and the residual load (demand minus renewables) for 2020 in California. His conclusion: “There is ample room for much more wind and solar production in California without risks of RE oversupply or urgent needs for RE curtailments, storage, or exports.” Note that a study by Eric Martinot from November listed numerous options in addition to grid expansion. (Source) 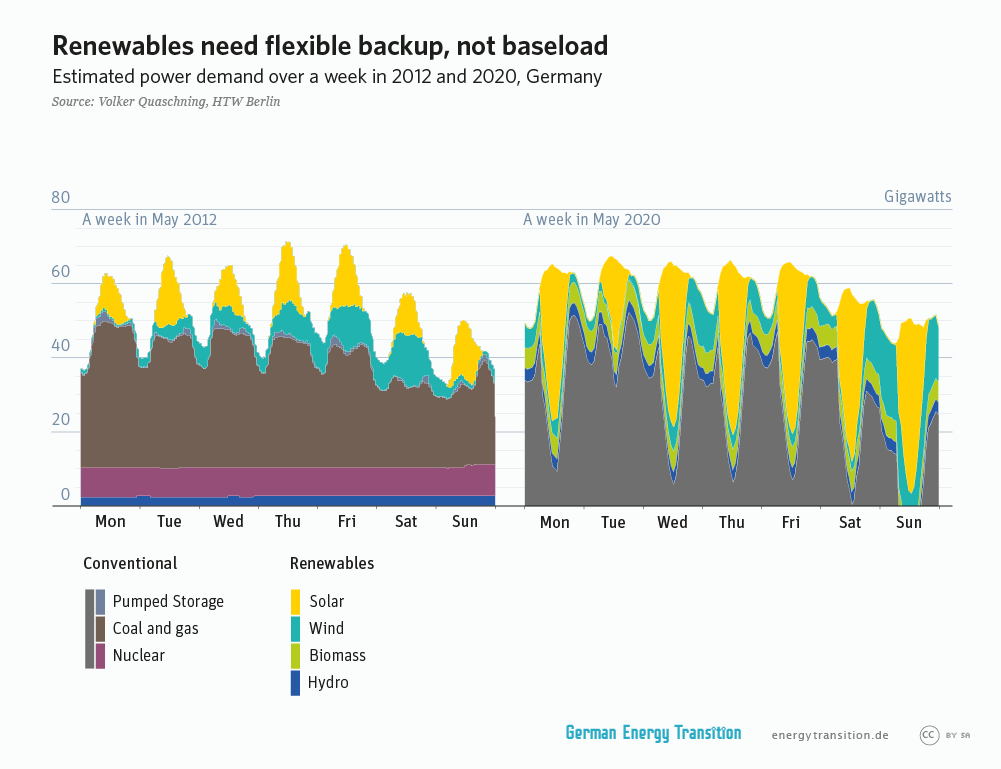 Originally produced in 2010 by Prof. Volker Quaschning, this chart shows that the Germans have long understood that the residual capacity for wind and solar will need to be as flexible as possible.

No one doubts the general analysis in these articles from the US:

But the specifics from California show that Americans overlook the need to shut down baseload. Roberts mentions how Denmark uses the grid to manage excess wind power without mentioning that France needs exports to keep its baseload nuclear fleet from ramping down at low levels of demand. IRENA pointed out in 2014 (PDF) that the early retirement of baseload plants precedes storage. Get rid of baseload, and you reduce must-run capacity, making space for wind and solar.

So does California have too much solar or too much baseload? The answer is political, not technical. If you want solar and wind, call for an end to baseload.