Jobs, fighting climate change, energy security – there are a number of good reasons to support solar power. But as Alexander Franke explains in his recent essay published by the Heinrich Boell Foundation, arguments by solar activists differ widely in Germany and the US. He argues that solar supporters should continue to focus their ideas and arguments on their target audience, even if that entails talking less about environmental issues.

Over the last three years, there has been a surprising amount of conservative support for rooftop solar legislation in many states in the US. TUSK, a group which is led by Barry Goldwater Jr., advocated fair net metering rules in Arizona and has now spread to other states. There is also a Green Tea Coalition, which originated in Georgia and unifies environmentalists and Tea Party supporters in their support of solar power. What has changed that allowed this new conservative interest in solar power? Apart from the fact that renewables are getting cheaper by the day, what is striking about these organizations is that they usually do not use climate change as an argument to support their position on rooftop PV, but instead focus on other arguments, such as economic choice and low electricity prices. It is a fitting example of how arguments for technology like rooftop solar can be reframed and how important this framing is in order to win over new constituents.

This becomes particularly clear if you compare the differences between Germany and the US in how arguments for solar are framed:

This is where TUSK and other organizations have helped to change the solar discourse by focusing on the before-mentioned economic arguments that do resonate with conservatives and Tea Party, including economic independence and cost reductions. In Germany, economic arguments have been prevalent at least since the early 2000s, when job creation and particularly global competitiveness in a future industry moved to the forefront for PV supporters.

What is more specific to Germany is the focus on community, a focus that goes back to the longstanding public debate on nuclear power (in which bottom-up solar power was seen as a benefit for rural communities). PV and renewables are seen as a tool to democratize power generation and reinvigorate rural communities by creating local jobs with local economic and social benefits. This line of argument has been particularly important in winning over conservative farmers to the benefits of renewables, similar to how Tea Party supporters have been drawing new connections between PV and the core beliefs of their peers today. Finally, while fracking has temporarily alleviated some of the US’ most serious concerns about energy security, talking about domestic energy and local jobs might be a way to bring Americans together on both sides of the aisle and has played a somewhat more important role in Germany since the recent developments on Ukraine’s eastern border towards Russia. 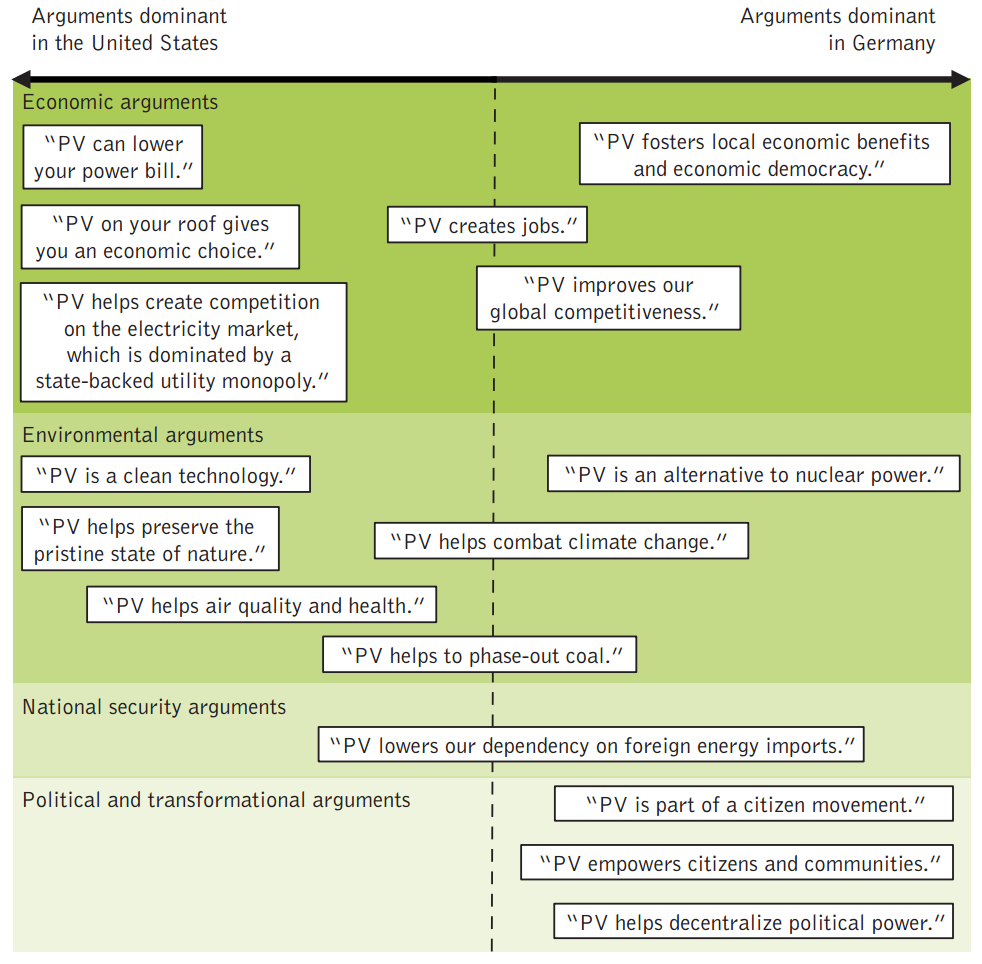 Overview of some of the most common arguments put forth on solar in the US and Germany.

At the core of today’s fight for solar power is not only a battle for influence and legislation, but also a struggle of ideologies. It is therefore no surprise that discussions around renewables are shaped by the preexisting cultural and political narratives. Solar advocates would be well advised to focus strategically on core beliefs of their constituents and find ways to link solar power to those beliefs. While this can mean talking about jobs and climate change with progressives, it might make sense to focus on framings of economic choice and competition with conservatives. Meanwhile, arguments of community power and local jobs have been popular with Germans and should also function well in rural parts of the US with its focus on small town values such as self-reliance and community development.

Alexander Franke (@al_f) is interested in energy transitions, particularly the political and cultural changes that are necessary for achieving a renewable energy future. Alexander holds an MA in Political Science from the Free University Berlin, where he graduated with a focus on socio-technical transitions and renewable energy support mechanisms.