In late May, strikes reduced nuclear power production in France. Yet even more plants were offline a few weeks earlier without any strikes at all. German and European renewable electricity may have been one reason why France switched off so many nuclear plants that weekend. Craig Morris takes a look.

The news has been a bit difficult to comprehend. For instance, Reuters reported that labor union strikes on May 26 would affect the country’s “19 plants”. To be more precise, the country has 58 reactors in 19 locations. The difference in these numbers is important if we want to understand what it means that nine reactors were switched off that day because of the strike. Less than a sixth of the reactors were thus affected, not nearly half. Still, nuclear “must be designed to sidestep labor-management antagonisms,” wrote Mark Hertsgaard back in 1983. Strikes are relevant for nuclear safety.

On the other hand, 33 of France’s 58 reactors were offline or running at reduced output that day. Yet, the situation on Thursday (May 26) was not as grave as the one on Sunday (May 15) though it drew much less attention. The strikes on May 25 “only” brought nuclear power production down below 40 GW (and briefly below 37 GW, as shown in the chart below). 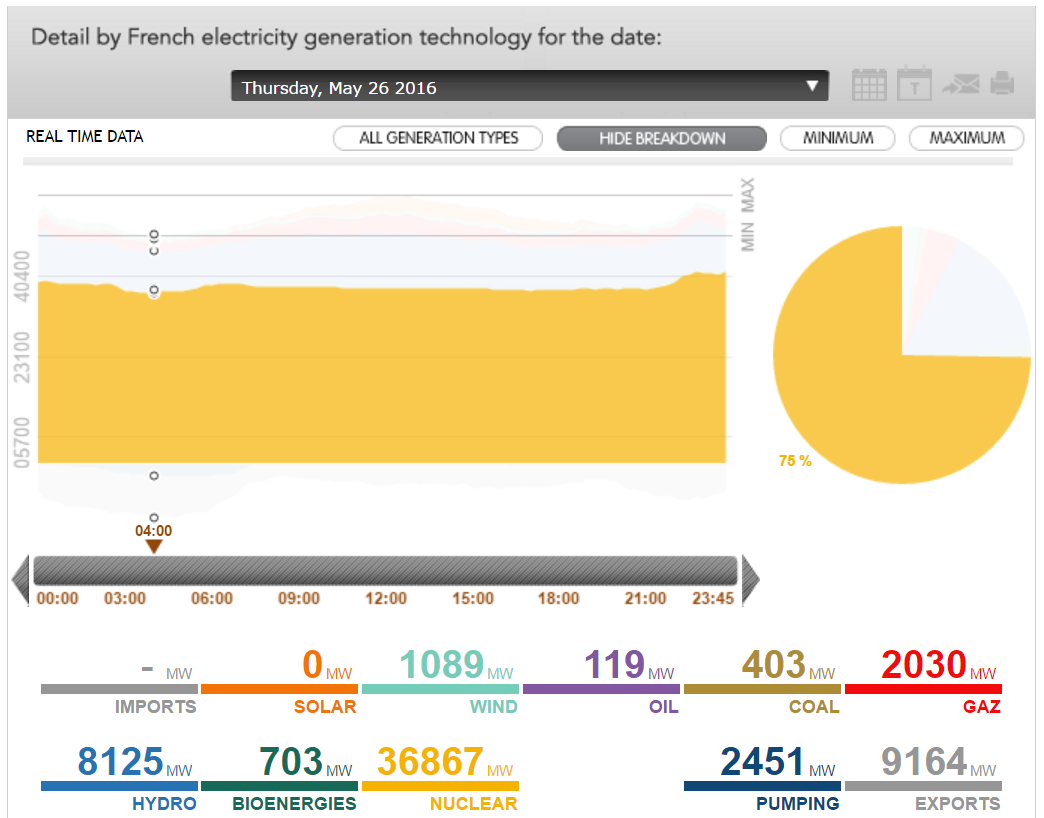 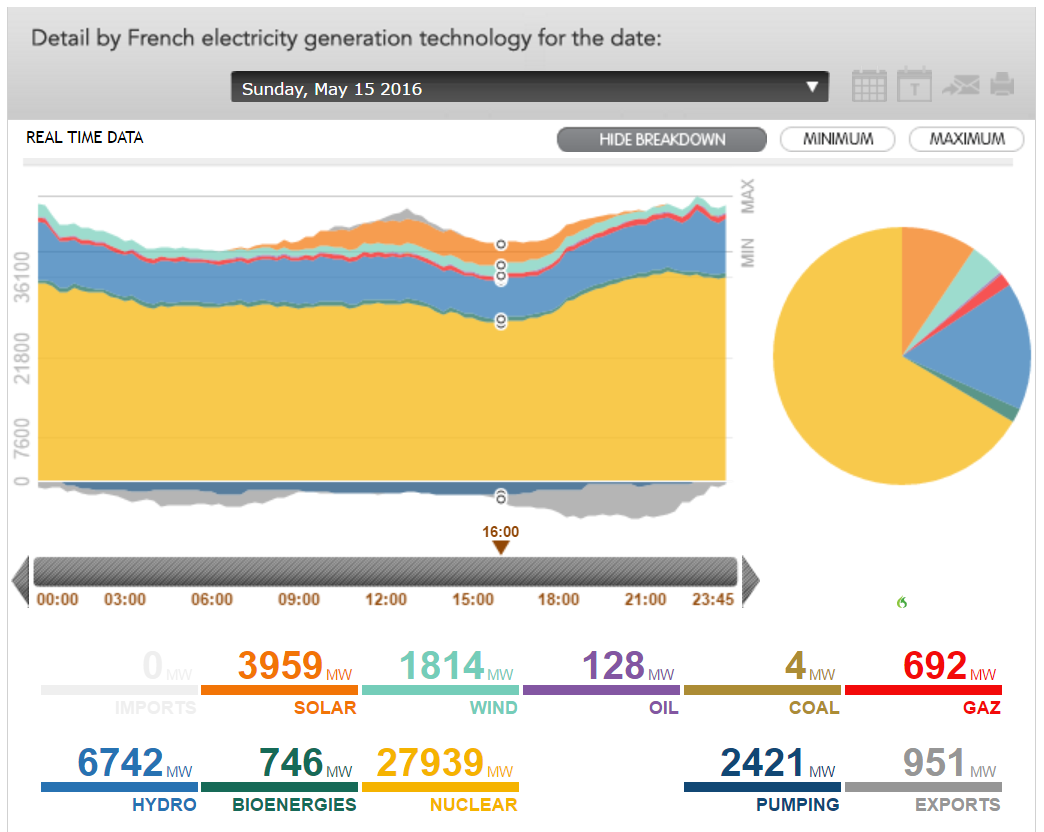 There is an interesting correlation between the probably record peak share of renewable electricity in Germany at 3 PM that same day. As the chart below shows, wind and solar power collectively came in at around 35 GW – to serve demand only around 10 GW higher. All other power plants (hydro, biomass, coal, natural gas, and nuclear) were pushed down to 17 GW, more than half of which was for export.

That day, 34 of France’s 58 nuclear reactors were off-line or running at throttled output, a number that may be an historic record (if anyone can help us find that out, please use the comment box below). Eight of those 34 events were unplanned.

Note that all eight of those unplanned events in France began no later than May 14, the day before the new record in the share of renewable electricity in Germany. But as the chart above shows, renewables were already putting intense pressure on Germany’s power fleet that Saturday as well.

France is surrounded by countries with a lot of solar and wind, with the exception of Switzerland. It thus seems that renewable power peaks in western Europe might be squeezing out French nuclear power. If so, we will see how flexible the nuclear fleet can be. My bet is that France cannot afford to build up solar and wind any further unless it starts closing nuclear reactors. If neighboring countries continue to develop these two energy sources, the result could be more failures in France’s aging nuclear fleet.

Some of the other shutdowns deserve closer attention. On March 31, the nuclear plant Paluel 2 “just barely escaped catastrophe,” as Le Parisien put it (in French). That day, a 465-ton steam generator suspended above the reactor’s concrete pool (the facility was not in operation at the time) fell some 22 meters, causing an impact “comparable to an earthquake,” according to the French paper. It is unclear whether the reactor will ever go into operation again.

If it doesn’t, then the country’s oldest reactor, Fessenheim, technically might not need to be switched off. The current deal is that it will be shut down so that the new one in Flamanville can be turned on. Flamanville may never be completed, however, and Fessenheim is not doing so well itself. Block 1 was switched off in May when the potential for a leak was discovered. Overall, the reactor failed four times in May alone and was also switched off completely once for two days of scheduled maintenance.

France has put so many eggs in the nuclear basket that it cannot transition away from the technology. And because too many people concerned about carbon emissions fail to understand how incompatible nuclear is with wind & solar, France just may try to integrate the two. The result could be an accident that will change public opinion in the country forever, but it would be a high price to pay for the insight that the future is with wind & solar – and that nuclear is incompatible with them.