Stanford’s Mark Jacobson and Mark Delucchi made headlines at the end of November for their pronouncement that 100 percent renewable energy is possible in most countries. The publication came out in time for the COP 21 conference in Paris. The findings do not overlap with what researchers in Germany publish. Craig Morris explains.

Back in 2009, Jacobson and Delucchi began publishing reports on 100 percent renewable energy worldwide (PDF and PDF). In November, the researchers published their latest update (full PDF). A presentation is also available at the 100.org website, which openly states it is a “campaign.”

The main point that Jacobson are making at the COP 21, according to an article in Scientific American, is that “international agreements to reduce carbon dioxide emissions… would not even be needed if countries switched wholesale to renewable energy.” The message is excellent. But what if their specific proposal for 100 percent renewable energy looks much different from others?

Below, we see their breakdown of energy sources for 100 percent renewable energy in Germany. 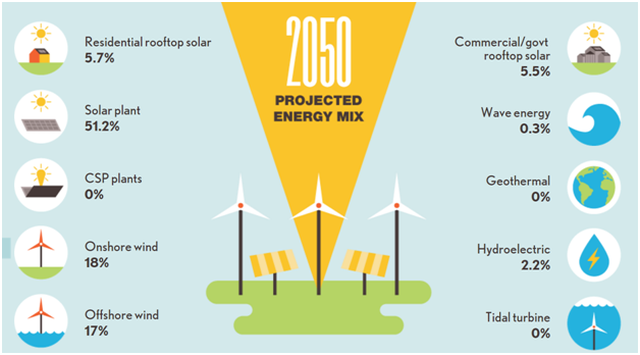 The omission of biomass is not an oversight. Rather, the researchers investigate WWS: wind, waves, and solar. Without biomass, Germany would apparently get nearly 2/3 (62.4 percent) of its energy from solar. In comparison, the Fraunhofer IWES study from 2014 on 100 percent renewable electricity only had around 20 percent solar power, with a third coming from onshore wind and a fifth from offshore. These numbers are hard to reconcile and probably reflect the US researchers’ personal predilection for solar.

Fraunhofer ISE’s also recently looked into 85 percent renewable energy. It produced numbers far from what the Stanford researchers reached: nearly half onshore wind, around a sixth offshore, and roughly a third solar. The two Fraunhofer institutes thus have fairly similar scenarios, neither of which is anywhere close to the Stanford findings. Note that both German studies contain a small share of biomass, which makes up a tenth of power supply in the IWES study. Because bioenergy is used more outside the power sector (as fuel for transportation and heat), it is slightly higher in the ISE study at around a quarter of total energy. A certain amount of sustainable biomass simply is available, especially from waste.

In terms of cost, the Stanford researchers put the annual energy, healthcare, and climate cost savings in Germany per person at a whopping $11,141. And again, these figures are not in line with the ISE estimate (the IWES study did not investigate cost), which comes out to be around 7,800 euros per capita in 2050 – for “only” 85 percent renewable energy. However, ISE found that installed capacity would roughly double from 80 to 95 percent renewables. The cost of 100 percent was not investigated, but one can assume it would be roughly twice as expensive as 85 percent, probably producing higher costs, not lower.

The weak points in the 100 percent campaign are aviation, shipping, and steel production. Back in 2010, Jacobson and Delucchi assumed that ships and planes would run on hydrogen. The new paper still says the same: “hydrogen… will be used primarily for long-distance trucking, heavy ships, and aircraft, can be produced by WWS electricity during any time of a year.” This option is possible but also costly and relatively inefficient; there is, however, no other clear alternative. Neither paper investigates steel production with renewables, though the former explicitly states that the use of “steel will likely increase.” Carbon from biomass is the only realistic replacement for coke, but the US researchers seem to oppose bioenergy: “No natural gas, biofuels, nuclear power, or stationary batteries are needed.” Furthermore, a main finding in the IWES study was that stationary batteries will be used to stabilize the grid.

It is a bit disconcerting that the Stanford researchers (or should I say “campaigners”?) come to such different findings than the German experts. One wonders how far they stray from local opinions in the other countries.

As campaigners, they should carry the “100 percent renewable” banner. (It will be hard to get people to march behind “85 percent renewable.”) But as top scientific researchers, they risk their reputations by putting campaigning ahead of research. We need scientists to stay above the fray and refrain from hyperbole.

In Germany, the question of whether a 100 percent is the right target currently divides proponents of renewables. The Green Party recently questioned whether it should stick to that target by 2030, which the renewable energy sector itself increasingly feels is unrealistic (report in German).