As Russia’s brutal invasion of Ukraine metastasizes into a global humanitarian crisis, fossil fuel interests are wasting no time in trying to wrench as much glorious shareholder value as possible out of the growing calamity. Lead blogger and podcaster, Michael Buchsbaum argues there’s little coincidence that the United States, the world’s largest oil and fossil gas producer, is using fears of global energy insecurity to gain more market’s for their liquid natural gas (LNG) sector. 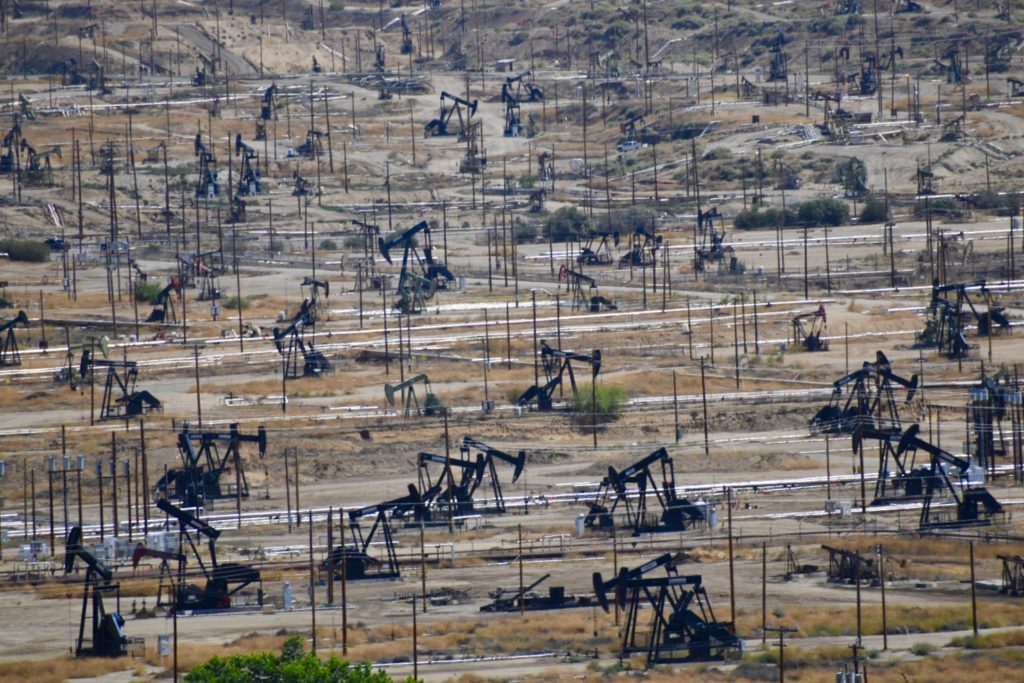 When playing Texas-style disaster capitalism, you never let a terrible situation for consumers or the planet go to waste.

In her seminal book, The Shock Doctrine, Naomi Klein argues that when disasters strike — be they war, conflict, natural or human-made — many of the world’s most profitable corporations leap to the task of using the crisis situation as reason to ram through their wish lists – often lobbying themselves into any relief efforts or “solutions” strategies.

Klein, a professor of climate justice at the University of British Columbia, coined the term “disaster capitalism” in order to illustrate how a variety of industries have perfected a strategy, often facilitated by willing governments, to not only increase profits during the crisis events of the past century, but to find ways to pervert the narratives around these calamities into more shareholder opportunities.

In the months ahead of Russia’s invasion of Ukraine, Gazprom and several other global oil and gas majors were engineering ways to ensure supply scarcity, real or imagined, which they knew would drive spiking prices ever higher.

Then as Russian tanks began sweeping into Ukrainian cities, the Biden administration took a lead role in advocating for an international sanctioning regime against Russia, with bans on imported coal, oil and fossil gas at its center.

In a flurry of international diplomacy, the US, the United Kingdom, most EU member states and several other allied nations hurried to forge a new “coalition of the willing” united in rejection of Russian fossil fuels and aimed at starving Putin’s fossil fuel-funded war machine.

Full of pomp and circumstance, though relatively slow to come into force, this banning and sanctioning strategy has also served to turbo-charge an already highly manipulated oil and gas market, driving fuel and energy prices – and inflation – to dizzying heights.

While framed to support Ukraine, the threats of actual bans and import stoppages have actually helped pad the quarterly profits of nearly all global O&G majors while also perversely enriching Gazprom’s stockholders and the Kremlin’s already foul coffers.

Indeed high prices ahead of Russia’s invasion already proved a bonanza for the 28 largest producers worldwide. According to a tally by the Guardian, they made close to $100bn in combined profits in just the first three months of 2022 – i.e. pre-invasion.

As President Putin postured and threatened his way through the first quarter, Shell made $9.1bn in profit, almost three times more than last year. CEO Ben Van Beurden, admitted that the war, “a macro” situation, was driving earnings which “our shareholders will benefit from”.

BP investors also celebrated their highest first-quarter profits in a decade, making a sweet $6.2bn. Murray Auchincloss, BP’s chief financial officer, said in February: “Certainly, it’s possible that we’re getting more cash than we know what to do with.”

With rockets slamming into Kiev and across Ukraine, in early March leading U.S. oil and gas producer, ExxonMobil dramatically announced that they were pulling out of their Russian partnerships, writing down over $4 billion in assets in the process.

Just the same, high commodities prices enabled the Texas-based behemoth to still rake in an eye-popping $8.8bn in quarterly profits, a nearly threefold increase year over year. Across the state in Houston, Chevron announced quarterly earnings of over $6.5bn, a steep rise over the paltry $1.4 billion they made the year before.

To quell fears of energy supply disruptions as nations adopted sanctions and bans on Russian hydrocarbons, the supposedly climate-focused Biden administration swiftly issued orders to expand by over 50% the amount of liquified natural gas (LNG) the US is capable of exporting across the Atlantic.

Though no doubt corporations are using reactions to the war in Ukraine as an opportunity to grow market shares at Russia’s expense, in actuality fossil fuel exports from the US have grown dramatically over the last decade, becoming a major source of revenue since Presidents Obama and Trump lifted bans on shipping oil and gas outside North America.

Between 2019 and 2021, as industry profits fell on low prices and slumping domestic demand, the US tripled its worldwide LNG exports, now up 100-fold since 2015.

As American oil tankers set sail with cargoes full of “freedom molecules,” few journalists working in US corporate media reminded Biden about his recent founding of a global methane coalition dedicated to reducing emissions of this extremely potent greenhouse gas, the main component of LNG.

New measurements taken by the US National Oceanic and Atmospheric Administration show that global concentrations of methane have increased to 1895.7 parts per billion, the second year in a row it’s risen at a record rate. It’s now more than double pre-industrial levels of 720 parts per billion.

Leakage of unburned methane into the atmosphere from the internal US oil and gas supply chain is a major source of a very potent greenhouse gas, about 84 times more potent than carbon dioxide.

“My research strongly points toward fossil fuels as being the largest cause of the increase since 2008, with increase emissions from shale gas production from fracking in the US being a major part of that,” said esteemed Cornell University scientist and methane expert, Robert Howarth.

Moreover, data shows that the climate impact from industry’s supply chain worsens as it extends to Europe. Research-based on a recent study by the US Department of Energy’s National Energy Technology Laboratory shows that at least 230 million additional kilograms of methane leaked from the 28 billion cubic meters of LNG exported from America to Europe last year, far higher than previous estimates from the Environmental Protection Agency (EPA).

As Howarth reminded in an op-ed penned with colleague Dr Anthony Ingraffea, leakage from pipelines through to export terminals, as well as the liquefying process, off-gassing during sea transport in cryogenic tankers and re-gasification and additional pipelining in Europe plus the carbon dioxide emissions associated with all of these additional energy-hogging processes will only increase LNG’s already nightmarish carbon footprint.

We have other options

With solar and wind power now the cheapest sources of power on the planet, the safest strategy to both drain Russia’s war chest as well as to address the overall climate crisis is to massively accelerate the production of renewable energies not just to replace Russian coal, oil and gas, but the production of all life threatening petro-carbons.

The collective response to the triple threat of war, financial ruin and climate chaos cannot be to produce and ship more fossil fuels.