Climate change is the biggest global emergency we are facing, and using litigation to hold corporate polluters accountable for misleading consumers is one among a variety of avenues to combat this crisis.  A recent report by the European Commission showed that 42% of online market websites contain false, deceptive or exaggerated environmental claims and could qualify as unfair commercial practice under European Union (EU) regulations. These are “greenwashing” claims, and the litigation brought on that basis highlights the gap that exists between environmental claims and actual action. In this blog post, Akriti Bhargava, Karla Martínez Toral and Aradhna Tandon explore what constitutes greenwashing practices, how these have been challenged in European courts and some implications for litigation of the EU Taxonomy. 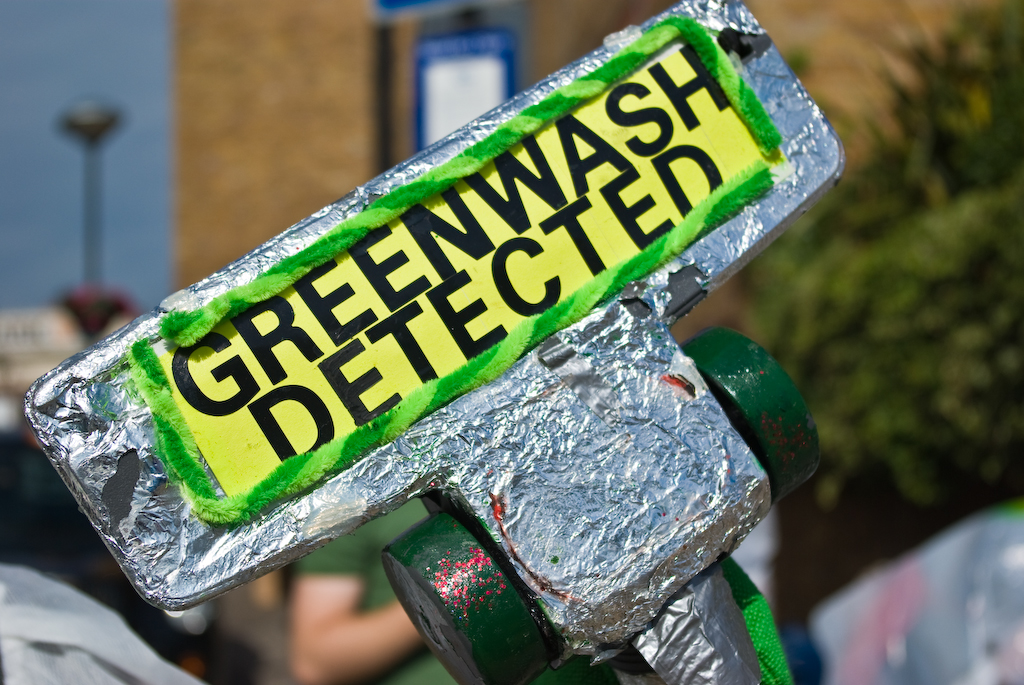 The EU Taxonomy was implemented to reduce greenwashing. (Photo by fotdmike, CC-BY-NC-ND 2.0)

Greenwashing is generally defined as the unsubstantiated or misleading claims regarding an actor’s environmental performance. It can also describe the selective disclosure of positive environmental or social impacts of a company’s business practices, without complete disclosure of negative impacts. Greenwashing specifically related to climate change —  also referred to as “climate-washing” — can include employing false claims, hiding important information that could help evaluate the meaning or context of a claim, and/or using vague or ambiguous terms, as outlined below.

In an effort to reduce greenwashing, the EU published the EU Taxonomy — a regulation that establishes a classification scheme for economic activities based on their environmental sustainability. This classification provides a common language and a clear definition for “environmentally sustainable economic activities” that aims to help companies, investors and policymakers make informed decisions.

The EU Taxonomy might not be perfect. For instance, the text has already been challenged for its unlawful labeling of bioenergy, bio-based plastics and chemicals used to make plastics as “sustainable”. Further disputes have risen around the EU Taxonomy’s inclusion of fossil gas and nuclear power, with claims from those opposing this inclusion arguing that it contradicts science and encourages greenwashing. Nevertheless, implementing the EU Taxonomy across Europe will likely reduce the risk of greenwashing. Arguably, an agreed taxonomy in sustainable finance would avoid inaccurate environmental claims of a product or performance. With the EU Taxonomy setting a clear classification on environmental sustainability, there is a potential for disclosure obligations (both for financial and non-financial entities) to counteract greenwashing practices.

Litigation focused on challenging climate-washing marketing or business practices is part of a wider movement using legal frameworks to combat climate change. One avenue of climate-washing litigation uses consumer protection frameworks, and this could be a useful lens through which to enforce a company’s climate commitments (for example, net-zero pledges). Typically the claims plaintiffs make are that such commitments misrepresent or violate national consumer protection or corporate laws. For example, the Australasian Centre for Corporate Responsibility filed suit against oil and gas company Santos for projecting net-zero emissions by 2040 on the basis of carbon capture technology that does not even exist yet.

Product liability litigation is a second avenue that can target climate-washing practices of companies. In the case of the fossil fuel industry, a common misleading approach used for fossil fuel products in the context of climate change claims is to focus on combustion or end-use emissions while ignoring substantial upstream emissions in product extraction, refining, processing or transport. In Europe, consumers have begun challenging the classification of natural or fossil gas as a ‘clean’ fuel to mislead consumers. The Italian Competition and Market Authority imposed a fine of 5 million euros against the fossil fuel company Eni for deceiving consumers by labeling biofuels ‘green’ diesel. In the UK, consumers brought a similar claim against Shell for a ‘carbon-neutral’ ad on its petrol pumps but regulators found the ad unlikely to mislead consumers, holding that Shell’s loyalty scheme contributes to its neutrality through carbon-offsetting, as opposed to misleading consumers into believing the scheme itself was a carbon-neutral fuel.

A third avenue of combating climate-washing focuses on using litigation to challenge the failure of companies to disclose the risks posed by climate change to their fossil fuel-based assets and investments. Complaints of misleading portrayals of fossil fuel companies’ investments in clean energy sources have been brought against companies in Europe and the USA. For example, in the UK the NGO ClientEarth filed a complaint against BP on the grounds that BP had misrepresented the scale of its low-carbon investments by omitting full lifecycle emissions for natural gas in calculating emission savings. This case is noteworthy because it shows that companies might be exposing themselves to liability under already existing regulations, even those deemed ‘soft law’ such as the OECD’s Guidelines for Multinational Enterprises. ClientEarth has also filed several other non-compliance complaints before financial regulators in the UK to require companies to provide detailed disclosure of their climate-related risks in compliance with security regulations, which would require companies to disclose any ‘material risks’ that may influence the decisions of their investors.

While targeted towards aiding the energy transition for countries pursuing their Net Zero targets, the EU’s Taxonomy Regulation is facing claims of greenwashing for including natural gas and nuclear power as sustainable investment under specific conditions. The EU is facing threats of legal action for climate-washing investments in natural gas and nuclear power by including them as ‘transitional economic activities’ under the EU Taxonomy Regulation. Organisations such as ClientEarth are considering filing litigation against the EU to combat greenwashing of gas and nuclear power as aiding the energy transition since these directly conflict with the EU’s commitments under the Paris Agreement to be Net Zero by 2050. Austria and Luxembourg are also considering filing lawsuits against the EU’s proposals. The development of the EU Taxonomy could, therefore, lead to an increase in lawsuits with more comprehensive grounds for litigation.

The above cases illustrate that a variety of laws and legal principles are already being used to bring companies and countries to account for their climate communications. Since climate-washing litigation uses both soft and hard laws, these types of litigation are likely to be diverse. Companies and governments, therefore, need to be cautious while making claims on actions taken to achieve net zero commitments. While such commitments are important and welcome, they need to be credible – and thus measurable, ambitious, include short and medium-term interventions and allocation of adequate resources to deliver them.