On April 4, 2022, the IPCC published he third part of the Sixth Assessment Report, Climate Change 2022: Mitigation of Climate Change. Referring to the findings and key results, UN General Secretary António Guterres said that “investing in new fossil fuel infrastructure is moral and economic madness” while also outlining that “such investments will soon become stranded assets”. In this blog post, Andy Gheorghiu explains why new LNG terminals in Germany are not an exception – even after Russia’s invasion of Ukraine. 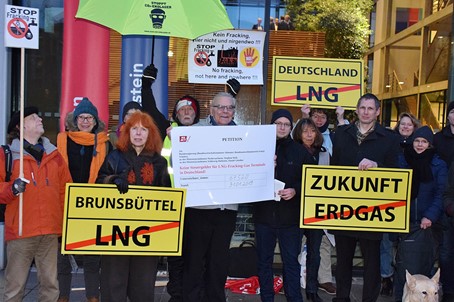 LNG protest in front of the Berlin representation of the federal state of Schleswig-Holstein, January 2019. (© Andy Gheorghiu)

Public subsidies for the construction of LNG terminals in Germany – together with strong political support and a change in legislation that exempts investors from ninety percent of the construction and running costs for the connecting pipeline between terminal and gas grid – have been on the table since the beginning of the renewed debate some six years ago. The reasons behind are that a) investors have a hard time to prove that these fossil projects are economically viable b) the main driving force is of geopolitical not economical or ecological nature. Former German economy minister Altmaier described in 2018 the proposed LNG terminals as a “gesture to our American friends”. Yet, investors had tried to keep a low profile about the prospects of importing gas derived from fracking and some local politicians even denied this being the case. In 2020, former German finance minister Olaf Scholz (now chancellor) offered the Trump administration to invest up to €1 bln in the construction of two LNG terminals in Germany – in exchange for the lifting of sanctions against the Russian Nord Stream 2 pipeline.

As outlined in Part I of these series, before the start of the war in the Ukraine, none of the investors has been capable of making a final investment decision – despite the immense political and public funding nurturing.

It took activists – who strongly oppose the LNG terminals – a bit by surprise when the new German economy and climate protection minister Habeck (Green party) announced in January 2022 that he’s in favour of subsidizing LNG terminals in Germany – while admitting that they are not economically viable. Now, with the invasion of Russia, things move at an even faster pace.

The need to reduce dependency on Russian gas has been known for a very long time and current political attempts to achieve this are understandable. However, the proposed onshore LNG terminals for Germany won’t be able to get online before 2026 – in a best case scenario. The Government claims that a first floating LNG terminal (FSRU) might be operational by the end of 2023 – with two more FSRUs coming online by 2024. There are many open questions related to the actual feasibility of these plans (including outstanding approvals for the floating units, the connecting pipelines and a possible needed expansion of the existing German gas grid in order to be able to receive these additional capacities).

As long as we have not implemented a proper Russian gas embargo, all these fossil projects are being planned in addition to the existing European gas infrastructure. And at the end of the day, Russia profits from LNG infrastructure in Europe, meaning that Germany might well end up importing Russian LNG via its proposed LNG terminals – as also confirmed by the German Economy Ministry. This ministry also outlined in 2019 that Germany is well placed to diversify its gas supply by using the existing national and European infrastructure – with the option of LNG imports from neighbouring countries. The German Government re-emphasized it in the national “Emergency Plan for Gas”.

US vs. Qatari vs. Russian LNG for Europe

Since the Trump-Juncker deal back in July 2018 (when the EU agreed to buy more fracked LNG in exchange for the suspension of US tariffs on European steel and automobile goods) the US-EU LNG trade increased by 2418% (as of 2 February 2022).

In 2021 23% of US LNG exports were destined for the EU, accounting for 28% of all EU LNG imports. With the announcement of a “task force to reduce Europe’s dependence on Russian fossil fuels” US and EU agreed on March 25, 2022, to increase the LNG trade. The US wants to ensure an additional 15 bcm of LNG for the EU in 2022, while the EU wants to make sure EU Member States buy some 50 bcm/year of US LNG by 2030. No one explained how the increase in fracked gas should be “consistent with our shared net-zero goals” or talked about the dire environmental, climate and public health impacts of an increased fracking and LNG production in the US.

In the context of current European gas imports, one should not ignore the quite important LNG exporter role of Russia. In 2019, Russia supplied 20% of the EU total LNG imports (second after Qatar with 28% and ahead of  the US with 16%). 2020 saw Russia with 20% again as one of the top three LNG exporters to the EU (third in place after the US with 22% and Qatar with 21%). In the first three quarters of 2021, Russia was again amongst the top three LNG supplier to Europe (after the US and Qatar). Some LNG terminals in North-Western Europe (in particular the ones operated by investors behind the proposed German terminals) have actually opted in recent years for Russian LNG to improve their rather suboptimal utilization rate. 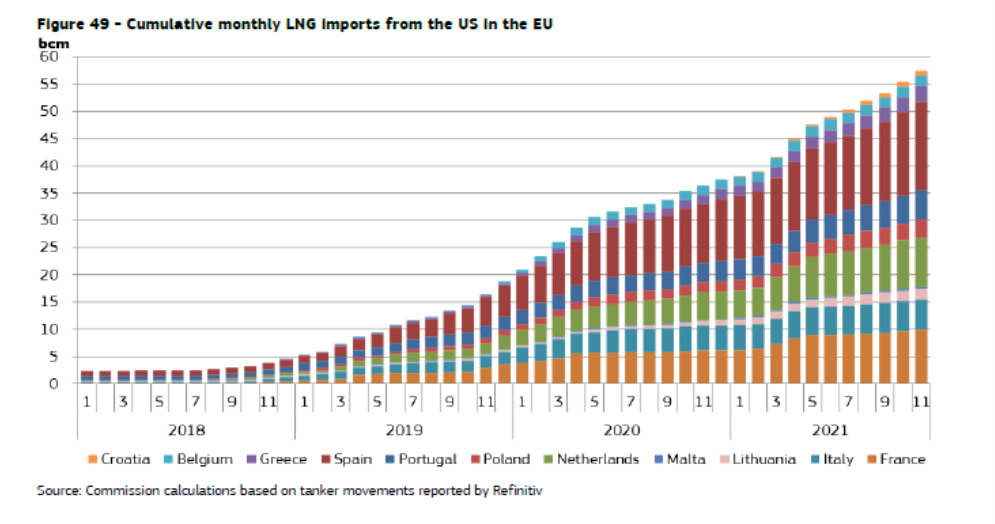 In an attempt to avoid the fracked gas imports at home, Germany’s economy minister Habeck recently travelled to Qatar to kick-start talks about a possible supply with LNG. But Qatar already cautioned about additional supplies and denied claims that proper negotiations have already started. The country is also known to prefer long-term contracts on a principle which should be in contradiction to EU’s and Germany’s climate targets and the proclaimed aim to reduce gas consumption. 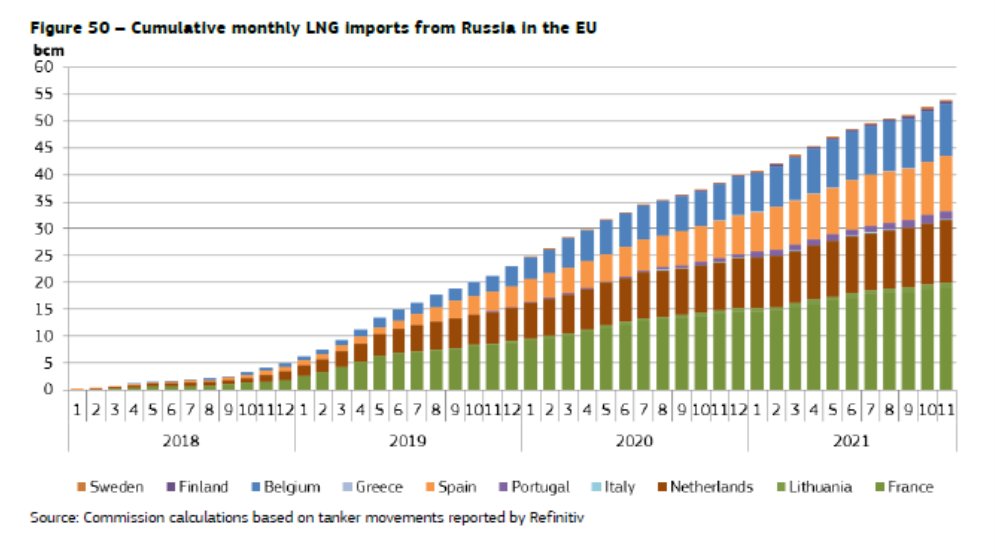 Fossil gas (consisting mainly of methane) is just another fossil fuel that we need to phase-out if we’re serious about tackling the climate crisis. When released into the atmosphere, methane has a global warming potential of up to 108times higher than CO2 over a period of 20 years (which is exactly the timeframe we have left to avoid the worst outcomes of climate change).

The scientific evidence reveals that the gas industry is extremely leaky in its full lifecycle, making it anything but clean or climate friendly. The production of LNG also goes along with the loss of 10-25% of the energy volume of the used gas.

According to calculations by Prof. Howarth, Cornell University, LNG imported from the US to Europe could have a greenhouse gas footprint that is 40% higher than that of coal. New data shows that the oil and gas industry’s “ultra-emitters” can be found in the US, Turkmenistan and Russia. 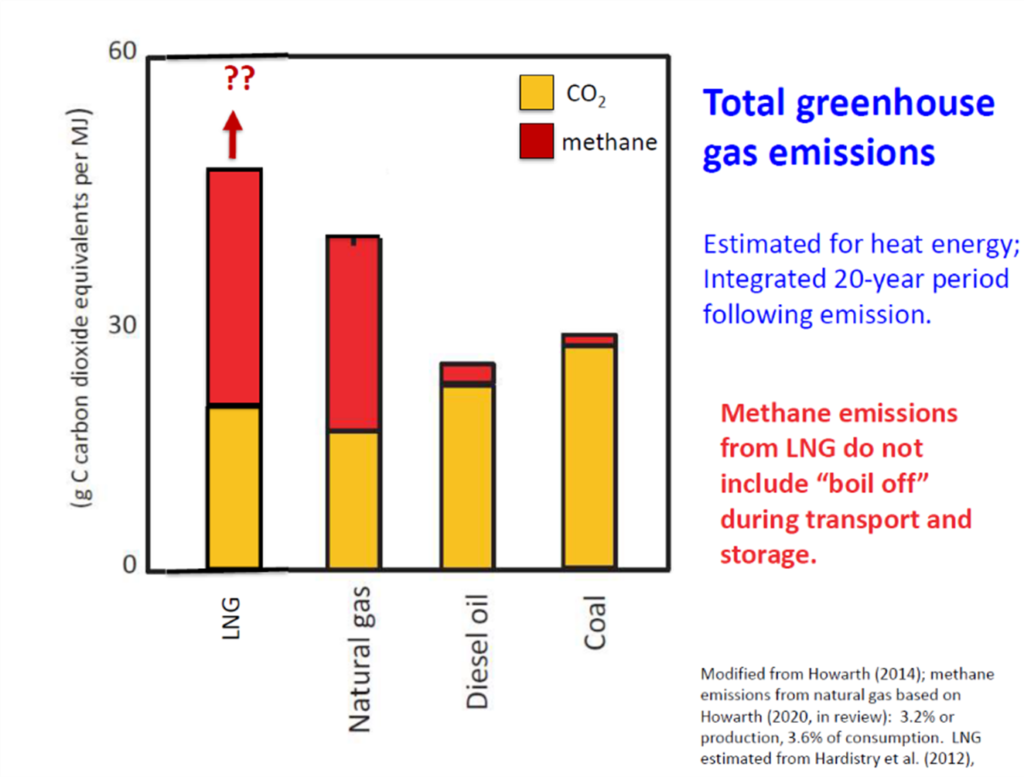 An increased LNG trade comes therefore with a huge climate and environmental cost. Given the fact that the economic lifespan of new gas infrastructure is at least 30 years, it becomes obvious that we can not afford constructing these projects. Any attempts to ignore that will lead to either a fossil lock-in or stranded assets.

Sustainable and just energy transitions must be prioritized

It’s unfortunate and draining that – after so many years of so much scientific and economic clarity about the need for divestment – we still have to debate unnecessary and global warming increasing fossil fuel projects that might not even serve their intended geopolitical purpose, i.e. gaining energy independency from Russia.

The writing is in illuminated letters on the wall: all public subsidies for fossil fuel projects must end immediately and must be channelled into reducing consumption, renewable energy, energy efficiency and decentralized grids.

Europe and Germany really need long term solutions which are in line with the Paris Agreement and the need to phase-out fossil fuels (including fossil gas). An “out of the frying pan and into the fire”-approach is no answer to the existential threat we’re facing!