The war in Ukraine has revealed the dependency of Europe on Russian gas. For a long time, gas has been touted as a bridge fuel. Now it turns out that gas is not only a significant contributor to the climate crisis but also a fuel to co-finance Putin’s war machine. A fast phase-out of fossil gas is inevitable, but some think that liquefied natural gas (LNG) will help the EU get rid of the Russian dependency. In this blog series, Andy Gheorghiu describes the situation in Germany and explains why the proposed LNG terminals are a climate disaster and risk to deepen the fossil dependency. 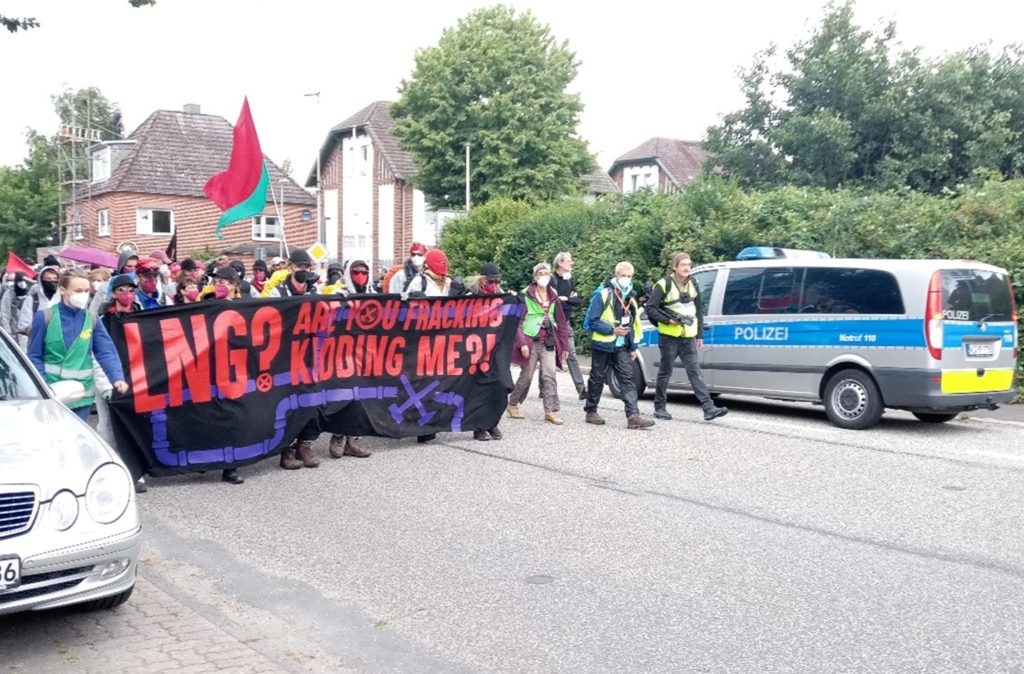 The history of LNG terminals reaches back to the 70ies when the first project at Wilhelmshaven was debated, but never realized. It took another 25 years until E.ON (now Uniper) presented new plans. Three more years down the line in 2008, E.ON announced that the company is scrapping the plans for Wilhelmshaven and favours an investment into the Gate LNG terminal at Rotterdam.

Almost a decade later the debate started again – this time with Brunsbüttel, Stade and Wilhelmshaven in the race. A comparative study, conducted in 2017, found Wilhelmshaven to be the best location. After an unsuccessful market test to show binding interest, Uniper announced in April 2021, that the company will drop the LNG idea in favour of plans for a green hub for Wilhelmshaven. Plagued by delays, none of the investors for all the proposed terminals had been able to make a final investment decision before February 2022. However, the war changed dynamics dramatically.

Make seven out of three

Not only is Uniper back in the game at Wilhelmshaven. We’re now debating up to seven terminals for Europe’s largest gas consumer and trader.

German LNG, the company who kick-started the LNG Brunsbüttel project, is a joint venture between Gasunie, OIltanking and Vopak. Gasunie and Vopak are the developers of the Gate LNG terminal at Rotterdam which actually positioned itself as a hub for Russian Yamal LNG volumes. LNG Brunsbüttel will become an integral part of the petrochemical cluster ChemCoast Park  providing inter alia Yara – dubbed by the French NGO Grain “the Exxons of agriculture” – with gas for the production of fertilizers. Yara consumes – according to own statements – roughly one per cent of the overall gas consumption of Germany at Brunsbüttel. This corresponds to 10 percent of the proposed regasification capacity of the terminal.

Originally, German LNG wanted to make a final investment decision by the end of 2019 and the terminal  was deemed to be operational in 2022. After a “strategic review”, Vopak announced in November 2021 that they will no longer function as an active investor for the German LNG project – citing a loss of €11.1 million.

After Russia’s invasion things have shifted and Germany’s minister for economic affairs and climate action Robert Habeck is pushing the project forward. On March 5, 2022, the state-owned bank KfW signed a Memorandum of Understanding with Gasunie (100% owned by the Dutch state) and energy company RWE to build an LNG import terminal at Brunsbüttel. The German Government will own 50% of the shares in the LNG terminal.

There are attempts to accelerate the permitting process but it remains highly unlikely that the terminal will go online before 2026. A legal opinion commissioned by the German NGO Deutsche Umwelthilfe clearly outlines that – based on the Seveso hazard directive – the construction of the Brunsbüttel LNG terminal nearby a former nuclear power plant and petrochemical facilities is not permissible.

The proposed LNG import terminal at Stade on the terrain of petrochemical company Dow Chemical long lagged behind its competitor at Brunsbüttel but is now rapidly gaining ground. The Dow Chemical production site at Stade consumes roughly one per cent of Germany’s overall energy consumption.

Hanseatic Energy Hub (HEH), the company behind Stade, has teamed up with Fluxys which runs the LNG terminals at Zeebrugge (Belgium) and Dunkerque (France), both of which receive and trade Russian gas from the Yamal LNG plant. Fluxys signed a 20-year contract with Yamal LNG for Zeebrugge.

In June 2021, HEH teamed up with GNL Quebec and hoped to be able to start importing fossil gas from Canada but the province of Quebec rejected the project – citing environmental and climate reasons. In February 2022 Canada’s federal government officially acknowledged the findings of the Impact Assessment of Canada (IAAC), which highlights that the LNG project deemed to sell the gas to markets overseas will lead to increased greenhouse gas emissions, negative effects on the cultural heritage of indigenous communities and risks for marine mammals.

The war in Ukraine changed dynamics for Stade, too. On March 31, 2020, German energy company EnBW signed a Memorandum of Understanding for the purchase of at least 3 bcm of LNG from Stade. Dow recently gained official stakeholdership for the LNG Terminal. The application for terminal and port in Stade got submitted in mid-April 2022.

The initial plans of Uniper to build an offshore LNG terminal (Floating Storage Unit – FSRU) were scrapped in 2021 due to a lack of market interest. Uniper’s LNG plans at Wilhelmshaven had a direct connection to the Canadian LNG Goldboro project that was also shelved.

Now, the landscape has changed dramatically. Germany’s maintained gas addiction and the current situation might not only revive the Goldboro project in Nova Scotia but has put several possible LNG terminals for Wilhelmshaven on the agenda. A task force “LNG Wilhelmshaven” was also put in place by the government of the federal state of Lower Saxony.

Uniper’s FSRU unit with up to 10 bcm regasification capacity together with an additional FSRU of the company Nord West Ölleitung (NOW) with up to 9 bcm are envisaged to go online by the end of 2022 or 2023. In addition to that, Tree Energy Solutions, who initially planned to import green hydrogen in the form of synthetic LNG from the Arabic peninsula announced that their import terminal could be used for fossil LNG first – with an estimated import capacity of up to 30 bcm “in the first years”.

Many unknowns and unanswered questions remain

All current announcements – including the calls of additional LNG terminals at Hamburg and Rostock – lack clarity concerning technical details and permitting processes. Challenges also occur in relationship with the connecting pipelines and an inevitable expansion of the existing gas grid (which will be necessary as long as Germany doesn’t cut Russian pipeline supplies). The German government has nonetheless decided to pay nearbly €3 bln. over the next 10 years for the leasing of four FSRUs – without conducting the budget committee of the German parliament. However, opposition remains strong and is ready to challenge the undercooked plans. 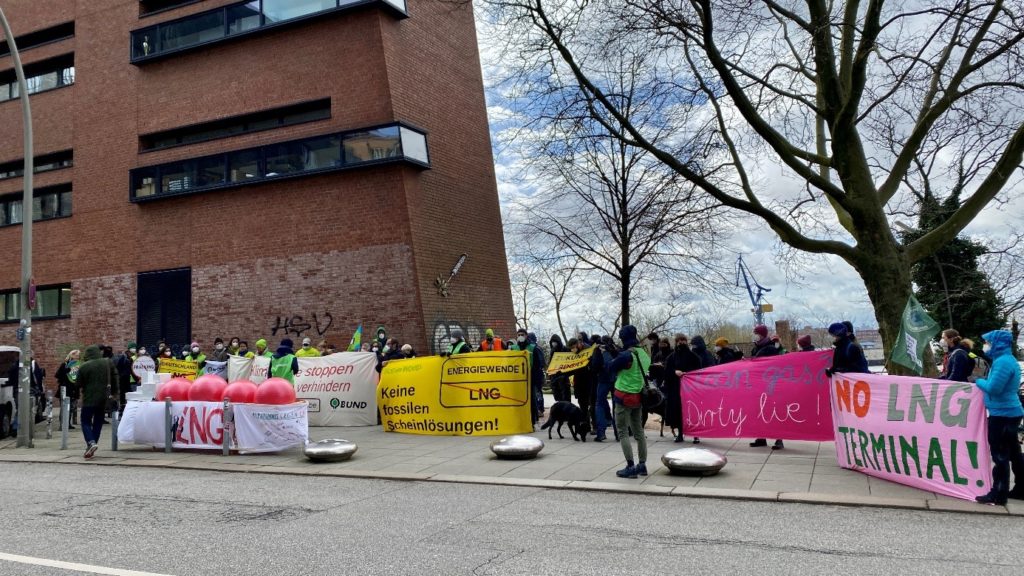 According to a study by the German Institute for Economic Research (DIW) Germany could stop using Russian gas as early as 2022. In the short-term additional LNG imports via the existing LNG terminals in the Netherlands, Belgium and France could be used – in addition to increased pipeline gas imports from Norway or the Netherlands.

The authors highlight that construction of LNG terminals in Germany make no sense „due to the long construction times and the sharp drop in demand for natural gas in the medium term“.

Biggest questions are a) what are the climate costs of LNG imports b) who would supply Germany with LNG c) who would benefit from LNG terminals and d) shouldn’t we focus on gas reduction instead of replacement, especially when talking about mid and not short term solutions? I’m trying to give some answers to these questions in Part II of these series.