Energy efficiency has long been overlooked to the detriment of the larger smart energy transition. Now it’s being shortchanged to the disadvantage of besieged Ukraine. Paul Hockenos explains. 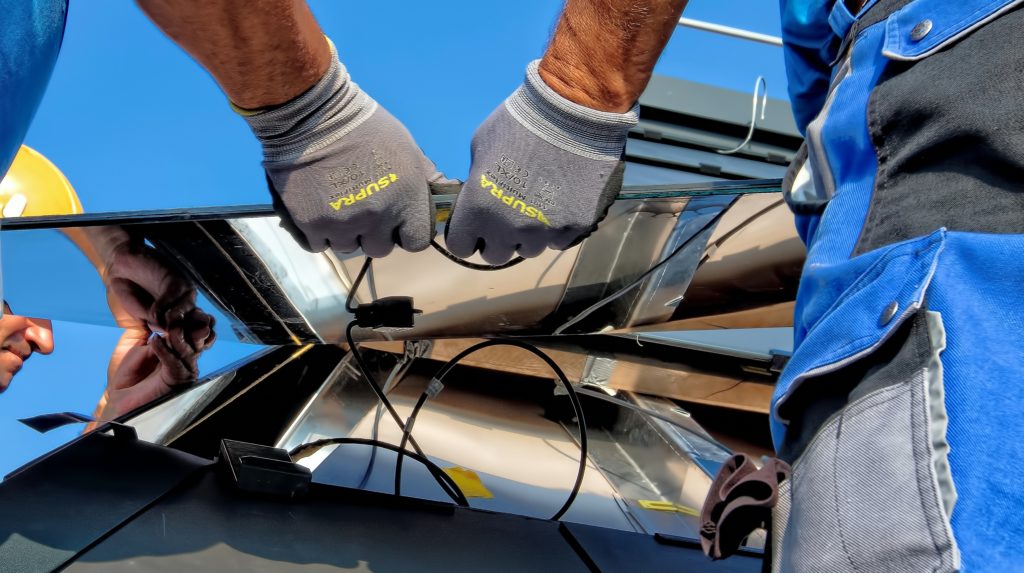 Even though wind and solar energy are the backbone of renewables-based systems of the future, reduction of energy consumption is only win. (Photo by Ricardo Gomez Angel, CC-0)

Often insulating and energy proofing of buildings makes more economic and energy sense than bolting solar arrays to roofs. In the steel, cement, chemicals, and plastics sectors lie massive potential for every savings. And in terms of decarbonizing our society and economy it makes all the sense in the world: the smaller the supply of energy required, the easier it will be to cover it with renewables.

Energy efficiency measures and the reduction of energy consumption have long formed one of the cornerstones of Europe’s climate change mitigation strategy. After all, using less is only win: emissions decrease, prices drop as demand lessens, energy poverty sinks as households pay small bills, overburdened power grids are eased, and fewer renewables are required to decarbonize a smaller energy system.

Indeed, these benefits are why the EU has a 32.5% total energy reduction target by 2030, which will require a considerably faster decline in energy consumption, compared with the efficiency gains achieved from 2005 to 2020. “There is no pathway to net zero that does not prioritise energy efficiency and renewables,” said EU energy commissioner Kadri Simson at the ‘Fit for 55’ launch in July 2021. “Energy efficiency is the unsung hero, without which nothing would happen. It would become impossible or very difficult [to reach net zero] if we don’t reduce the amount of energy we consume.”

Now there’s movement in the European Parliament to up the 2030 target to 43%, which has to be just the beginning of a far-reaching, systematic shift in how households, industries, and localities use energy. In contrast to the supply side, demand constitutes a lever that can be shifted quickly, if need be, should for example either Western countries opt to embargo Russian energy imports – or Putin decide to cut us off. Soaring energy prices now already have us rethinking energy use, though as a result of necessity and not sensible, long-term strategy.

The logic of embargo is this: deny the Russian economy the nearly one billion euros a day it accrues from petrochemical exports worldwide, and Putin’s military machinery will sputter to a stop. At the same time, argue climate experts, such a radical fossil fuel detox – in Europe, two-fifths of gas and over a quarter of imported crude oil comes from Russia – would prompt a seminal shift from coal, gas, and oil to renewables, thus helping the world hit its beleaguered climate goals and bring down prices, too.

Dozens of prominent figures, including Friday for Futures’ Luisa Neubauer, have called for an immediate stoppage of all fossil fuel imports from Russia, calling the Ukraine invasion a “fossil fuel war.” Major think tanks say Europe could pull it off without the economy tanking.

The EU is currently considering an embargo that would follow upon the import bans of the US and UK. Greenpeace underscores that the goal has to be to wean our global economy off all hydrocarbons, not just Russian ones, but that such a radical break with such a major supplier of hydrocarbons is a step in the right direction.

Certainly, a cold turkey ban on Russian imports is a tempting proposition, and in some form viable, even though it would most probably not stop Putin’s Ukraine invasion in its tracks. But it would hurt Russia badly, and to make it work would mean radically rethinking the way our economy and society uses energy.

In Europe, experts and think tanks agree that should push come to shove, energy consumption will be on the chopping block whether we acknowledge this right now or not. The German government, though run with the Greens in charge of energy, haven’t grasped it yet. The Green minister for economy, climate and energy, Robert Habeck, is prioritizing the search for new sources of natural gas and other ways to wean Germany off Russians fuels in “ways that won’t hurt the economy.” But he doesn’t mention conservation.

Natural gas, on the other hand, is a potent fossil fuel and very hard to replace at short notice in energy mixes that rely on natural gas for heating and cooling, industrial processes, and power supply flexibility. The natural gas market beyond Russia is largely tapped out; LNG requires terminals that have to be built; and green biogas on a large scale needs energy crops that skew agricultural markets at the expense of the global South.

Germany and the EU now realize that over a three or four-year span a transition away from Russian energy is doable, and now have emergency plans in motion to make it happen. But they acknowledge that it won’t happen from today to tomorrow: since gas covers most of Europe’s heating needs, switching from gas heating to electrical heating will take many years, even if accelerated, which is currently the plan in Europe. Wind and solar energy, the backbone of our renewables-based systems of the future, will eventually displace a good chunk of gas’s service, yet they too take years to buildout (nuclear takes decades, which is just one reason it is not an option).

Yet, until then even Robert Habeck and the Green foreign minister Annalena Baerbock balk at the prospect of a complete, immediate stoppage of Russian fossil fuel imports. (As of August, the EU will ban coal imports, just a meager 3 percent of the financial value of Russian energy exports.) This, they say, would trigger mass unemployment and economic chaos, as well probably as rolling brownouts, industrial stoppages, and severe supply chain bottlenecks.

The key is not the energy supply side, but rather demand. The Brussels think tank Bruegel estimates that should Russian energy inflows stop, Europe would be left with a shortfall – which would mean that, “Europe would need to reduce demand by at minimum … 10% to 15% of annual demand. This is possible.”

Sure it’s possible – and the Greens should be at the front of the pack making the case.