The pandemic may well change our transport habits for the better – at least in cities. Public transport and eventually even cars will be increasingly shunned in favour of bicycles. Michał Olszewski reports from Warsaw, Poland. 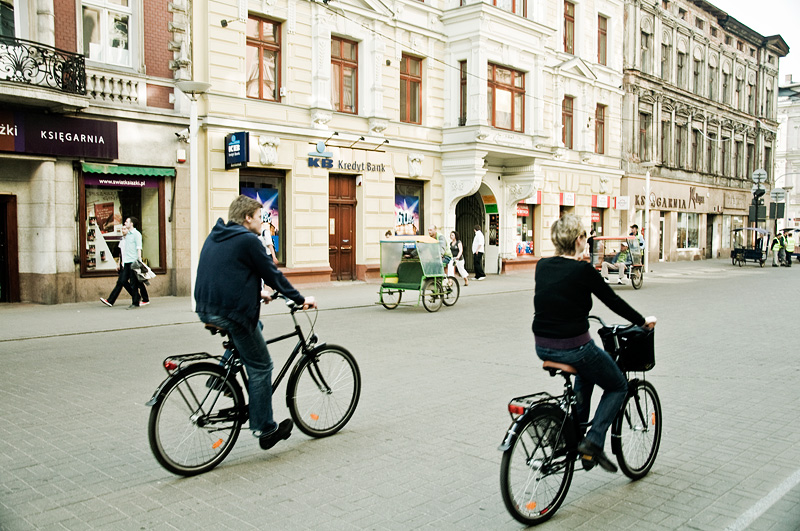 In Poland, the number of cycling journeys rose during the pandemic. (Photo by Ewelina Korzeniowska, CC BY-NC-ND 2.0)

The plans were grand: in 2016 the Polish PM Mateusz Morawiecki unveiled the “Towards Electro-mobility” project, announcing that one million electric-powered vehicles would drive on Polish roads by 2025. Little has come of these impressive pledges which, it soon transpired, were unrealistic. The ambitious target of reaching 600,000 electric and hybrid vehicles by 2030 is enshrined in “Poland’s Energy Policy 2040” (PEP2040) and it is still unclear how this goal will be struck. Right now the number of electric and hybrid vehicles registered in Poland stands at just 27,000. There is a steadily growing interest in electric and hybrid cars, but customers aren’t exactly storming car dealerships in search of these types of vehicle. This is hardly a surprise. The electric vehicle charging infrastructure is still in its infancy: in mid-2021, there were just over 1,500 charging stations. The majority of these are sluggish AC chargers with an output of 22 kW or less. There only are some 500 DC outlets for quick charging. Experts report that stations with an output of 50 kW are still installed in Poland, meaning that they take an hour and a half to fully recharge some cars – far too long to suit clients’ needs. In addition, the production of the Izera, a Polish electric car, is also in its infancy. Without close cooperation with a car giant, it might be difficult for the project to bear fruit. This is hardly surprising, given that the Polish automotive industry centres on component production. Launching a new vehicle model, especially one that is as green as they come, is an exceptionally challenging task.

We should mention these great plans because they demonstrate a certain pattern. Politicians find it easy to draw ambitious plans for the launch of a new vehicle, but they are reluctant to engage in existing projects that require completion and financial support. For some reason, they fail to spark the imaginations of decision-makers as much as investment plans – and this leads to absurd, damaging and financially irrational actions. While we might understand an attempt to find room in the electric vehicle market, the announced gigantic investment in inland waterway transport has no justification in reality. Contrary to economic balance and environmental costs, the Polish government is preparing a gigantic project entailing, among other things, joining the upper Vistula and upper Oder systems, making it possible for large barges to reach Krakow and bringing cargo shipping to the middle and lower Vistula. The reasons behind the plan remain unclear. Experts suggest it would be much wiser, and cheaper, to revisit the modernisation and development of the rail network, the potential of which was revealed by the unveiling of a section of the E30 railway line, designed as the rail skeleton of Europe. Even now, taking a train between Kraków and Katowice is faster and cheaper than driving.

If we talk about mobility, we must not overlook yet another change in regular behaviour that transpired during the pandemic. Cycling experts in Kraków compared September 2020 with the same period back in 2019. The number of cycling journeys rose by 27% on weekdays and by 62% at weekends. This trend is irregardless of the weather. Even on rainy days there were enough cyclists to make the shift seem obvious – the denizens of Krakow switched to bikes. The situation is similar in other big cities like Gdańsk. Sooner or later the visible consequences of the pandemic will ease off, but it may well turn out that our transport habits change for the better – at least in the cities. We will opt for public transport and cars less, and choose bicycles, as a convenient alternative. But a shift away from public transport entails a significant risk: if residents of larger cities abandon public transport en masse in favour of other means of transport, entire transport policies of basically all large local governments, which in recent decades pumped billions of zlotys into the development of ecological and modern public transport, will begin to crumble.

It is not yet clear how Poland will use the funds from the European Green Deal. The direction is simple: a 90% reduction in transport emissions across Europe by 2050. Low- and zero-emission public transport, control systems and more efficient stock management will all have a chance of receiving financing. This gives Poland the opportunity to thoroughly modernise its public transport and fix the mistakes made back in the 1990s when mobility meant owning a car. The effects of these mistakes include large transport exclusion zones and excessively heavy road haulage. The remedy, however, does not lie in outdated waterway ideas or further development of car transport. The breakthrough that has happened in cities, which have invested in ecological forms of transport, cycling routes and facilities for pedestrians, should spread all over the country. In my view, repairing old Silesian railroads is far more important than the canal joining the Oder with the Vistula; buses, trains and bikes are much more important than electric vehicles. Without actually abandoning the old-fashioned transport schemes, modern mobility will remain just a buzzword, suitable only for political conferences. Instead of reaching for the stars, decision-makers should focus on the ground beneath their feet, as this is where the most crucial transportation tasks await.