During COP26 in Glasgow, Romania’s caretaker government announced a surprise new partnership with the United States to develop a fleet of so-far unlicensed Small Modular Nuclear Reactors (SMRs) to help replace it’s aging coal-fired infrastructure. The announcement builds upon the €8 billion deal the two nations signed over the summer of 2021 to refurbish one reactor at Romania’s only nuclear plant, while constructing two more on site. Michael Buchsbaum reviews Bucharest’s nuclear ambitions in this installment of the ongoing Romanian Power Move series. 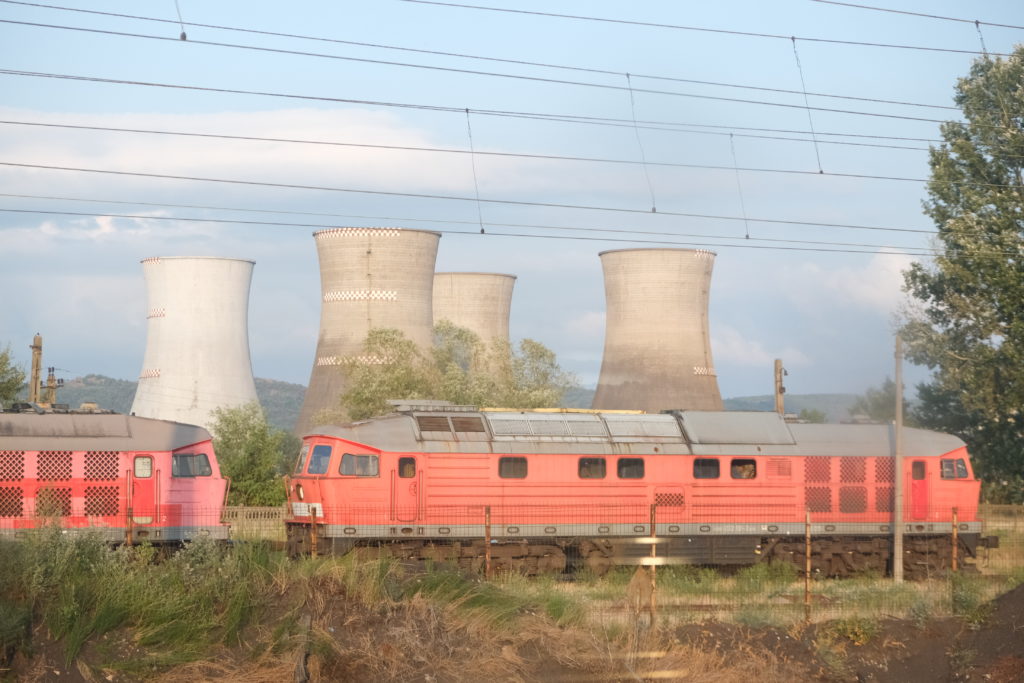 Normally hauling lignite coal trains from nearby mines to the huge Turceni power plant, Romania’s largest, plans are being developed to replace coal power with nuclear by 2032. (Photo by Michael Buchsbaum ©)

With most of the international media focused elsewhere, on the fringes of the COP 26 climate conference in Glasgow, US Special Presidential Envoy for Climate John Kerry and acting-Romanian President Klaus Iohannis met to seal a long sought after deal to become the first nation worldwide to construct a fleet of experimental modular nuclear reactors.

US Secretary of Energy Jennifer Granholm welcomed news of the agreement, deeming the still untested technology developed by the American firm, NuScale Power, as “pivotal.”

“The US has been supporting the development of SMRs for decades. It is extremely gratifying to celebrate this important milestone for Romania to help them achieve their climate goals,” Granholm said.

With help from the American government, NuScale has developed a technology based on small nuclear reactors (similar to those used by nuclear submarines), for which it received US authorization. Officially, the United States government has invested more than $450 million in developing and licensing NuScale’s reactors.

According to NuScale, their cost could be above $3.5 billion per gigawatt of nuclear energy.

If the construction in Romania goes ahead, it will mark the first deployment of such SMR reactors anywhere in the world.

In Europe, however, these mini-nuclear reactors are not yet licensed.

The firm says that each individual SMR is capable of generating as much as 77 MW, and the US will help Romania build between 8 and 12 such small reactors.

The deal also enables Romania to receive a $2 million grant from the US Department of State sponsored Nuclear Futures Package.

A spokesperson from the program related to Euractiv that the money will be used to make Romania a “SMR educational and training hub in the region.”

The Nuclear Futures Package also includes programs to advance large-scale nuclear generation; demonstrate the potential of nuclear-produced hydrogen to fuel the transition to clean energy; and advance innovative, secure, and safe nuclear technologies such as SMRs.

“We’re bringing now an energy mix and a technology that is safe, clean, resilient, scalable and affordable,” said the CEO of Romania’s state-owned Nuclearelectrica, Cosmin Ghita. Constructing the proposed SMRs “exactly matches the goals that we’re trying to put here at COP for the next generation,” he said.

Since coming into office, according to a recent Atlantic Monthly piece, US President Joe Biden’s administration has turned America’s cohort of “advanced nuclear” start-ups and their smaller and (hopefully) safer reactors into a facet of its climate diplomacy.”

In addition to Romania, NuScale has concluded memoranda with state energy companies from Poland, Bulgaria and Ukraine.

The US also plans to help other nations including Kenya, Brazil and Indonesia to develop similar reactors as part of an initiative launched at the US-led Leader’s Summit on Climate held earlier in 2021.

The climate crisis presents “a market opportunity for carbon-reducing technologies” such as nuclear power, said Secretary Granholm, while touting a $23 trillion market by 2030 to countries in Central and Eastern Europe.

The locations of the small-sized nuclear reactors are still to be decided, but some may be built next to closing or already shuttered coal-fired power plants, according to Nuclearelectrica.

The US firm will help it’s Romanian client evaluate the technology, and together, the companies will take steps towards deploying a first NuScale 6-module power plant as early as 2028.

According to a joint statement released by the two firms, the new nuclear units provide an “affordable zero-carbon baseload power technology” that could both fill the void left by coal and be built “on retired coal plant sites.”

Moreover, their construction “will support the government of Romania’s National Recovery and Resilience Plan to phase out 4.59 GW of coal fired energy production by 2032,” according to the joint statement.

Additionally, by repurposing the shuttered coal plants “Nuclearelectrica and NuScale can help communities and plant workers participate in the transition to decarbonized energy, while also continuing to provide local economic benefits.”

The companies estimate the NuScale 6-module power plant will help Romania avoid 4 million tons of CO2 emissions per year, or up to 45 million tons when fully deployed according to Third Way, a centrist US advocacy group.

The new agreement is harshly criticized by environmental organizations, with Greenpeace activists claiming that “Romania would become a guinea pig for insufficiently tested nuclear technologies.”

Nuclearelectrica currently operates Romania’s only nuclear power plant, the Cernavodă NPP located in the southeast of the country.

With two reactors in operation, the plant generates some 1.4 GW of electricity using largely Canadian technology.

However for nearly a decade, various Romanian governments have been trying to put together an international deal to construct two additional reactors.

With an 82.49% stake in Nuclearelectrica, Bucharest recently broke off years of complex negotiations with Chinese investors. These discussions ended shortly before new talks with the United States began.

In late 2020, Bucharest signed an $8 billion (€6.7 billion) deal with Washington to both cooperate on building Units 3 and 4 and rebuild Unit 1. The Intergovernmental Agreement between the countries was ratified in July 2021. 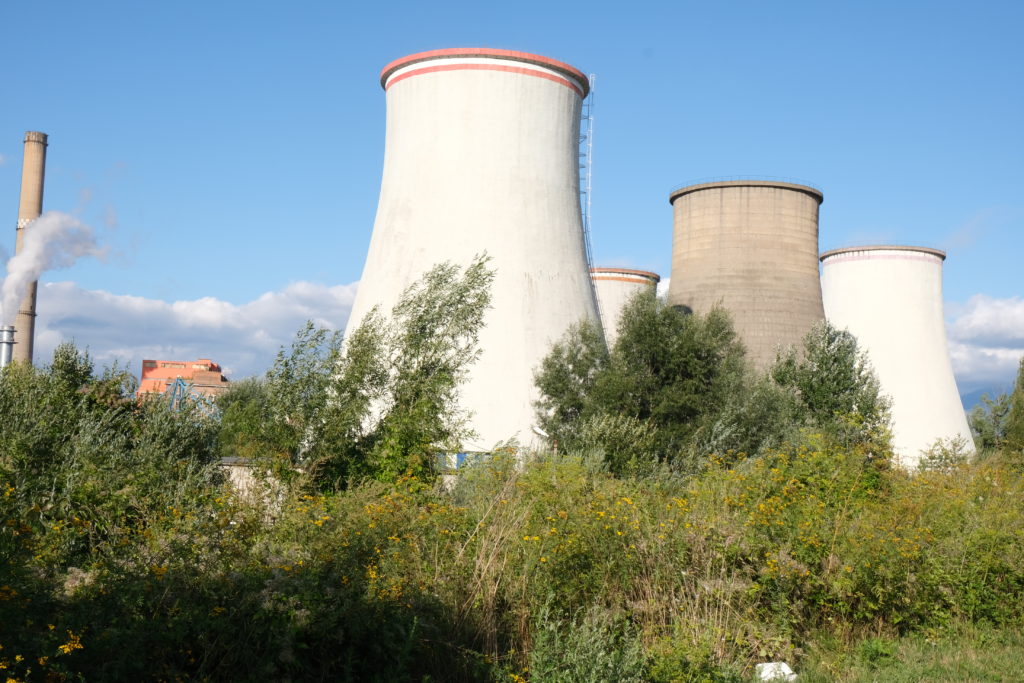 Will Romania undergo a massive nuclear expansion? After signing a deal with the United States at COP26 in Glasgow, American money may pay for the construction of two new nuclear reactors, so far Romania’s only one in operation. (Photo by Michael Buchsbaum ©)

The project is included in Romania’s energy strategy through 2030, with the possibility of operating through 2050. It’s also listed in their National Integrated Plan in energy and climate change.

Nuclear energy is “a pillar of Romania’s energy independence” and strategy in “reaching its decarbonization targets as a EU member state,” Nuclearelectrica said in the statement.

For the past 20 years, the plans to build two new units were there. And civil society has long opposed the expansion because of the risks that are associated with it,” said Alexandru Mustata, a campaigner with Europe Beyond Coal.

“It takes way too much time to deploy nuclear energy,” continued Mustata. “And by the time they would be able to actually start using these units, the market will show us that it is much cheaper to use renewables together with storage,” he predicted.

Note to readers, you can now read more and even hear excerpts of the interview with Alexandru along with other NGO campaigners and energy experts throughout our new Romanian Power Move blog and podcast series.