From its Dubai headquarters in the United Arab Emirates, the intergovernmental organization engages with over 180 member nations in a global effort to speed a sustainable energy transition. Founded in Bonn, Germany, this year IRENA’s Innovation and Technology Centre (IITC) is celebrating its tenth anniversary there. Lead blogger and podcaster, Michael Buchsbaum interviews the IITC director, Dolf Gielen and reviews some of IRENA’s world changing initiatives. 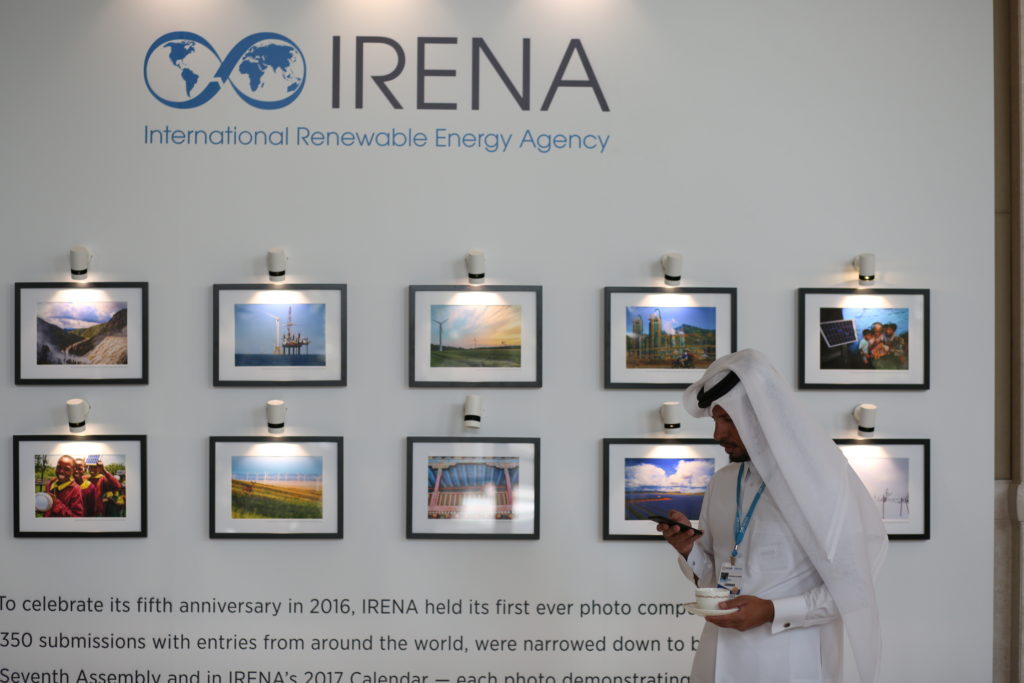 During COP26, the UAE and IRENA announced their fund to expedite the renewable energy uptake. (Photo by IRENA, CC BY-NC-ND 2.0)

On the banks of the Rhine River in the former German capital, in 2009 governments from over 75 states launched the International Renewable Energy Agency (IRENA), making clear their collective commitment to changing the global energy paradigm.

With this mandate, IRENA’s mission is to promote, support and enable the widespread adoption and sustainable use of all forms of renewable energy, including bioenergy, geothermal, hydropower, ocean, solar and wind energy.

Now headquartered in the United Arab Emirates in Abu Dhabi, the intergovernmental organization is actively engaging in the fight against climate change, energy poverty and air pollution while promoting socioeconomic development, growth, and job creation.

“Our role is primarily to help accelerate the role of renewables and provide an enabling framework that will facilitate the phase out of fossil fuels,” said Dolf Gielen, director of IRENA’s Innovation and Technology Centre (IITC) in Bonn in an interview with Energytransition.org.

“We have a number of on-going processes with member countries to provide them with information about renewables and help them in developing and implementing their transition strategies,” continued Gielen.

Since its launch, IRENA has more than doubled its membership to almost 180 different states, countries and applicants.

“Its a very diverse membership, going from small island states to economies the size of China, the United States and European Union, which of course, all have very different questions.”

Though the main office is a continent away, one of IRENA’s core facilities, their Innovation and Technology Centre (IITC), remains in its birthplace.

At the forefront of outlining how renewable technologies have evolved into the main pillar of the global energy transition, the Centre tracks the significant cost reduction of renewable technologies and innovation trends year-on-year. It also helps the agency engage with the G7, G20 and other international forums while leading much of the strategic planning around IRENA’s green hydrogen projects.

Last October, IRENA marked the 10th anniversary of the IITC’s official opening. “I picked up the key here 10 years ago,” reflected Gielen.

With a staff of nearly 100, the Centre also contributes greatly to Bonn’s city-wide sustainability hub. Following unification and the new German government’s move to Berlin, many of the former capital buildings were given over to over 150 different NGOs, the largest being the United Nations.

“We have a fantastic new here building thanks to the support of the German government – but unfortunately, even though we moved in February last year, the ongoing COVID pandemic has prevented us from being able to fully use it as a base for international dialogue,” lamented Gielen.

Once it abates, he looks forward to once again hosting meetings. “Our ‘Innovation Week’ has become one of our keynote events. This Fall, we hope we can pick up where we were before this crisis,” he said.

During November’s COP26 talks in Glasgow, the UAE and IRENA announced the creation of a $1 billion fund to accelerate renewable energy uptake worldwide.

To date, ADFD has worked with clean energy partners and governments in 65 countries to support the development of 90 renewable energy projects with a combined capacity of more than 9,000 megawatts of electricity.

Following COP, in late 2021, IRENA and the Government of Costa Rica signed an agreement to work together to strengthen the country’s decarbonization plans and boost renewable energy project financing.

Signed by Costa Rica’s President, Carlos Alvarado Quesada and the IRENA Director-General, Francesco La Camera in Abu Dhabi, during their meeting, the two discussed the creation of an investment roadmap to identify financing opportunities and regulatory frameworks for major national projects.

“This partnership will help us continue our advance towards the ambitious goals of our National Decarbonisation Plan 2018-2050, in particular by fostering our efforts regarding green hydrogen production,” said President Quesada.

Though Costa Rica generates more than 90% of its electricity from renewables, the country plans to fully eradicate the use of fossil fuels by 2050, transforming its transport, heating, and industrial sectors in the process.

Their new partnership follows upon a November agreement between IRENA and the Latin American Energy Organisation (OLADE) to work closely in efforts to scale up the deployment of renewable energy across the continent and the Caribbean region.

Today some 61% of Latin America’s power generation capacity is from renewables and overall renewable energy accounts for more than a 26% share of the region’s primary energy supply, among the highest shares of renewables in the world.

“We have worked closely with OLADE for quite some time,” said Gielen, and together the two organizations are targeting at least 70% renewables by 2030. Building upon the region’s hydro-dominated power supplies, “we see that new forms of renewables such as solar PV and wind but also geothermal will play an increasing role there.”

IRENA recently completed a study for almost 100% renewables-powered Uruguay. As their next step, Uruguay “now wants to decarbonize their transportation sector. So the question was, how to design that electromobility strategy. We are also discussing the role of hydrogen in such a transition. And we’re happily coordinating similar discussions with other OLADE members,” continued Gielen.

The first international high-level meeting following the recently concluded COP26,  the 12th session of the IRENA Assembly in Abu Dhabi will take place from 15 to 16 January 2022.

Bringing together Heads of state, ministers and energy decision-makers from among IRENA’s members as well as multilateral organizations, global stakeholders and private actors, sessions will focus on the geopolitics of green hydrogen, adaptation, finance and investment, just and inclusive transition, renewables in end-use sectors and breakthroughs around geothermal energy.

The sessions will be live-streamed on the IRENA Assembly Live webpage.

At an upcoming Global Energy Transition Podcast, hosted by lead blogger, Michael Buchsbaum, readers will hear more of the interview with the Director of IRENA’s Innovation and Technology Centre, Dolf Gielen.