At the beginning of the COP26 the United States, the European Union and over 100 partner countries launched the so-called Global Methane Pledge – aiming at reducing global methane emissions by at least 30 percent from 2020 levels by 2030. The overarching goal is to limit global warming to 1.5 degrees Celsius above pre-industrial levels (1850-1900). At the same time, the EU Commission is working on a legislative act to reduce methane emissions in the oil, gas and coal sectors. Andy Gheorghiu summarizes the state of play, explains the importance of the petrochemical sector and the supply chain and questions how ambitious the upcoming EU methane regulation might be. 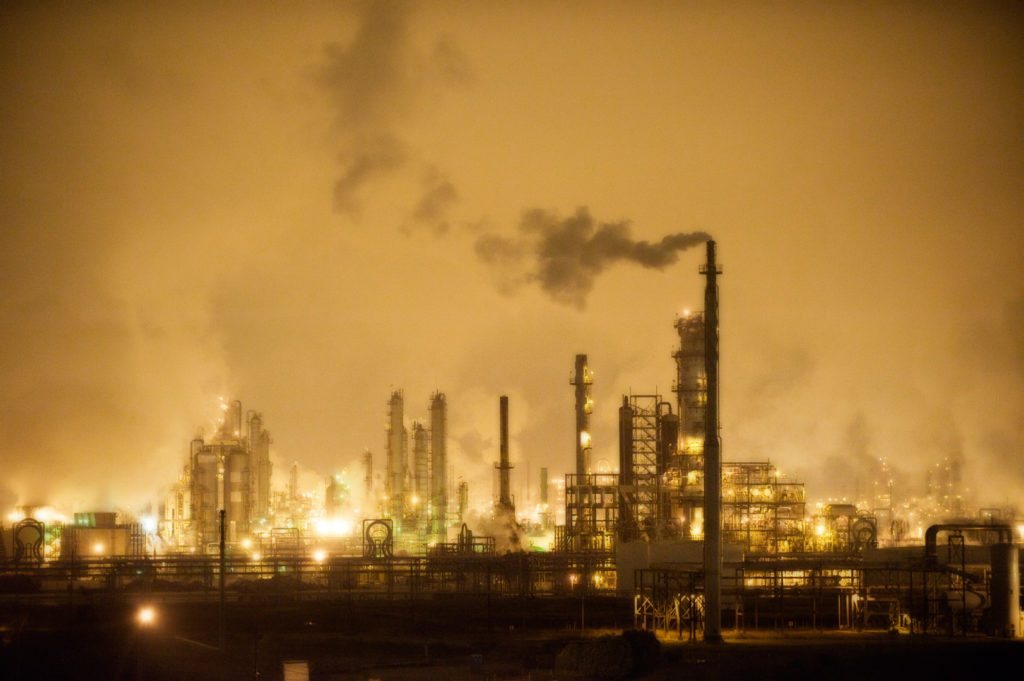 The petrochemical sector is a driving force for an increasing global warming. (Photo by Louis Vest, CC BY-NC 2.0)

Methane: Low-hanging fruit in the fight against global warming for a decade

Methane, the main component of natural gas, is highly potent shot-lived climate pollutant. According to the latest published numbers by the Intergovernmental Panel on Climate Change (IPCC) the global warming potential of fossil methane is up to 108 higher than that of CO2 over a 20 year time period and up to 41 times higher over 100 years.

Scientists and climate activists have long called on politicians to pay attention to and address the significant global warming of methane instead of falsely promoting fossil gas as climate friendly solution that might help solving the climate crisis. Back in 2011 Robert Howarth and Anthony Ingraffea, both Cornell University, Ithaca, New York, published a scientific letter that looked for a very first time deeper into methane and the greenhouse-gas footprint of natural gas – in particular from shale formations. Although attacked for their findings time gave them right.

Only three years later, the Oil and Gas Methane Partnership (OGMP), was launched at the 2014 United Nations (UN) Secretary General’s Climate Summit – aiming at cutting methane emissions as the low-hanging fruit in the fight against global warming. However, it took another six years until the EU Commission finally presented a strategy to reduce methane emissions.

While the EU Commission worked on presenting a proposal for a methane regulation, the EU Parliament made use of the time and presented its own-initiative report on the issue.

On October 21, 2021, the EU Parliament adopted with 563 votes to 122 and 11 abstentions, a resolution which calls on the Commission to propose binding measures and methane reduction targets for all sectors.

It calls, inter alia for

EU Commission proposal: weak supply chain coverage and petrochemicals out of the equation

In its inception impact assessment for a proposal for a legislative act to reduce methane emissions in the oil, gas and coal sectors the EU Commission highlighted that “most of the fossil fuels consumed in the EU are imported, and 75-90% of the methane emissions associated with these fuels are emitted before reaching the EU’s borders”. The Commission also states that “obligating non-EU entities supplying energy to the EU as well as EU actors would therefore considerably increase the benefits of such legislation, both in terms of improving information on methane emissions and mitigating them.”

However, the EU Commission’s proposal for a regulation on methane emissions reduction in the energy sector lacks the ambitious and robust approach preferred by the EU Parliament.

Within EU’s borders measurement, reporting and verification of energy sector methane emissions and the reduction of emissions through mandatory leak detection and repair as well as a ban on routine venting and flaring will be required. However, the proposal does not contain binding target reductions nor does it tackle the supply chain in a robust way.

At least, importers of fossil energy to the Union shall be required to provide importing Member states with information on their methane emissions and measures to mitigate them. Member States will then have to report back to the Commission on a yearly basis. Member States have also the obligation to define the rules on penalties to infringements of the Regulation – a proposal which also weakens a needed strong and harmonized European approach to the methane emissions problem.

The Commission wants to work on establishing a global methane monitoring tool based on satellite data and the data provided by the Member States. By 31 December 2025 – or earlier if the Commission thinks that sufficient evidence is available – the Commission will consider strengthening requirements for importers.

Clearly, the measures are good intended but leave space for Member States to play around with their ambition of penalties – which will have a direct impact on the implication of the intended methane emissions reductions. The proposal also definitely doesn’t go far enough with regard to the main source of European methane emissions (ie imports) and doesn’t mention a key climate polluter and industrial player in Europe (ie the petrochemical sector).

The petrochemical sector is already the largest industrial consumer of fossil fuels, accounting for 14% of global oil and 8% of gas primary demand. Oil and gas are being used as a energy source and as the key feedstock for petrochemical and plastic production. According to the International Energy Agency the petrochemical industry will remain a pillar of growth for the projected oil consumption until 2026 – making it therefore a driving force for an increasing global warming.

Over the last decade the so-called fracking boom in the United States also led to an increased production of natural gas liquids (NGLs, ie ethane, propane and butane) which can be found alongside methane in geological layers. Some basins such as the Marcellus and Utica Shales in the USA are rich in NGLs and low prices made it attractive for European plastic producers to switch from naphta (ie crude oil) to NGLs (mainly ethane) as a feedstock for the production of virgin plastics (such as ethylene).

One of the pioneers and most vocal promoters of this new fracking for plastics supply chain is EU’s number 1 ethylene producer, Ineos, the Swiss-British company owned by billionaire Jim Ratcliffe.

In December 2021, CIEL, published a new report that summarizes some key facts and features of the flows of natural gas liquids (NGLs) from the United States to Europe (including to Norway and the United Kingdom) and the broader context of such flows both in the United States and in Europe.

The key messages are clear:

But it’s not only the US who’s increasing production in ethane and trade with Europe. Russia’s ethane production could be ramped up more than ten-fold by 2025. The country is already the one the largest supplier of crude oil and natural gas to the European Union.

Surprisingly enough, the key demands for coverage of supply chain and inclusion of petrochemicals is actually backed by the European Chemical Industry Council (CEFIC). According to their statement methane emissions during the exploration and production of oil and gas is by far the largest contributor across the supply chain of the production of plastics and petrochemicals. However, venting and flaring of fossil gas plays also a role for the sector and requirements to measure and mitigate methane emissions should also apply here.

The writing is neon letters on the wall and the evidence is clear: if the European Union is really willing to stay firm on its commitment under the Global Methane Pledge, the domestic ambitious climate targets and its obligations under the Paris Agreement it has no other option but to adopt a stricter language with regard to the necessary coverage of the full supply chain and it must clearly address the petrochemical sector in the upcoming methane regulation!

The upcoming trilogue negotiations between Commission, Council and Parliament will show if Europe is willing to be the climate leader the world needs.