Hydrogen has emerged as a key element in the race to net-zero worldwide. South Korea is one of the most proactive advocates of hydrogen, passing the world’s first hydrogen economy law last year. In its carbon neutrality scenarios unveiled last month, meanwhile, hydrogen is given more weight than renewables. What is the Korean government doing to boost the hydrogen economy, and why? Yi hyun Kang investigates. 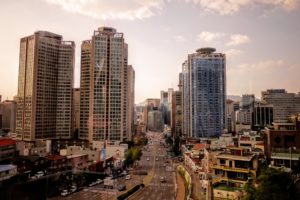 Committed to the hydrogen economy

The Korean Government has actively promoted the hydrogen economy since the mid-2000s. In 2005, the government announced its master plan for realizing an environmental-friendly hydrogen economy, although the plans were put on ice for almost a decade because of changes in domestic politics and the global oil market. Since President Moon Jae-in was inaugurated in 2017, the government has reactivated its drive for hydrogen, appointing it as one of the three strategic investment fields for innovative growth and drawing up a roadmap for the hydrogen economy.

The Economic Promotion and Safety Control of Hydrogen Act passed in January 2020 was the first hydrogen economy law in the world. It is intended to facilitate the use of hydrogen by implementing a transparent pricing system, compulsory installation of charging stations and obligatory periodic safety checks for hydrogen equipment.

There are many subsidies available for hydrogen fuel cell cars in Korea. In Seoul, for example, nearly a half of the purchase price is subsidized and tax, toll and park fees are reduced for hydrogen vehicles.

The government’s strong push for hydrogen has visible consequences. For example, in 2020, Korea was the largest market for hydrogen vehicles in the world. Furthermore, the country has the highest number of hydrogen charging stations (36), followed by Japan (24) and Germany (7). A business council called the Korea H2 Business Summit was officially launched on 8 September, led by 15 big corporations including Hyundai Motor, SK Group and Posco. This council aims to promote the hydrogen economy by collaborating on production, financing, and export of hydrogen technology and commodities.

Hydrogen is not only regarded as a new engine for economic growth but also a key tool to achieving carbon neutrality.

About a month ago, the Presidential Committee on Carbon Neutrality unveiled three scenarios for reducing carbon emissions by 2050. In all the scenarios, hydrogen has a bigger role than renewables. It is projected that 27.5-29.2 Mt of hydrogen per year would be needed for power generation, heavy industry, transport and Carbon Capture Utilization (CCU).

The Committee explained that the significant difference between the scenarios is the rate of electric vehicles (EVs) and hydrogen mobility. The most ambitious scenario (which is the only scenario that meets carbon neutrality) includes transitioning all supplied hydrogen into green hydrogen. It also considers increasing the market share of EVs at least to 80% and that of hydrogen-fuel-cell cars to 17% within the transportation system. The share of EVs and hydrogen-fuel-cell cars is currently about 0.8% and 0.06%, respectively. The other two scenarios include producing hydrogen through extraction from natural gas and increasing the share of EVs and hydrogen cars up to 76% in total.

These scenarios are currently under discussion within the government ministries and a public consultation is underway. The final official scenario for the carbon-neutral pathway will be announced by the end of October.

But why does the government so aggressively promote the hydrogen economy?

Hydrogen gained attention in Korea for the first time in the 2000s when oil prices escalated. Such interest subsided as oil prices stabilized and the government changed. Ten years later, however, the newly elected President Moon’s government declared hydrogen an attractive alternative to nuclear energy which has currently nearly 30% share in Korea’s energy mix. Moon’s government also had to deal with fine dust pollution, which was the most concerning social issue when he was inaugurated. While the deployment of renewables had not shown significant progress and triggered controversies, the government has elevated hydrogen to the forefront of its energy transition plan. Sub-national governments compete to hydrogen infrastructure to be paid for by the central government.

Some point out the close relationship between the government and conglomerates in Korea. Hyundai Motor, the country’s leading automobile company, has made a significant investment in hydrogen fuel cell cars over many years. It currently has the largest share of the global hydrogen vehicle market. Therefore, the government’s ambition in achieving the hydrogen economy is suspected to be part of back-scratching policy. Such suspicions are fed by the long-standing cooperation between governmental elites and highly concentrated ‘chaebol’ groups (family-controlled large conglomerates, including Samsung and Hyundai).

Can hydrogen economy be really low-carbon?

The main criticism against the hydrogen economy is that not all hydrogen is ‘green’. Hydrogen extraction from conventional natural gas emits more greenhouse gases than when directly using natural gas as fuel, even with CCS. While the current hydrogen fuel cell cars operating in Korea use grey hydrogen, some experts are skeptical about meeting the demand for hydrogen only with grey hydrogen when the number of hydrogen cars increases in the future. Because carbon emissions from grey hydrogen are unavoidable, the carbon neutrality scenarios suggested by the Presidential Committee consider that 13.6 million tons of greenhouse gas emissions are expected every year as a result of hydrogen production.

Is Korea becoming a pioneer of the global low carbon hydrogen economy, or is it simply striding down the wrong path? The uncertainty of the future makes it hard to answer.