Environmental disasters and global warming severely threaten global biodiversity. Few wild places can boast diverse ecosystems that are largely intact. One such area – Kavango Zambezi Transfontier Conservation Area (KAZA) – is being threatened by plans by the oil and gas industry. Andy Gheorghiu reports on the fight to prevent oil and gas extraction in Southern Africa that is threatening our planet’s largest nature protection zone. 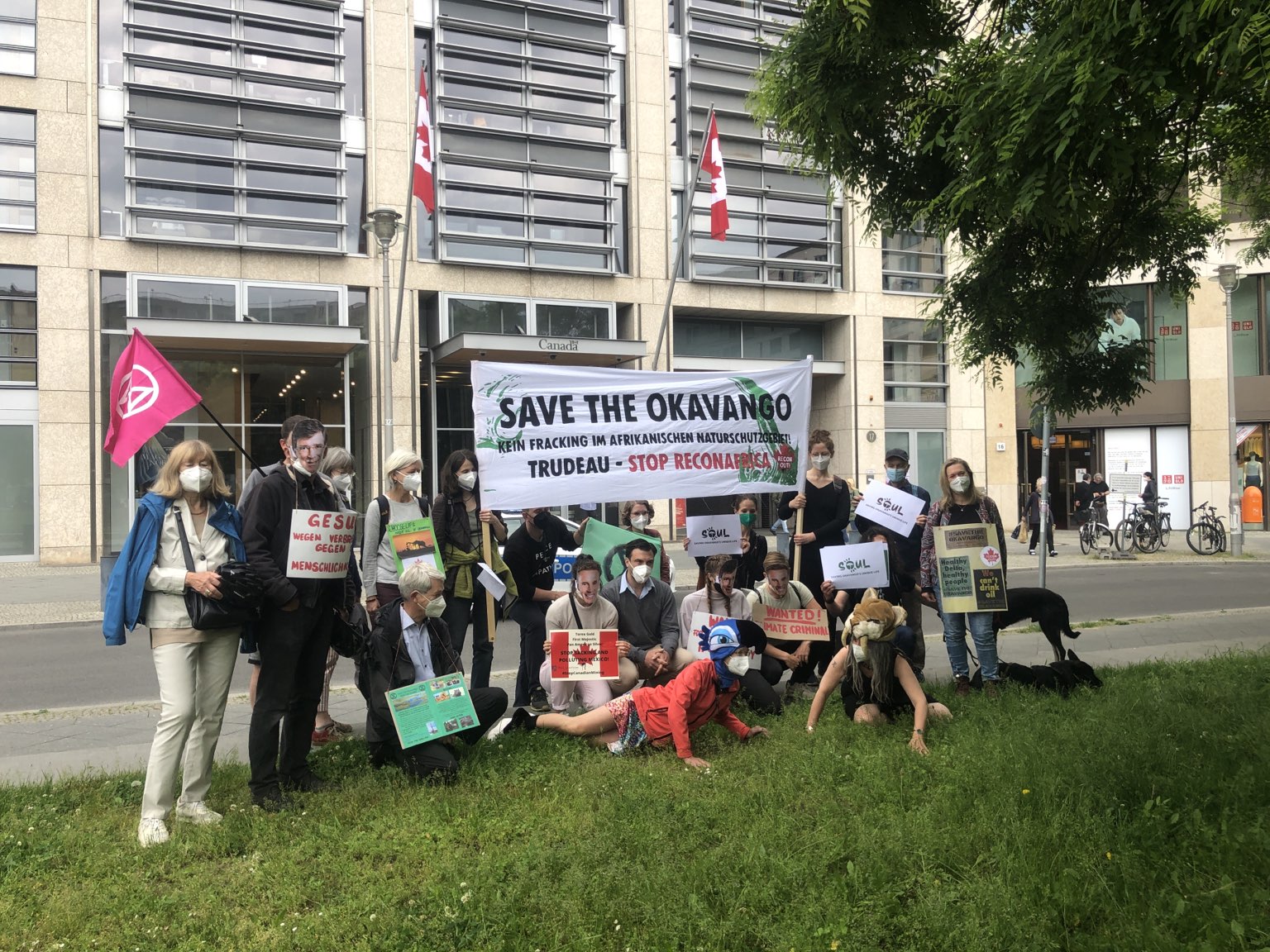 Protests against the planned drills in front of the Canadian Embassy in Berlin. (© Photo by Andy Gheorghiu, SOUL, 2021)

The Kavango Zambezi Transfrontier Conservation Area (KAZA), is a rare place. It is the world’s largest trans-boundary conservation area, extending over 520,000 square km – the size of France and the UK combined – and covering five countries, Angola, Botswana, Namibia, Zambia and Zimbabwe.

A planned fossil fuel extraction project in KAZA is now threatening a unique ecosystem, the UNESCO World Heritage site Okavango Delta as well as the livelihood of indigenous people living in the area. ReconAfrica, a Canadian company, was granted licenses by the governments of Namibia and Botswana, giving them approximately 35,000 km2 or 8.5 million acres, to explore for oil and gas in the so-called Kavango Basin.

The company has begun exploratory drilling in Namibia and aims to do seismic surveys for additional drilling. The petroleum agreements with Namibia and Botswana give ReconAfrica the exclusive right to obtain a 25-year production license.

Before local and national opposition unfolded ReconAfrica was clear about their plans to exploit mainly the presumed shale reserves – which can only be extracted via the environmentally destructive fracking technique. In its July 2020 report, the company also pointed out that its fracking operations require large amounts of fresh water – a requirement that will very likely lead to conflicts over access to water in an already very dry region.

The cumulative climate impacts of an envisaged production period of at least 25 years and the large-scale industrialization pose big environmental risks. In addition, on both current exploration sites ReconAfrica has an unlined pit to store highly toxic waste water and has started the drilling operations without required permits for water consumption and the disposal of wastewater – as confirmed by Namibia’s Minister for Agriculture, Water and Land Reform in March 2021.  Furthermore, Recon   also seized land without holding a proper land-lease license. A farmer at their second drilling site has filed a lawsuit and is currently tacking ReconAfrica to the High Court for land grabbing.

On December 21, 2020, UNESCO announced that it is keeping an eye on the impacts of oil and gas exploration in Namibia and Botswana on the Tsodilo and Okavango Delta World Heritage properties. On January 5, 2021, Botswana and ReconAfrica announced that the exploration license will be amended to exclude the Tsodilo Hills area, an UNESCO World Heritage Site sacred to the indigenous San people.

This turn of events shows that the influence and involvement of UNESCO is crucial. However, ReconAfrica moves nonetheless forward with exploration activities in Namibia and this has prompted UNESCO to adopt the following decision during the extended 44th session of the World Heritage Committee that took place in July 2021:

“… Expresses concern about the granting of oil exploration licenses in environmentally sensitive areas within the Okavango river basin in northwestern Botswana and northeastern Namibia that could result in potential negative impact on the property in case of spills or pollution;

Urges the States Parties of Botswana and Namibia to ensure that potential further steps to develop the oil project, which include the use of new exploration techniques, are subject to rigorous and critical prior review, including through Environmental Impact Assessment (EIA) that corresponds to international standards, including an assessment of social impacts and a review of potential impacts on the World Heritage property”.

However, instead of halting Recon’s activities,  the Ministry for the Environment and Tourism granted the firm an Environmental Clearance Certificate to conduct seismic surveys for further drilling. During a meeting with Craig Steinke, co-founder of ReconAfrica, in August 2021 Namibia’s President Hage Geingob hailed the company as a potential job creator for the Kavango East region.

The need for actual action to protect the Okavango from oil and gas exploitation  during the World Congress of the International Union for Conservation of Nature (IUCN) that took place in September 2021 in Marseille. IUCN’s motion 136 highlights the human and indigenous rights aspects of the case, raises the climate change urgency and refers to UNESCO’s request calling on Namibian and Botswana to conduct a proper EIA “prior to any further exploration and any future development of oil and gas resources and other extractive activities in and/or affecting the Okavango River basin and its people.”

The German state-owned bank KfW is the main sponsor of the world’s largest nature conservation area KAZA. But it surprisingly has not joined the chorus of criticism of Recon’s oil and gas drilling plans. Although the KfW points out to the IUCN motion and UNESCO’s decision, the development bank still does “not see the measures of German development cooperation in the field of environmental protection and natural resources in Namibia and the KAZA region endangered by the exploratory drilling”.

German civil society, however, has been more vocal. A petition initiated in April 2021 collected over 120,000 signatories within a few weeks, calling on the German government to stand up against the oil and gas drilling plans and to support a transboundary strategic environmental impact assessment. But the German Ministry for Economic Cooperation has remained silent on the issue, turning a deaf ear to the strong international and national opposition to Recon’s plans.

But the complaints by civil society, both nationally and internationally, is making it hard for ReconAfrica to move forward as smoothly as they’ve intended. The broad opposition already forced them to cut the Tsodillo Hills area out of the Botswanan license and the company had to ask for a one year extension for the exploration activities in Namibia – although the company officially blames the pandemic for the delay.

In July 2021 a petition , signed by over 50 Namibian civil society groups and supported by over 70 international groups, was delivered to the Secretariat of the Namibian National Assembly. It calls on the Namibian Government to suspend all oil and gas drilling and establish an independent and impartial Public Commission of Inquiry to critically examine the current and future oil and gas exploration and extraction in the Kavango East and West regions.

Then, in September, NGOs from Canada and the US submitted a request to the Toronto Venture Exchange (TSX-V) to investigate potential misrepresentations in the disclosures and public communications of ReconAfrica regarding its operations in Namibia.

And ReconAfrica is well aware that the world is watching. As opposition grows, the writing is on the wall: the era of large-scale fossil fuel extraction is over. The future of economic prosperity of countries like Namibia and Botswana lies in the the huge potential of renewable energy as well as sustainable ecotourism, agriculture and forestry programs.