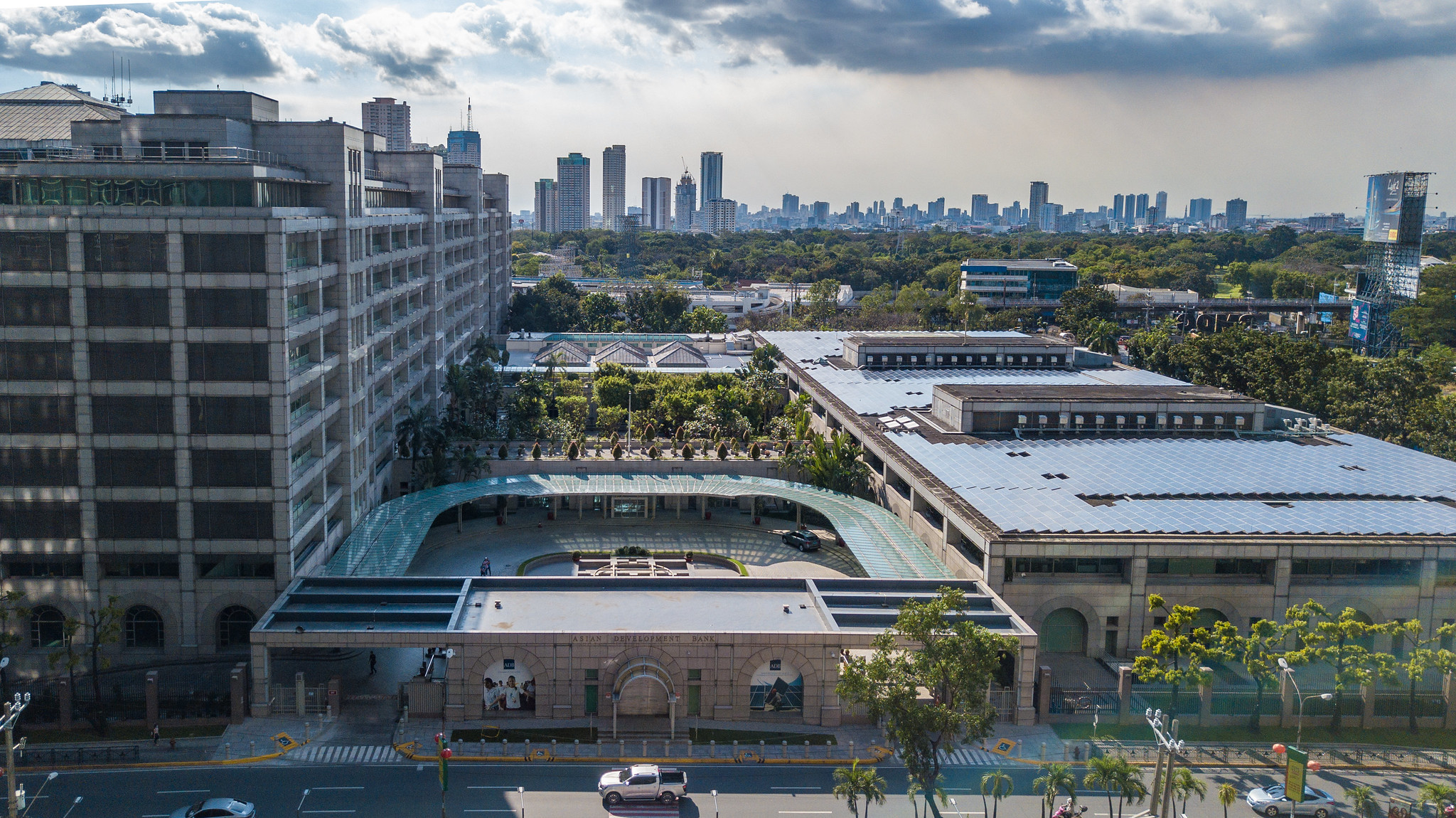 In May, the Asian Development Bank (ADB) published the draft of its new energy policy, a big step, given its clout over energy systems in Asia and the Pacific. The document pledges a new era in the multilateral bank’s financing approach. But despite major improvements on coal, there remains a long way to go. Maria Pastukhova looks at the small print.

The shift in ABD’s approach to financing is a major development for the future of energy systems in Asia and the Pacific, as the ADB is arguably one of the most influential development banks, both given its size and the traditional focus on the energy sector. It is the third-largest multilateral development bank (MDB) after the European Investment Bank and the World Bank Group’s International Bank for Reconstruction and Development, and the largest among regional MDBs with the annual disbursement of $16.4 billion in 2019. Energy is the second largest sector of ADB financing after transport, with $42.5 billion being  approved in 2009–2019. The bank’s largest recipients are countries whose energy transformation will, to a large extent, determine the success of the global decarbonization efforts: India, Pakistan, China, Indonesia, and Bangladesh.

The “update” is long overdue, as the previous version of the policy dates back to 2009. It has been long criticized by think tanks and civil society groups for failing to reflect the needs of the recipient countries and the developments on the global energy markets.

Paperwork catches up with reality: coal

The most significant shift in ADB’s approach to energy supply is contained in §86 of the draft, which announces the end of all financing of coal-mining, oil and natural gas field exploration, drilling or extraction activities. This is a significant and a timely milestone, the need for which has been highlighted by the IEA’s new net-zero report. On coal, the ADB’s stance goes beyond upstream and clearly cuts any support, including new coal-fired power and heat generation or any kind of retrofitting of the existing facilities that could prolong their economic lifetime.

This de-jure ban on coal, though groundbreaking, does not reflect a sudden change of mind. Though coal financing is part of the ADB’s energy portfolio under the still active 2009 energy policy, the last funding was granted in 2013, for the Jamshoro supercritical coal-fired power plant in Pakistan.

Nevertheless, the explicit positioning of the bank on coal is an important step and a clear message to the recipient countries, whose power systems are amongst the most coal-dependent worldwide. New is also ADB’s commitment to support the developing member countries in their coal phase-out efforts through assistance in planning for early retirement of coal power plants and site redevelopment for new economic activity.

While a step forward, the draft suggests there will be practically no change in renewable-energy funding under the new energy policy. Fossil fuels retained the second-largest share in the ADB’s energy portfolio (18%, see Figure) for the period 2009-2019, with renewables ranked at place four (13%). This picture is unlikely to change under the new energy policy, unless further curbs are made on fossil fuel investments. 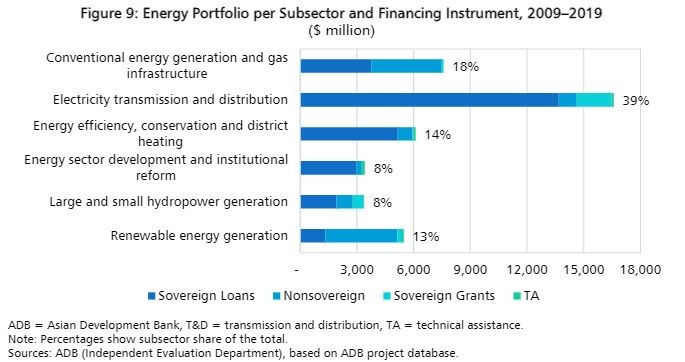 The announced ban on funding of upstream fossil fuels sounds like progress but is in fact largely a reconfirmation of ADB’s usual practice. In reality, no extraction or mining projects have been funded over the last decade, and the “conventional energy generation and gas infrastructure” subsector consists, with exception of a couple of minor diesel projects, exclusively of gas generation, transmission and distribution infrastructure. With gas still remaining a “transition fuel” in the new energy policy’s draft, this basically means that the policy shift from fossil upstream doesn’t necessarily mean any shift in finance towards renewables.

The new policy draft includes a clause on “strict evaluation criteria” to be used when choosing between gas projects and renewable alternatives. While the detailed criteria are to be developed separately, the basic criterion for comparison will be the total cost of the projects. Gas projects will include “social cost of carbon” (SCC) – a measure developed to estimate the economic damage that would result from emitting one ton of carbon dioxide into the atmosphere.

But here, the policy stumbles: the proposed baseline SCC is $36.8 (2016 dollars) per tCO2, with 2% annual increase rate. Though the estimates regarding what SCC should be vary, the baseline value chosen by the ADB is significantly lower than the current average estimates (ca. $50 per tCO2) – or even than the current values adopted by oil and gas majors (BP, Shell – $40, Exxon – $80). Until higher SCC is being adopted, it remains an inefficient policy tool, with funding likely to be diverted to gas projects in cases where an economically more viable renewable-based alternative is available.

Another pitfall is the failure of the ADB to address one more uncomfortable truth regarding investments in conventional energy, notably gas, with due diligence: methane, which accounts for 17.3% of global GhG emissions and has a global warming potential 84 to 87 times higher than CO2 over a 20 years’ timeframe. In its current version, the ADB’s new energy policy might support the region in its transition to a low(er)-carbon economy, but not to one aligned with the goals of the Paris Agreement.

While stricter screening criteria might help towards a level-playing field for renewables, they don’t replace a clear timeline for phasing out fossil fuel finance. As the IEA’s net-zero report as well as earlier scenarios suggest, fossil gas has a limited role on pathways to net-zero and cannot be considered a transition fuel in most sectors, most notably power. ADB must therefore include a phase-down, ideally a phase-out timeline in its draft.

Aside from the direct investments in energy supply, ADB’s new energy policy offers an extensive set of assistance options to support and quicken the energy systems transformation in the recipient countries. These include support of the institutional development, policy reforms, regional energy cooperation, technical advice, capacity building and financing, as well as the gender equality.

Focus on this non-infrastructural part is crucial to enable a sustainable energy transition in Asia and the Pacific, as the lack of an appropriate regulatory framework and trained staff are among the main obstacles to rapid decarbonization of the ADB’s recipient countries’ economies. The only problem, however, is that until now ADB’s work on governance and institutional reform has proven the least successful among all its activity sectors (46% success rate). The problem is partly inherent to this type of assistance, as it is sensitive to government ownership, frequently resulting in lack of interest from executing agencies or long implementation delays. On the other hand, the ADB must develop a more proactive approach to its engagement with DMCs and strengthen its position as a regional partner of trust, leveraging possible political conflicts within and between its member countries.

Despite its many positive elements, the ADB’s new energy policy draft remains an unfinished product. Hopefully it will continue to be improved upon, as changes still can be made until October 2021, when the draft will be submitted to the Board for approval. Here further steps are needed, and soon. Given the significance of the ADB’s role in the region, its energy systems transformation will not happen fast enough if undergone via half-measures.