The German government has proposed making trams and buses in selected cities free in order to reduce pollution. The healthiest thing about the idea is the debate it has created. Craig Morris adds an idea of his own.

Remember Dieselgate? (Cars in the EU are not as clean as claimed.) The EU is leaning hard on Germany to clean up the air in cities. Making these cars comply with current emission limits seems impossible – if not technically, then politically; it would cost German carmakers a fortune.

So the Social Democrats (SPD) tossed in a completely unexpected idea during the coalition negotiations in mid-February: make public transportation free. The informal proposal immediately met with criticism on practical grounds: current infrastructure could not withstand an onslaught of so many people at once, and it would take many years to expand services. 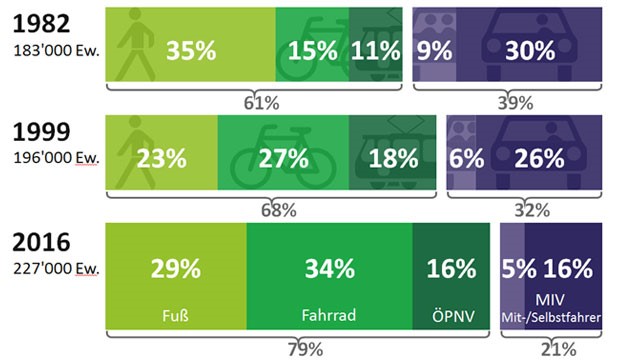 The evolution of trips in Freiburg, Germany, by transport mode. From left to right: walking, cycling, public transport, cars with a driver and passenger, and cars with only a driver. Car use has fallen from 39% to 21% in those 34 years, but public transport has actually fallen in the 17 years up to 2016. Cycling has grown the most but cannot be combined with local public transport; bicycles cannot be taken on buses or trams in Freiburg. The population is shown on the left. Source: City of Freiburg.

But the debate remains in the headlines, and we’re learning a lot. For instance, municipal transport companies would lose an estimated 10 billion euros in annual revenue, and that’s just the losses from ticket revenue; cities cross-subsidize public transport to the tune of, say, 71 million euros annually in the midsize city of Kassel alone. (In Berlin, ticket revenue reportedly only makes up just over half of total expenses.) Researchers estimate (in German) that the total cost of car traffic is three times more expensive than public transport. Those findings are not particularly new, but they would have remained underreported were it not for the current discussion.

Denmark does it better

The Danes have long known better. We can go beyond the external health costs from pollution and accidents: cycling lanes and sidewalks are cheaper and require far fewer repairs than do roads used by cars and trucks. There’s also comfort gains (revitalization of city centers) and tourism. Back in 2010, the Danish Cycling Embassy wrote (PDF): “When all these factors are added together the net social gain is DKK 1.22 (0.13 euros) per cycled kilometer. For purposes of comparison there is a net social loss of DKK 0.69 (0.09 euros) per kilometer driven by car.”

Denmark has had this discussion for a few decades; it may have just started in Germany this month.

There’s also criticism of the plan in principle: people sometimes take a service for granted if it is free. But lots of people would continue to drive cars. As the public discussion has revealed, public transport is faster and more convenient than driving for some, but not for all. And as more people switch to trams and buses, traffic jams will decrease, making driving more attractive.

The federal government paying cities to offer free public transportation may not be a good idea anyway. Cities will resist having local decision-making taken away from them. And a proper plan would involve holistic infrastructure development, which local city councils do best.

We want to reduce car use, not just increase public transportation

So here’s another idea: why not give people who sell their cars a transport credit? At present, a 4,000 euro bonus is offered, for instance, for purchases of electric vehicles. Give people who sell their car they’ve owned for at least two years the same amount as a credit towards any other mode of transport. An annual ticket for public transport in Berlin starts at 761 euros, so you could have around five years for free from that bonus. Or you could buy a new bicycle and still have money left over for a few years of trams and buses. Long-distance trains could also be covered, including the annual pass for 4,270 euros. You’re also going to do a lot of walking now, so there must be a few pairs of shoes you’ll be needing – seriously.

This transition would allow everyone to do what’s best for themselves. Public transport would probably see a bump in usage but would also have time to adjust – and cities would retain decision-making about ticket prices and infrastructure plans. Some people would also keep driving.

In my next post, I focus on a few ideas from other cities around the world. Many of the examples are taken from reader comments in the German discussion. People are learning not just from journalists, but also from each other.