Here’s a question: how big is the entire power plant fleet in your country compared to the fleet of vehicles? Craig Morris investigated the matter for Germany. Before you read on, take a guess: which one is bigger?

Two out of three cars would disappear from this picture if we switched to car-sharing (Photo by De-okin, edited, CC BY-SA 3.0)

Germany’s private car fleet is some 40 times bigger than its entire conventional power fleet: 4,300 GW vs. 107 GW. And while these power plants run at around half of their rated capacity over the year, cars are only used on average an hour a day – and their motors are vastly overpowered for the tasks they generally perform. 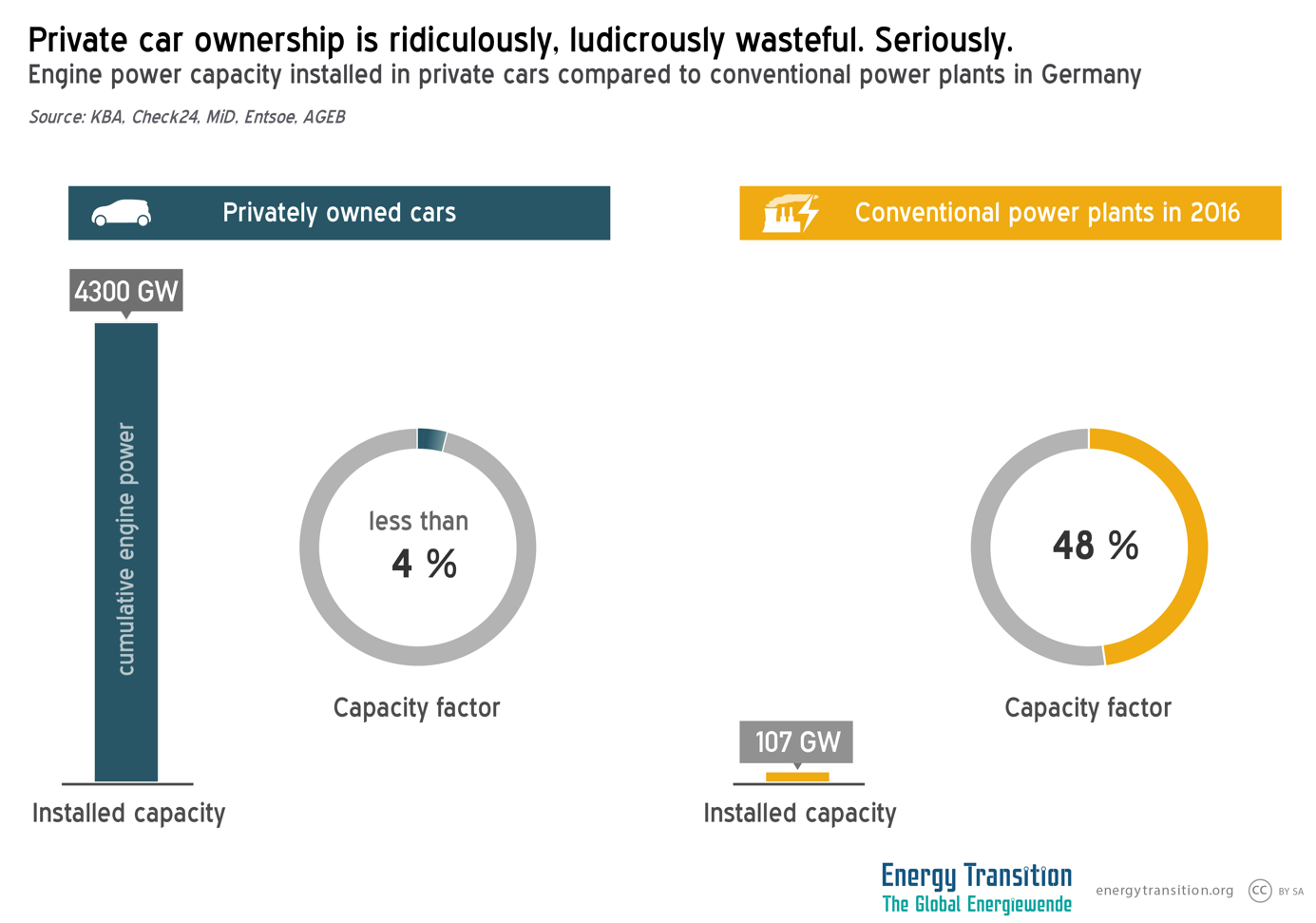 A capacity factor (CF) reflects how much energy a unit produces relative to how much it could if running full-blast. The German power plant fleet runs at around half capacity (48%), and that number is even dropping because wind and solar are offsetting conventional power faster than plants close. Critics of renewables say this trend is wasteful, but less fossil and nuclear power is the goal of the Energiewende, not some unintended, undesirable outcome.

If you want to criticize wastefulness, private car ownership is clearly a low-hanging fruit. Private cars are currently only used for around one hour a day. And they have vastly oversized engines; the average in Germany is around 128 horsepower (in German). We use a small fraction of that capacity to creep through our cities at an average of 30 km/h.

People don’t buy cars for everyday purposes. They buy them for outlying needs. We thus choose big engines, say, to haul heavy stuff even if we rarely do so. Families buy station wagons (as I, ahem, know from personal experience…) for those bimonthly family trips with luggage, but then the cars are used on a daily basis for something else: driving one parent to work alone.

Admittedly, comparing cars and power plants is a classic case of apples and oranges. Cars are power plants aren’t even used for the same thing; no one is suggesting that private cars running on diesel or gasoline should be used to generate electricity. On the other hand, the CF of these cars is much lower than the 4% shown above – that’s just the one hour a day those cars are used. But even then, those engines are not running at full capacity; people rarely put the pedal to the metal. In reality, the capacity factor of privately owned cars is probably below one percent. It’s ludicrous.

So what’s the answer?

Lots of my readers are probably thinking, Craig, I can’t do without my car. I get that. Not everyone has good public transport, and in places like Berlin (a pretty car-friendly city, if you ask me) taking a car can be more convenient than taking a bus or tram.

Private car ownership is the main problem. A recent study by Germany’s Environmental Agency (UBA) found that German cities could do away with two thirds of cars if the entire fleet were shared. That change along would bring the fleet’s collective motor size down to 1,400 GW, “only” some 14 times greater than the current conventional power fleet in Germany. And everyone would ideally be able to pick the car they need for each trip, so we could downsize lots of motors, improving efficiency even further. (That’s the problem with Tesla’s “ludicrous mode” (video): the cars still have oversized engines. But at least we can agree it’s ludicrous.)

If the shared car fleet were also electric, even greater advances would be possible. We’d no longer be comparing apples and oranges: these cars would be connected to power plants. They would eventually run on excess wind and solar power (which Germany doesn’t yet have), and while stationary (so most of the time) shared EVs could help stabilize the grid by providing ancillary services.

By switching to a fleet of shared electric cars, we could increase our resource efficiency massively, even as we provide solar and wind space to grow further. We would also dramatically reduce the number of cars clogging up our streets. I’m not talking about traffic jams, but the excessive number of cars parked on our streets 23 hours a day.

Increasingly, Germans are becoming aware of the free ride we give privately owned cars. I close this article with a wonderful video (unfortunately, only in German) from Deutsche Welle. The narrator is taking back her street so it can be used by people. She argues that everyone pays for free parking spaces through taxes, so everyone should get to use them, not just car owners. So shared fleets of EVs it is!