In the US, a debate on “deep decarbonization” is raging: going nearly zero-carbon in energy supply. Journalist David Roberts says we will need “dispatchable” nuclear. Via Twitter, he told readers that, to refute his argument, people need to move beyond their anti-nuke rant and show that we won’t need “dispatchable nuclear.” Craig Morris has a different take: Roberts needs to define “dispatchable.”

At Vox.com, journalist David Roberts recently published a piece entitled “Is 100% renewable energy realistic? Here’s what we know” relying on two assessments of 100% renewable scenarios. Both of which were written by (non-German) proponents of nuclear. As I showed in a previous post, that wasn’t all we know – English speakers are ignoring the biggest studies from Denmark and Germany.

5. If you don't like this conclusion, the way to refute it is not w/ generic anti-nuke rants about current costs, current tech, etc.

Another thing is also overlooked: France. 100% is hard to do, as the French learned with nuclear. In 1974, they adopted their Messmer Plan for an all-electric, all-nuclear energy supply. It was a technocratic decision without any democratic input.

It failed. Though nuclear advocates point to France as a shining example, the country currently gets only two fifths of its energy from nuclear, far below the 100% envisioned by 2000.

One wonders what kind of electric mobility the French wanted back then. There seem to have been no grand schemes for Renault and Peugeot to make only electric cars – or for the French to forego cars altogether. Whatever the case, electric mobility seems more likely today; and yet, France is not revisiting its old plans (nuclear proponents should help us understand why). On the contrary, it has capped total nuclear capacity at 63 GW and will close its oldest reactors if / when then next one – an EPR – goes online.

The French wanted to get heat from nuclear power, but that didn’t work either. Demand for space heat from electricity already doubles demand for electricity. It peaked above 100 GW in 2012, more than 50% above the maximum output of the entire nuclear fleet.

France could have installed lots more nuclear to meet that demand; the Messmer Plan would have had three times more reactors by 2000. But the French essentially stopped adding reactors where the maximum output reached minimum power demand. The goal seems to have been avoiding the need to ramp reactor output up and down (that, at least, worked). If France had to meet that peak demand for heat with nuclear, French reactors would need to cut capacity utilization in half for most of the year, thereby roughly doubling the cost. 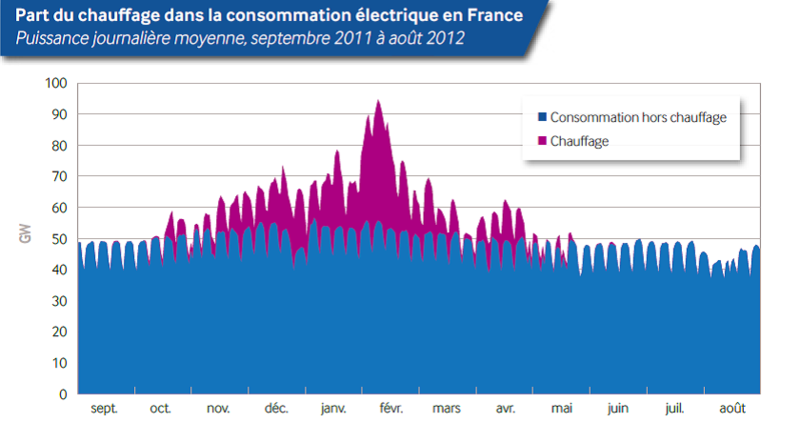 Electric heaters in France are found in a fifth of homes but double demand for power. Magenta area: power for heat. Blue area: all other electricity. Source: RTE.

In the power sector, nuclear makes up 75% of French supply. Clearly, France shows that nuclear can play a major role towards decarbonization. Today, the country could build twice as many reactors to cover peak heat demand and three times as many – in line with the original Messmer Plan – as everyone switches to EVs. Why France isn’t doing this is anyone’s guess. Roberts himself says he doesn’t want to talk about the problems with today’s nuclear fleet (such as microfissures requiring cooling water to be preheated so that faulty containment vessels don’t burst, one of which is now patched up with lime mortar), though he nonetheless wants to “keep {them} open as long as possible.”

The big challenge is societal, not technical

France may hesitate to go 100% nuclear because, in fact, only 20% of French homes have electric heat, so even tripling the nuclear fleet wouldn’t get us all the way. We need to renovate our buildings to the Passive House standard so that far less heat (and air-conditioning) is needed. When I am asked whether I think we will be 100% renewable in 2050, I always say no – we could, but we won’t because whenever I look out the window, I see unrenovated buildings everywhere. We are 33 years away from 2050, so any building renovated or constructed soon, but not to be completely carbon-free, will hold us back from being zero-carbon.

The real challenge to approaching 100% is thus not technical (not storage, grid stability, and other issues that engineers focus on), but societal: getting people today to renovate/build for a carbon-free 2050 even when there is no mid-term, much less short-term, financial payback (given low oil prices).

But let’s return to the dispatchability of nuclear. If France tripled its nuclear fleet, these reactors would have to ramp down every day. I described the actual flexibility of the French and German nuclear fleets here. Suffice it to say the reactors do react, just not the way needed for a 100% nuclear/wind/solar mix, which therefore cannot work.

Nuclear proponents say that reactors could ramp more (or be retrofitted to do so) but don’t because they provide the cheapest electricity based on low fuel prices; once you have built a reactor, you might as well leave it running all the time. This is true. Building a reactor is prohibitively expensive; the fuel rods, not so much.

However, this reading overlooks the limited flexibility of existing nuclear plants, which the World Nuclear Association sums up nicely. Note that reactors are less flexible just before and after refueling. The French nuclear fleet is commonly held to be the most flexible for load-following in the world, with Germany mentioned in second place (oddly, because German nuclear moves the least of all power sources). But notice the ending of this sentence from the OECD and the Nuclear Energy Agency (PDF): “Although some French and German NPPs are flexible and operate in the load-following mode, this is not a general case.”

Importantly, the world’s existing nuclear fleet ramps the least compared to coal and gas, as an OECD/NEA paper from 2012 shows (PDF): 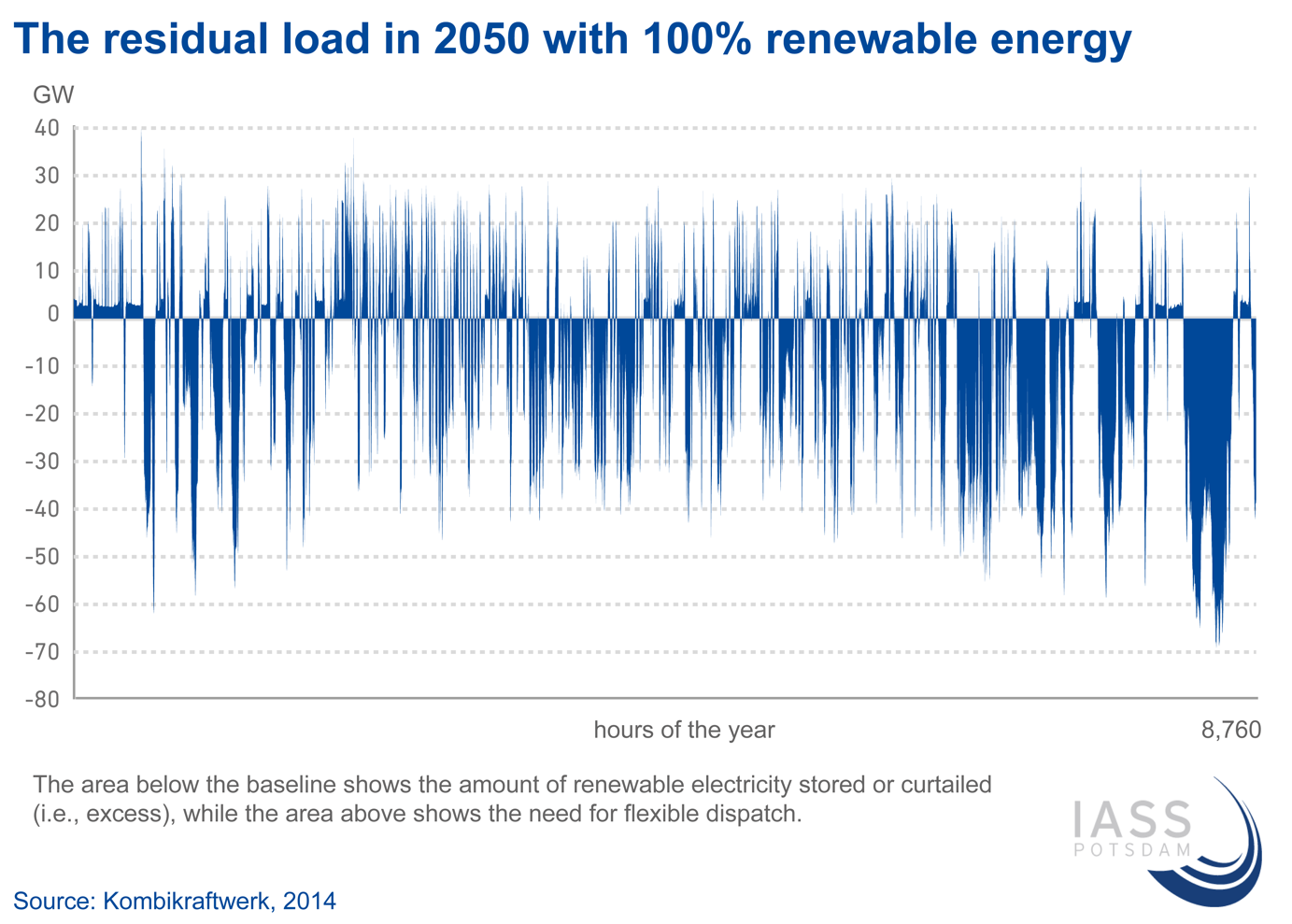 The ramping French nuclear reactor shown here may look like it would be able to follow the residual load needed in 2050 for wind and solar, but in fact that reactor only ramps from 90% to 30% of its rated output. Current made-to-ramp reactors are designed to only have 400 cold starts (down to 0% and back up) in their entire lifetime – around once a month over forty years (including refueling downtime). They might not last two years in the chart above.

It’s quite possible that nuclear with wind & solar is cheaper in the mid-term, but eventually wind and solar peaks will hit the must-run capacity of nuclear, and then storage is needed. Storage will make everything much more expensive. So German researchers have argued for years that all inflexibility has to be removed if wind and solar are at the center of power supply.

Both the Danish and German scenarios for 100% renewable energy/power, respectively, discussed here include biomass, locally sourced from waste to the extent possible. They call into question what Roberts calls (and the French called) “electrify everything” – the assumption that a 100% renewable energy supply will entail 100% electric mobility and heat. There simply is a certain amount of sustainable biomass available (such as from waste) for use as fuel, so not everything needs to be electrified.

Strangely, Americans in particular seem afraid to talk about biomass, perhaps because some nuclear proponents there like to misrepresent all biomass as pristine American forests. Not surprisingly, the main scenario for a 100% renewable America has no biomass at all in it. Acting as though no sustainable biomass exists is purely ideological, not based on any science.

My first conclusion is that our current nuclear fleet is incompatible with fluctuating wind and spikey solar. You can focus on nuclear if you want, but the more of it you have, the less space there is for wind and solar.

Second, mere dispatchability is irrelevant. If you want near 100% zero-carbon energy with wind and solar, you want backup that can shut down and ramp up from a cold start every day. Nuclear is worse at this than coal, gas, biomass, and hydro. Any future reactor designs will need to ramp like gas turbines to back up wind and solar.

Third, it’s worth adding that cost estimates for 2050 are like reading tea leaves. We have no idea, for instance, what fossil fuels will cost in 33 years, and recent estimates suggest that even modest sales of electric vehicles might bring oil prices down. It is prudent, however, to expect the cost of wind, solar and various storage options to drop. The cost of new nuclear is unclear; the price of power from the planned Hinkley addition is indexed to inflation, so it will rise, and small modular reactors do not yet exist. But heck, even the price of existing nuclear is disputed: “Nobody knows the total cost for nuclear energy,” French President Macron said this year. “I was minister for industry, and I could not tell you.”

In conclusion, we don’t need to answer Roberts’ question about whether there is a better “dispatchable” source of zero-carbon power than nuclear. Rather, we need to dispel the notion that “dispatchable” alone will suffice. You can try deep decarbonization based mostly on nuclear and look to the French model (which France is abandoning) to improve upon. Or you can follow Denmark and Germany with renewables – largely wind and solar, but you can’t leave out biomass.

Personally, I’d love to see an experiment based mainly on nuclear. In return, if you want nuclear, you will love to see the Energiewende play out. Let’s meet in 2050 and compare who performed better! I bet anyone a beer, it’s renewables – any takers?