This week, German media reported a different angle on the “micro-fissures” now plaguing nuclear reactors in Europe. It seems that the risks have been known for decades. Craig Morris takes a look.

At present, around the third of France’s nuclear fleet is currently off-line as safety experts inspect small cracks in containment vessels. Earlier this year, we learned that improper manufacturing led to these micro-fissures way back in the 1960s—and insiders knew about the problem all along.

The issue flared up in the 2012, when micro-fissures were first (re-)discovered in Belgian reactors, allegedly because of the use of modern inspection technology. But then, a Belgian newspaper pointed out (report in German and in Dutch) that the cracks at these plants had been visible, as it reported at the time, to the naked eye in 1979, when the reactors were not yet even in operation: “In the meantime, there is no doubt that we are talking about cracks,” one politician stated in the Belgian Senate, according to a report from 29 December 1979. (In his defense, the current director of the Belgian Nuclear Control Agency, who oversaw construction of the reactor in question, says he “cannot remember” the discussion.)

Now, Süddeutsche Zeitung (in German) and WDR (see this video in German) reported that nuclear plant operators have not only known about the issue, but have even been compensating for it for decades. At 18 reactors from Belgium to the Czech Republic, France, Finland and Slovakia, the emergency cooling water is preheated to as much as 60°C. As the table below shows, the practice began in Belgium, Finland, Slovakia, and the Czech Republic in the early 1990s. 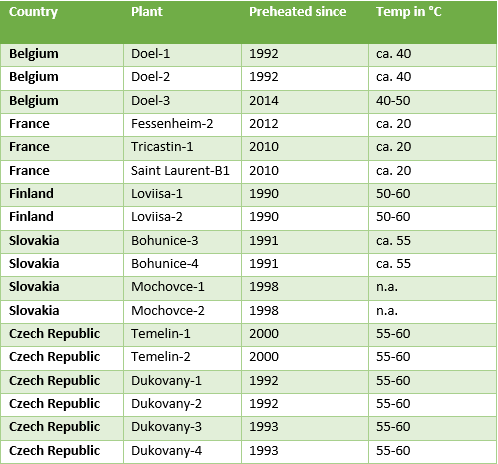 The problem is that cold cooling water, which generally has a temperature of 5 to 10 °C in Europe, could cause thermal stress on the reactor wall if it is introduced quickly. If the wall already has fissures, the result could be a material failure leading to a leak. If enough of the cooling water escapes through that leak, a meltdown could be the result. In return, however, a higher cooling water temperature also reduces the cooling effect.

Not all of the reactor operators interpret the preheating of emergency cooling water as an indication of an underlying safety issue, however. A spokesperson for Czech utility CEZ told WDR, “That is not a security measure but rather the result of constant improvements,” with the goal of reducing the impact of any use of emergency cooling water “on the service life of the reactor’s containment vessel.” But not all of the companies responded to the press’s requests for statements.

For what it’s worth, the German reporters were unable to discover any such practice in Germany, and the German Environmental Ministry (which handles nuclear safety) stated that emergency cooling water was not preheated at any reactor in Germany “because of the [containment vessels’] current and expected material condition at the end of their service lives,” ending no later than 2022. (In other words, we are shutting them down anyway, so we don’t need to worry about longevity.) However, Wolfgang Renneberg, head of reactor safety at the German Environmental Ministry up to 2009, says the practice is “common in Russia and the US” as well—it simply is not reported.

As Michael Sailer, head of Germany’s Nuclear Waste Management Commission, told the reporters, the steel reactor wall is constantly bombarded with neutrons, becoming brittle in the process—even without any cracks that have been there from the beginning. These containment vessels, properly manufactured (no cracks), were designed to last for 40 years. The average age of a European nuclear reactor is now 32 years. “We are increasingly approaching the material’s limits,” Sailer warns.