The Poles have limited power imports from Germany in order to reduce “loop flows” through the country. Now, grid experts at the European Network of Transmission System Operators (Entso-e) warn that the country may no longer have generation and power import capacity to meet demand. By Craig Morris. 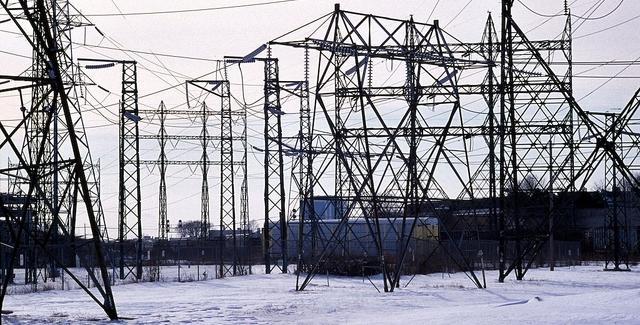 Poland has set up phase shifters to limit the amount of electricity coming from Germany. (Photo by the_riel_thing, modified, CC BY-NC-ND 2.0)

We first reported on the loop flow situation back in 2013; loop flows occur when electricity takes a different path than the one scheduled because power lines are full. In the case of Germany, they occur when electricity from the north cannot reach the south. It then flows through neighboring countries to the east and west. Generally, the problem is reported as pertaining to excess wind power production, as was recently stated in an article at Politico entitled “German winds make central Europe shiver.”

Germany’s neighbor Poland has set up phase shifters to limit the amount of electricity coming from Germany. Now, it seems that this policy might come back to haunt them. In its Winter Supply Outlook, Entso-e finds that “adequacy in Poland was identified as potentially at risk.” The potential shortfall already started in the summer, when Poland had to tell its industry to reduce consumption from August 10-12. At the time, the power line from Sweden was already maxed out, and the lines from Germany were also congested with “high unscheduled flows.” Strangely, during those days, the amount of wind power was minimal, and the amount of solar was unremarkable at no more than around 20 GW. 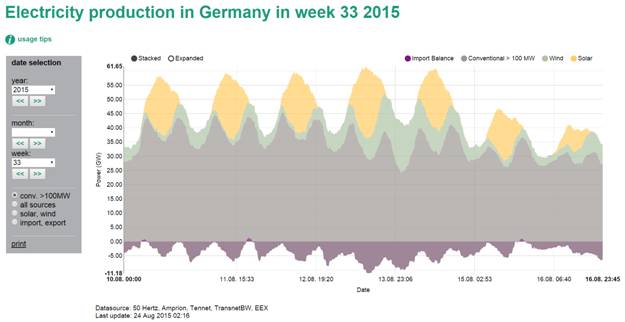 Nonetheless, Entso-e says that “the amount of energy required to limit these flows was seven times higher” from June to September 2015 than during those months in 2014 – and 78 times higher than in 2013. The grid experts say that the result could eventually be a major blackout.

The situation will be relatively tense if Poland runs out of cooling water for thermal power plants (coal), for instance when rivers freeze over during a severe cold spell. The power shortfall this summer occurred for similar reasons, when rivers dried up during a heat wave. The potential shortfall is shown in the following graphic; where the red bars reach below the blue area, there is a theoretical possibility of a power shortfall in this scenario (the numbers at the bottom refer to weeks).

In contrast, for Germany the grid experts speak of “massive oversupply” potential around Christmas. The following chart shows how different the situation is in Germany (for which Entso-e does not provide the same visualization of “peak time” as in Poland).

The bars indicate that Germany will have positive remaining generation capacity along with just over 20 GW of import capacity. What the chart obliquely indicates is that Germany is highly likely to be a major power exporter during these weeks; a large share of remaining capacity translates into low generation prices relative to other countries.

Tucked away in the report is a piece of interesting good news for wind power: “In week 36, we experienced for the first time that the transmission system was driven without a single central power plant” in eastern Denmark. Strangely, that was a week of very high wind power production in Denmark and in northern Germany, but there seem to be no reports of unusually high loop flows through Poland.

In the end, I’m left with more questions than answers. If wind power is really the problem, why are the specific times indicated by Entso-e not of high wind power production? Are they trying to suggest diplomatically that the reasons Poland gives for the loop flows (which certainly are happening) are not the true causes? And in light of Poland’s ongoing power shortfall, why is the country limiting power flows rather than expanding them to a country that obviously has excess capacity at times of peak demand?