Germany aims to reduce its energy consumption by 50 percent by 2050 relative to 2005. It sounds like a fanciful target, especially if the country continues to grow economically. But in reality, Craig Morris says, there are two simple steps to this goal, which do not seem so magical once you know them. 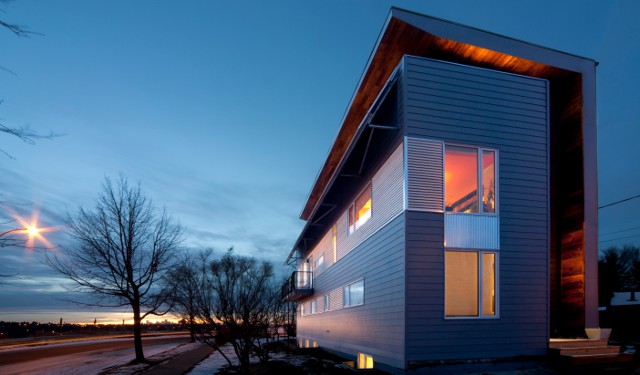 Technical solutions like passive house designs are available, but there is a lack of political courage to tackle untapped efficiency potential in the heating and transport sector. (Photo by Green Energy Futures, CC BY-NC-SA 2.0)

Not so fast – 2013 was a pretty cold year, and 2014 was the hottest year on record in Germany (going back to the 1880s – before that, no records were taken). So the first lesson is not to focus too much on minor upticks from one year to another. After all, energy consumption was down across Europe last year because of the good weather.

When people think of greater efficiency, they usually imagine high-tech applications – the switch, say, from our old lamps to modern LEDs. These things exist. When I moved to Germany in the early 1990s, my bedroom lamp consumed up to 300 watts. Now, I use less than that in the evening with all of the living room LEDs on and a 45-inch TV screen playing videos from a computer. But the great advances to come in energy efficiency are not things that still need to be invented. The biggest two are already here: cogeneration plants and Passive House architecture.

Let’s do a back-of-the-envelope calculation. Germany uses roughly 30 percent of its energy as fuel for transportation. Another 50 percent is consumed for heat. Only 20 percent is electricity (note that countries with air-conditioning have a larger share of electricity, such as 40 percent in the US).

Passive House architecture can reduce demand for space heating in buildings by a whopping 90 percent. This type of architecture has been refined for more than 20 years and no longer even costs significantly more than standard architecture. In 2021, the EU Buildings Directive more or less requires the Passive House Standards (“nearly-zero-energy buildings”) for all new builds, and it applies for new governmental buildings across the European Union starting in 2019.

Granted, most buildings need to be renovated, not built anew. And Passive House is not possible in all retrofits. Nonetheless, energy demand can generally be reduced by nearly 90 percent in renovation projects as well. So space heating need not be a major energy consumer by mid-century.

Lots of heat will still be needed for industry (it’s called “process heat”), however. This is where cogeneration comes in. As I discussed in my recent review of the 1985 Energiewende book, large central power plants have efficiencies of around 40 percent because the rest is waste heat that goes up the cooling tower unused. When bite-size amounts of that heat can be recovered from small, distributed power plants (cogeneration units), demand for process heat can be addressed. So Passive House reduces demand for heat dramatically, and cogeneration covers a lot of the remaining demand with waste heat from the power sector. And both of these things already exist.

The one magic thing that still has to happen is the electrification of the transport sector. There are myriad options here, which we need not explore in detail now. Suffice it to say that progress is being made with batteries, renewable fuels should cover at least a niche, and modal combinations are possible (people switching from trains and trams to electric cars to electric bicycles as need be on a single trip). Currently, there is concern that the lack of a standard infrastructure for, say, charging stations poses an obstacle, but multiple, competing infrastructures (charging stations, battery swaps, etc.) could just as easily increase people’s options in switching transport modes.

Most importantly, electrification will significantly increase the efficiency of transportation because internal combustion engines have a miserable efficiency of around 20 percent, compared to 80 or 90 percent for electric motors.

Aviation remains an obstacle, of course, and we just may need a little magic there. Ditto for shipping, where electrification won’t help much. The dirty secret is that emissions from shipping are generally not even reported; the EU hopes to include ships using EU ports starting in 2018. No magic required here, just political will.

And that’s what scares me. Passive House will be three decades old when nearly-zero-energy homes become mandatory next decade, and there still are no requirements for renovations. Furthermore, a shift from large central plants to district cogeneration will be another nail in the coffin of the largest power providers, and this option has also been on the table for decades. But divesting from conventional energy companies poses a challenge to entities from municipal governments to pension funds. Efficiency does not require very many additional breakthroughs. We need more willpower than magic.