The results of the survey published in German in February were made available in English (PDF) last month. They show overwhelming international skepticism towards the German Energiewende. Craig Morris says the findings are in line with the WEC’s tradition of skepticism towards renewables. And a comparison of previous WEC surveys on the Energiewende is illustrative.

If Germany managed to start an energy transition despite its mediocre natural conditions, so can countries like Brazil or China at lower cost today. (Photo by Carla Wosniak, CC BY 2.0)

The survey started by asking whether decision-makers “accurately notice and observe” German energy policy. 60 percent of the participants said yes. Yet, nowhere does the survey test that hypothesis by asking specific questions to see whether the participants themselves understand the Energiewende.

43 percent said Germany will reach its carbon reduction target by 2020 even though all signs indicate that Germany will miss it. Aside from government officials, most experts in Germany doubt the country will reach its 2020 targets unless drastic action is taken now. The government recently proposed a new climate package, but it has not yet been adopted. (Remember that Germany missed its 2005 target, but then overshot its 2012 Kyoto target.)

And there are other strange findings in the survey. Of the 35 people surveyed (20 from Europe, 15 from outside), none said that the German plan of phasing out existing nuclear plants was good. Yet, the survey included someone from Switzerland, a country that resolved to shut down its nuclear plants by 2034 only two months after Fukushima happened. The survey did not, however, include anyone from Belgium, which resolved shut down its nuclear plants by 2025 only seven months after Fukushima. Respondents from Italy and Austria also took part in the survey, but their countries had already adopted a nuclear phase-out long ago (follow the previous link above for details).

The participants may have confused the concept of a nuclear phase-out with Chancellor Merkel’s shutdown of eight of the country’s 17 nuclear plants within a week of Fukushima, an action I called incompetent and irresponsible at the time. Here, we see the shortcomings of the WEC survey – does this question refer to the general concept of a nuclear phase-out or the particular German incarnation in the spring of 2011? And did one survey participant understand it one way and someone else another?

Another finding seems simpler than it actually is. For instance, zero percent of those surveyed say that the “entire concept of German energy policy” could be copied one-to-one in their country. What sounds like total rejection is, however, nothing new. Does any government official say another country’s policy for anything should be copied without accommodating any domestic aspects? Why even ask that question? When it was asked in 2012 (PDF in German), the response was the same, and it will be the same every time – no one believes a policy from one foreign country can (or should) be reproduced exactly by another.

Other questions are leading. The survey asked participants whether their country “possesses the ability to implement German energy policies.” In fact, Germany is one of the least able to implement its own policies. The country has some of the worst solar and wind conditions in the world – and practically no hydro, geothermal, or other renewable potential. Just take a look at the chart for wind power below. The cost goes up the left Y axis, but I want to focus on the X axis at the bottom showing the “capacity factor,” which basically expresses how often the wind blows strong enough for a turbine to generate electricity. Brazil and China have phenomenal capacity factors in the 40s and apparently even above 50 percent. See those big blue circles on the left? They are labeled “Europe,” but that’s primarily Germany. Nationwide, the capacity factor of the German wind turbine fleet is around 18 percent (PDF), barely half the average in the chart below – and a third of the best wind sites. In other words, a wind turbine installed in Germany will produce half as much electricity as one elsewhere and only a third as much as in the best sites. The electricity in those other places will then cost only half or a third as much as in Germany. 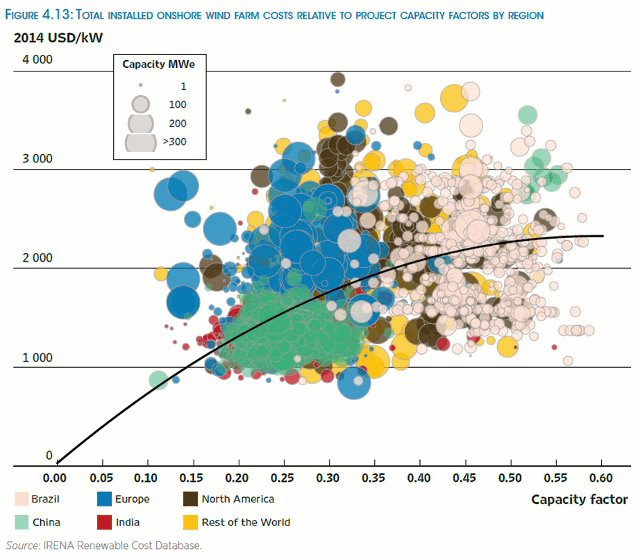 Cherish these figures for a moment: at the end of 2014, Germany had 39 GW of wind turbines installed, compared to only 23 GW in Spain. Yet, the Spanish produce more wind power than the Germans.

The same holds true for solar. Dubai recently made headlines for achieving six US cents per kilowatt-hour with a new solar array. But Dubai has twice as much solar radiation, so its solar power should cost half as much as in Germany. Yet, Germany pays less than 12 cents for all new arrays. In other words, Dubai has just reached the level of cost efficiency Germany already had. But because the number in Dubai is lower, Dubai’s success looks much better. The confusion is understandable for the general public, but those who took part in the WEC survey are energy sector experts.

For both wind and solar, the lesson is not that the Energiewende is expensive or that copying it will be expensive elsewhere. Rather, an energy transition will be cheaper everywhere than it is in Germany.

The survey also asks whether heavy industry and private households “would accept higher electricity prices” – as though higher prices are some kind of forgone conclusion (59 percent of the respondents felt that industry would not accept higher prices, while 53 percent felt that households would not). In reality, the market is currently driving solar and wind growth because they have become so competitive based on price – just take a look at these two charts comparing the growth of nuclear power and wind power in China and India (and note that we are comparing actual power production, not generation capacity).

Finally, no country that transitions to renewables now will have Germany’s cost level because half of the German level stems from the years of expensive photovoltaics, which are over.

The World Energy Council survey suggests that, in fact, its own members do not understand the Energiewende all that well. Furthermore, the WEC conducts the study regularly, but they do not assess trends from year to year. Last year (PDF in German), only 33 percent of those surveyed felt that the Energiewende would have long-term economic benefits. This year, it’s 54 percent. 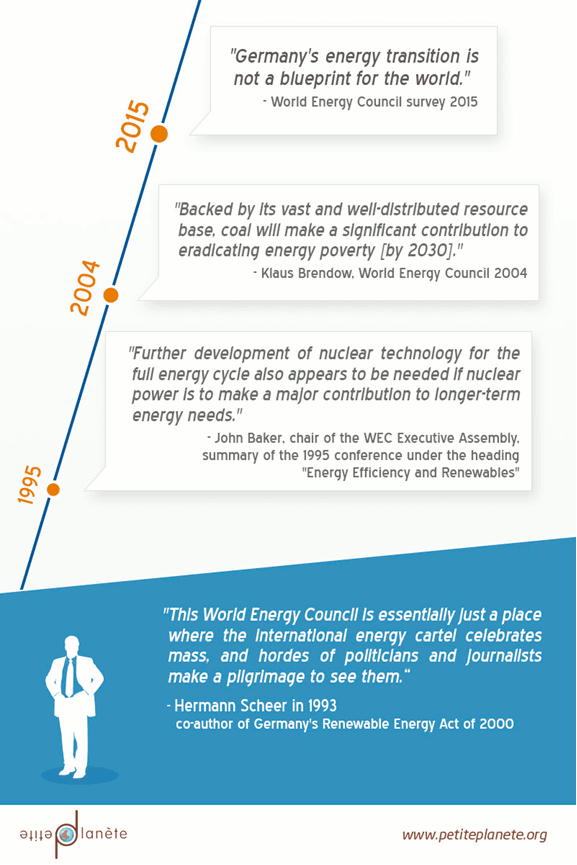 Craig Morris (@PPchef) is the lead author of German Energy Transition. He directs Petite Planète and writes every workday for Renewables International. Hat tip to Thomas Gerke (@Zoido4Design) for research.