On October 15, Germany announced the renewable surcharge for 2014, which is roughly 1 cent higher per kilowatt-hour than in 2013. Craig Morris says there are signs that an end to higher prices is near. And you don’t have to take his word for it.

Slowing down – energy price increases for consumers in Germany could come to a halt soon. (Photo by Alexander Franke)

First, let’s take a look at a chart from German renewables organization BEE showing the composition of the surcharge over the past few years. 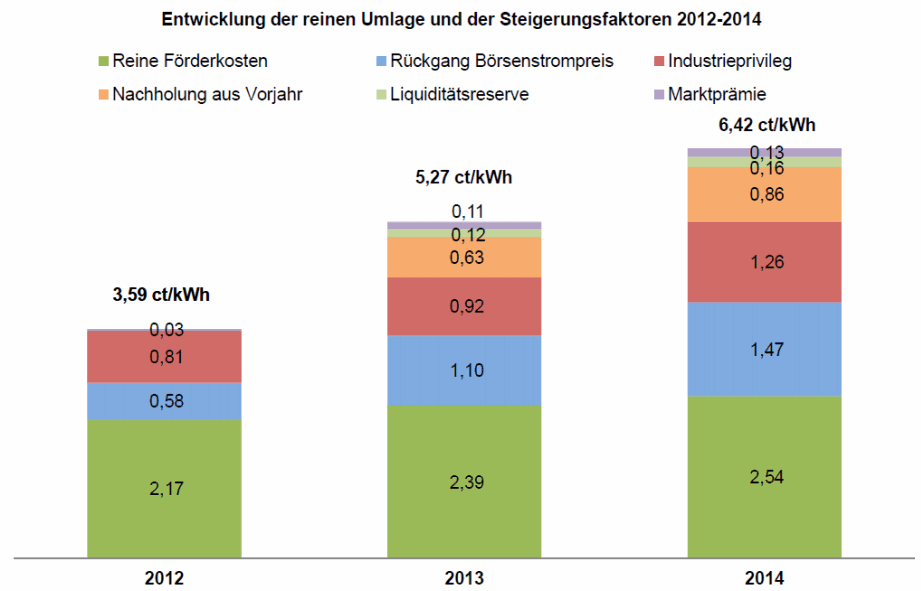 Only the green area at the bottom represents the actual cost of feed-in tariffs, and as you can see the figure continues to rise, though it is slowing down. But the biggest jumps by far have been in the blue area representing lower wholesale prices and the red area representing industry exemptions. The red area jumped by 0.34 cents, compared to 0.37 cents in the blue area – and only 0.17 cents in the green area.

Renewable power paid for with feed-in tariffs is sold on the exchange, and the difference between wholesale rates and feed-in tariffs is passed on in the surcharge. The average “green” kilowatt-hour now costs around 12.1 cents according to German industry association BDEW and will continue to fall, but wholesale prices are now also below four cents on the spot market.

It is worth noting that photovoltaics, which already costs only 0.10-0.14 euros per kilowatt-hour for new systems (and falling rapidly) only made up 0.08 cents of that amount. And as the PV market continues to cool down (still at a record level internationally, however), that cost impact will drastically increase as soon as the next surcharge for 2015.

Clearly, system costs are now the biggest challenge, not feed-in tariffs themselves. We have already dealt with industry exemptions (explaining that Brussels will deal with them if Germany does not), so let’s focus on wholesale prices, which are indeed falling as a direct result of the surge in renewable power. Solar in particular has wiped out almost all demand for expensive peak power plants, which are now only needed in winter evenings.

Going forwards, Germany needs to move beyond adjusting feed-in tariffs and look for ways to keep overall supply costs in check. Addressing the winter gap will be crucial; solar cannot offset demand for peak power in winter evenings, and while wind power can, it is not dispatchable. The elephant in the room is whether Germany will take less expensive domestic brown coal or more environmentally friendly imported natural gas to fill that gap during the transition over the next two decades.

Finally, we need to understand that the surcharge itself does not matter to consumers – retail rates do. Falling wholesale prices can outstrip the rising surcharge to stabilize, if not bring down, retail rates. Germany’s fourth biggest utility has already said it will not be raising prices for “most” consumers next year, and the country’s biggest utility has now said that prices could top off in 2015.

If so, Germany would be sitting on the second highest retail rates in Europe (after Denmark), but it would watch its power rates remain stable while they rise in neighboring countries.