The European Union (EU) is currently setting out its climate and energy policy framework for 2030. Whether the EU should commit to binding targets for emissions reduction, renewables and energy efficiency, and how ambitious such targets should be, is hotly debated in Brussels. Scenario modeling and statistics are supposed to inform politicians with sound research-based guidance for their decision making. However, it seems that these information sources are often biased in line with the interests of powerful lobby groups thus putting at stake future EU competitiveness, the delivery of the EU climate and energy security and the transformation into a low-carbon economy, find Silvia Brugger and Luca Bergamaschi.

Between dedicated domestic policies and actively thwarting European progress: Angela Merkel and her allies play a double game with the energy transition. (Photo by EPP, CC BY 2.0)

“Renewables are expensive and the reason for high energy costs. In times of crisis we cannot afford current renewable energy support schemes and have to focus on growth and competitiveness. Therefore, we have to slow down our ambition, be pragmatic and roll back what is left from the once famous European Climate Leadership.” In short, this is the narrative pushed by influential stakeholders across Europe in order to protect business models that are threatened by the energy transition. The lobby group BusinessEurope demands a phase out of renewables support and European utilities (including EON, RWE and Vattenfall) recently called in a joint effort for an end to subsidies for wind and solar. While creating new electricity markets and reforming the internal energy market will be vital to the EU to protect consumers, industry and EU competitiveness from rising energy prices, existing calls from powerful interest groups are unhelpful to effectively cope with three fundamental challenges – climate change, affordability and security of supply.

As it has been reported by the German newspaper Süddeutsche Zeitung, the EU Energy Commissioner Günther Oettinger censored the numbers of indirect social and health costs, nuclear and fossil fuel subsidies in a recently leaked draft document. The document, due for release in the upcoming days, should provide policy recommendations on support schemes for renewables, state intervention in energy investment, energy storage and demand-side management. According to the Commission’s own figures, electricity from nuclear and fossil fuels benefit from overall €100 billion of public money while subsidies for renewables amount to €30 billion per year (see graph below, from CAN Europe). These estimates, which were removed from the latest draft, show that claims that subsidies for renewables are the main cause for rising energy prices are misleading. They also disregard the impact of rising fossil fuel prices – over the past 10 years the oil price has risen from $25 a barrel in 2002 to $110 in 2012 – and omit to note that in the last decade power generation, distributions costs and rising profits have critically contributed to the increase in electricity prices. 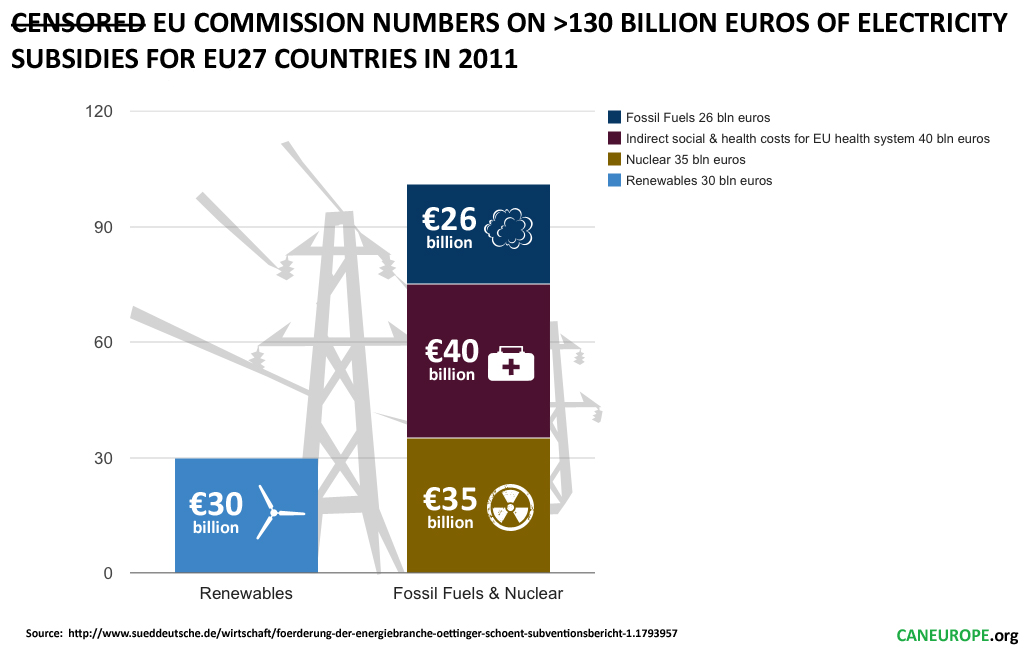 DIW Berlin, one of the leading economic research institutions in Germany, compared recent cost estimates of different renewable energy technologies with the European Commission assumptions. The analysis shows that the Green Paper on 2030 energy and climate policies and the Energy Roadmap 2050 are based on outdated scenarios. This might lead to a significant risk of underestimating the cost of conventional generation, transport, and storage, while the costs of renewables risk being overestimated. The DIW researchers urgently call on the EU Commission to change their forecasts according to recent developments and to provide updated model calculations.

The European Commission needs to ensure that all forms of electricity generation face a level-playing field. This requires a fair evaluation of the current subsidy regime. While aggregating and quantifying all subsidies for a specific purpose is a complex matter, the European Commission should increase efforts to provide as accurate information as possible. All Member States should therefore require to coherently publishing where consumers’ money is spent on. A higher degree of transparency is needed to keep Member States accountable for their expenditures, to avoid unbalanced and misleading judgements towards low-carbon support schemes, and that additional mechanisms are introduced to encourage investment in low-carbon emitting plants through a comprehensive reform of the internal electricity market that addresses key design questions.

In the light of this evidence, it seems that the EU’s energy savings potential are yet not fully captured and are systematically underestimated in the current modelling which will inform the 2030 climate and energy policy decisions. According to rumours in Brussels German industries are engaged in an endless fight to persuade the European Commission’s energy department to deliberately downplay the energy savings potential of the transport, energy production and industry sectors. This shows how national interests play a key role in influencing Brussels decision making processes.

The German government has played an almost schizophrenic role in EU climate and energy debates. The Energiewende with its move towards the age of renewables and energy efficiency is not questioned by any major political party in Germany. But while a high carbon price would be in the national interest for a successful Energiewende, the German government did not manage to adopt a unified position on stabilizing the carbon price by “backloading” allowances from the EU’s emission trading scheme. The suspicion that Chancellor Merkel acts on behalf of powerful industrial interest groups is fuelled by the heavy – and ultimately successful – lobbying of her government to block a sealed deal on EU car emissions. As it turned out recently, her party, the CDU, has received significant donations by the majority shareholders of BMW just after the elections – a link between these two circumstances is likely even if not proven. German car manufacturers and energy intensives are known for their double-tongued approach to climate policy. Whilst presenting themselves as “green” protagonist at the home front, they are committing significant resources to undermine any ambitious positions the German government might espouse in Brussels. The chief lobbyist of the German car industry, Matthias Wissmann, wrote a letter to “dear Angela” earlier this year explaining that tighter emissions restrictions would put 60% of jobs in the German car industry at risk.

There is an urgent need to look beyond vested interests and enable politicians to make decisions on the basis of transparent and comprehensible scenarios. All analysis shows that as countries decarbonise their power sector, a continued rise in the use of renewable energy technology is needed. A continued flow of investment – €35-45 billion per annum – is needed to deliver the 2020 EU renewable targets. During a period of high political and economic uncertainty, investors require high confidence that the policy is designed in a way to support long-term investment in low-carbon generation. Therefore, ambitious and binding targets for emissions reduction, renewables and energy efficiency should be part of the 2030 EU energy and climate legislation.

The debate on the costs of support for renewables risks to slow or block the transformational change required to respond to the climate challenge if considered in isolation to the overarching goal of delivering long-term climate, energy and resource security. Climate change and resource scarcity are already impacting EU productivity and competitiveness through increasing cost for businesses and consumers as well as increasing investment risks. For example, Europe has seen its fossil fuel import bill rise by €200 billion since 2010 due to rising market prices and global demand. These trends will likely increase due to increasing exploration and extraction costs for unconventional resources as well as increasing demand from emerging economies. Delivering a successful and competitive low-carbon transformation will require a combination of government support to steer investments into low-carbon generation as well as enough market openness to deliver technological and business model innovation.

The narrative pushed by influential stakeholders is fundamentally disconnected from the EU’s commitment to a low-carbon economy. The new German coalition government should not only make the Energiewende at home and in Europe a success but also – in its own interest – advocate in Brussels for an ambitious 2030 climate and energy package with binding targets for emissions reduction, renewables and energy efficiency.