Recently, our Craig Morris explained that German retail rates are poised to stabilize even if the renewables surcharge continues to rise slightly. Today, he points out why we cannot expect the cost impact of feed-in tariffs to go down until around 2030 – and why that is not such a big deal.

As the EEG guarantees payments for 20 years, today’s surcharge equal the cumulative costs of the past installments. (Photo by lichtkunst.73 / pixelio.de)

A lot of people both in Germany and abroad are wondering how the country can bring down its expenses for feed-in tariffs. The answer is quite simple: without retroactive cuts, you can’t. Spain and other countries have ruined their reputations as safe investment environments by changing rates for investments already made. German politicians will not repeat that mistake.

But first, let’s take a look at the cost situation. 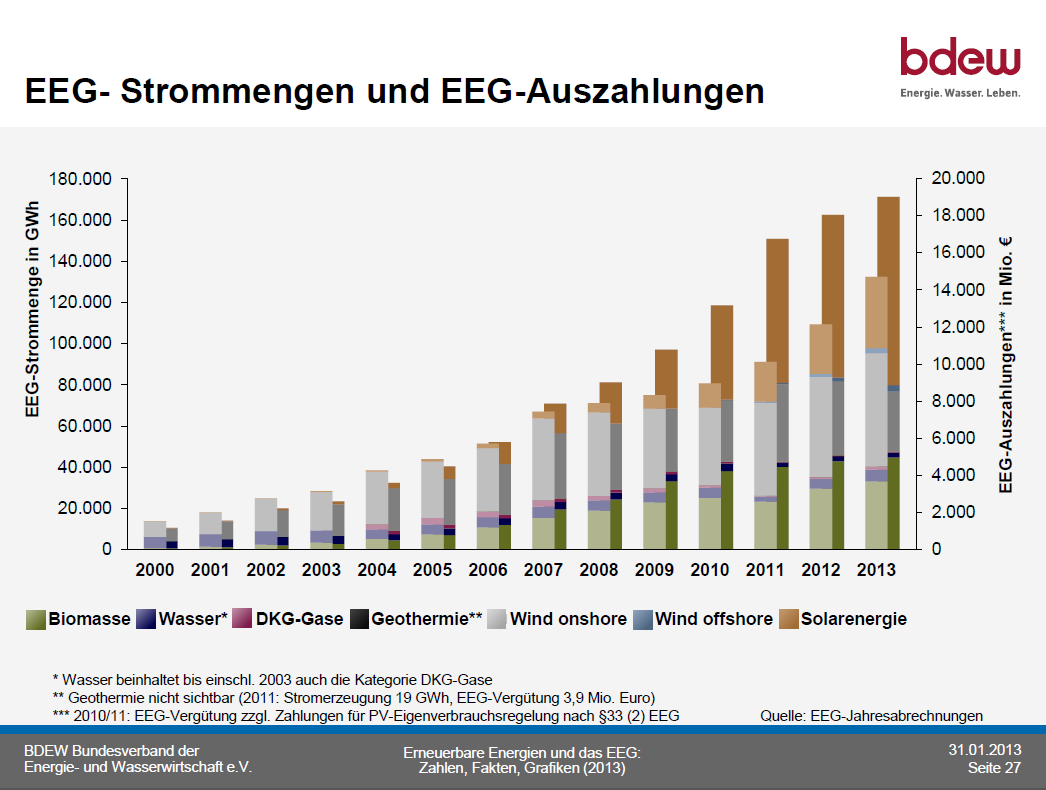 The bars in the foreground represent the amount of power measured along the left Y axis; the bars in the background, the cost measured along the right y-axis. Up until around 2005, wind power made up a growing share of both power and cost, but in 2004 feed-in tariffs were expanded to include photovoltaics. They were quite high at the time (around 0.50 euros per kilowatt-hour, compared to 0.10-0.14 for systems installed today), so PV immediately began to have a major cost impact far beyond its contribution to power supply. By 2013, photovoltaics made up around a quarter of green power production in Germany but closer to half of the cost.

In 2010 Germany installed some 7.5 GW of PV (remember, the Spanish market crashed in 2008 after installing only 2.4 GW) at still relatively high feed-in tariffs. Since then, however, the price of PV has plummeted, but because these old investments are protected for 20 years, German power consumers will carry this cost burden forwards until 2030.

By that time, however, PV will have become inexpensive to an extent we probably cannot even accurately estimate today, but for the sake of argument let’s just say that five cent solar could be replacing 50 cent solar in 2030.

Until then, German power consumers will have to rough it. Costs may not increase any further, but they will not go down. Germany is likely to remain the second most expensive country in terms of retail rates after Denmark for the foreseeable future, but even that may not matter much if German prices remain stable while other countries see their power prices increase.

Crucially, the cost impact of new renewables – especially PV – is negligible (see my last post), so we need not slow down installations to keep costs in check. Rather, Germany must increase the share of renewables in power supply by 1.5 percentage points per year if it is to reach its goal of 80 percent green power by 2050. To keep costs in check, we need to focus on overall power supply – including the indirect cost of renewables (grid costs, backup capacity, etc.).

Finally, we must make a crucial distinction between retail and industry prices. It is the former that are among the highest in Germany. German wholesale prices and prices for industry are becoming more competitive, not less.