From California to Greece, there are ever-more laws that mandate solar panels on roofs. In Europe, southern Germany is held back by a lack of trained electricians. Paul Hockenos reviews. 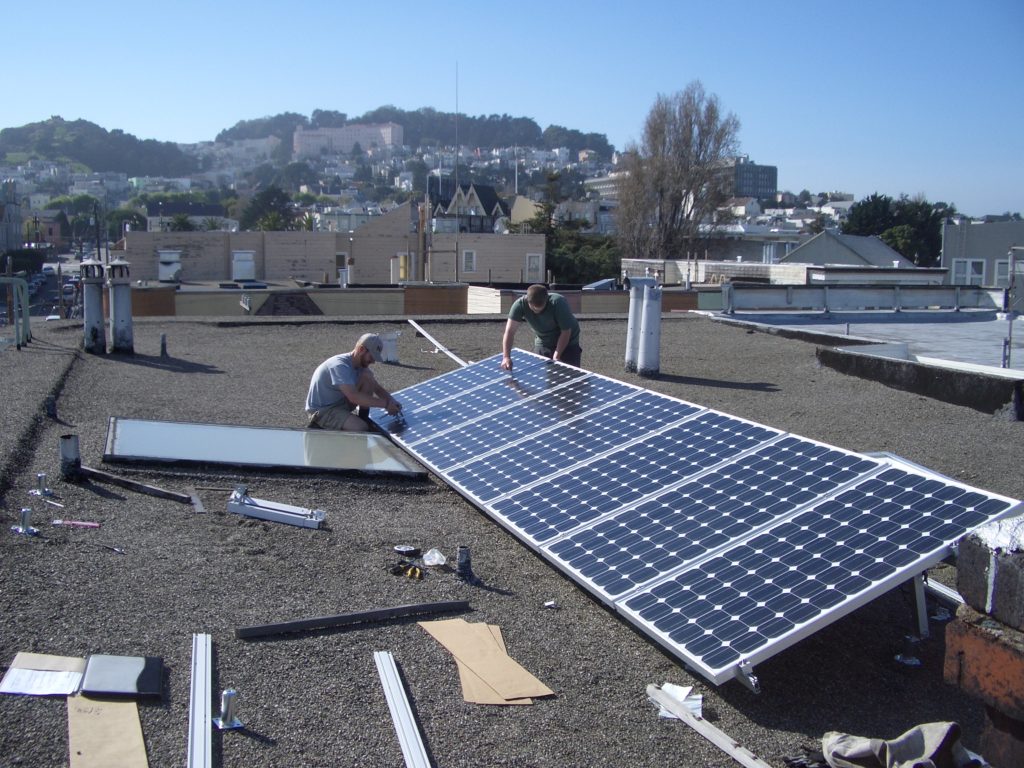 Across Europe and in the U.S. too, there are more and more new laws that oblige homeowners, businesses, and public buildings to mount solar energy systems on the uppermost reaches of their facilities. After all, the rooftop space is there for the using: Ireland’s University College Cork mapped 200,000 square kilometers of idle rooftop area worldwide. They calculated that these spaces, if mounted with solar units, could generate 27,000 trillion watt-hours a year – significantly more units of energy than the world currently expends. The greatest potential is in Asia, North America, and Europe, according to the report.

The benefits go beyond the generation of watt hours. Germany’s Öko-Institut, a think tank, argues that rooftop solar installations also offer advantages like avoiding additional land use  and opportunity for citizens to participate in the energy transition.

This massive rooftop potential is the background of the laws that oblige owners to equip their buildings with solar systems. California passed the first-ever housing rule requiring new homes to install solar panels, which went into effect in 2020. It included a range of incentives for owners of new homes and other buildings. A California-based NGO, Environmental Working Group, calls it “one of the most successful clean energy and climate policies ever adopted in the U.S.” The state’s policies prompted more than 1.3 million homes, small businesses, and other structures in California to invest in rooftop solar panels.

In 2023, California’s Solar Mandate will receive an update: all new construction, additions, repairs, and alterations to residential and commercial property must include a solar energy system to offset the electrical usage. Compliance is built into the law: builders have to meet these criteria to receive a building permit.

In Europe, about half of all 27 EU members states either have a mandate of some sort in place or one that is going into effect in the near future. At present, Belgium (Flanders), the Netherlands, and Switzerland oblige all existing buildings to have solar panels – photovoltaic or thermal – covering all or part of the roof. In seven countries, there’s a mandate on renovated buildings and in nine countries on new buildings.

In southern Germany, out in front is the state of Baden-Württemberg, which this year on January 1 instituted the first phase of its solar mandate: namely solar roofs on all new non-residential buildings. As of May, this includes all new buildings, including private houses. And as of 2023, it will also apply to all roofs undergoing renovation.

Just a glimpse of the opportunity: in Baden-Württemberg, while over three-quarters of roofs are suitable for solar, only 10 percent of them actually have panels.

Perhaps it’s too early to tell whether these laws are helping fuel the massive boom in solar photovoltaic expansion that that state – and indeed all of Germany – is currently experiencing. In the first half of 2022, Germany saw a 22 percent jump in the installation of solar systems over 2021 – and that’s all kinds of solar, including residential and commercial uses, from small installations on private rooftops to large solar parks.

The high price of energy and the 2012-elected government’s feed-in tariffs certainly contribute to the boom in Baden-Württemberg. But the mandate plays a role, too, according to Franz Pöter of the Solar Cluster Baden-Württemberg, an agency attached to the regional government. “There are no numbers yet on the extent that the mandate is responsible for this surge but I’m convinced it is,” says Pöter, who is in close communication with developers.

The German government has pledged that renewable sources will constitute 80 percent of electricity production by 2030. By 2035, Germany’s power supply should be carbon neutral. Yet today it stands at about 50 percent.

Yet, where’s a will – and mandates – there’s not always a way. Demand for solar installations in the state is so great that there’s a nine-month wait to have solar systems installed. The hold up, says Pöter, is due to supply chain disruptions and a shortage of installers. Germany as a whole lacks tens of thousands of electricians, a gap that is currently the primary obstacle to the Energiewende, according to the politics podcast Lage der Nation.

The EU is currently considering a similar mandate for all its 27 member nations, in the form of an amendment to the Energy Performance of Buildings Directive. In Brussels, the European Commission proposed obligatory rooftop solar on commercial and public buildings by 2027, and for residential buildings by 2029.

Climate Action Network Europe (CAN), a Brussels based advocacy group, charges that the proposed EU amendment is welcome but doesn’t go far enough, fast enough. It should address all new buildings – residential, non-residential, and public – and buildings undergoing fundamental roof renovation, as well as on top of new parking lots.

A first phase, CAN charges, should affect new residential buildings. A second phase applies to existing buildings, including commercial and public buildings. This rollout, though, should be staggered, targeting bigger roofs first. This would “enable an early start of the mandate while simultaneously the needed workforce could be trained and the necessary infrastructure for the material could be ramped up,” according to a report on the issue.

Critically, member states must be required to “create the conditions to ensure that all building owners are incentivized to equip their roofs with a solar installation, with a special focus on low income and vulnerable households,” according to the CAN report.

This kind of mandate, argues CAN, would unleash a solar energy revolution in Europe on a epic scale. All well and good, but the trick may be finding enough electricians qualified to bolt all of those panels to the roofs.