The global climate movement’s smaller numbers, expanded focus, distrust of parliamentary democracy, and radical offshoots reflect a mass movement frustrated with its inability to turn around international climate politics. Although understandable in light of the pace of climate breakdown and international backsliding, this frustration, channeled in the wrong direction, could sap the power of this vitally important protest movement rather than energize it. Paul Hockenos takes a closer look. 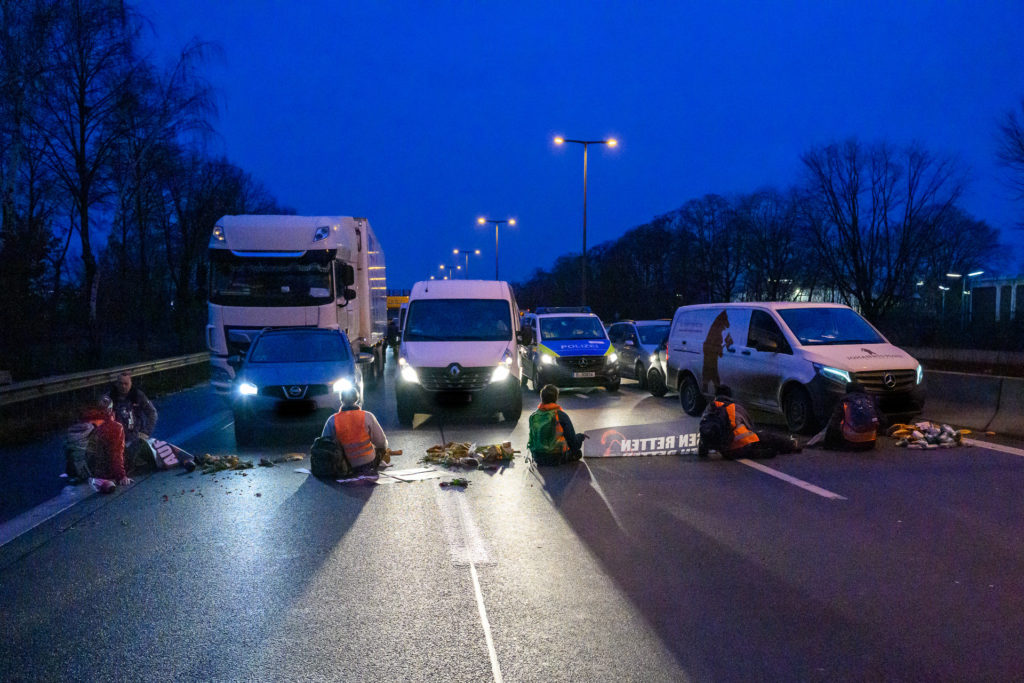 Activists from Letzte Generation blocking a highway in Germany. (Photo by Stefan Müller, CC BY 2.0)

In October, young activists in London, Dresden, Potsdam, and Munich – Germans from Letzte Generation and Britons from Just Stop Oil – doused iconic works of art, such as Vincent van Gogh’s Sunflowers painting at the National Gallery in London and Claude Monet’s Grainstacks in Potsdam’s Barberini Museum, with tomato soup and mashed potatoes. To their credit, at a time when the Ukraine war was dominating news programs, the brazen acts of civil disobedience grabbed headlines for the cause of the climate. Since the paintings were covered with plastic or glass, none of them were permanently damaged.

Letzte Generation and Just Stop Oil are sole mates of Declare Emergency in the US, Denierere Renovation in France, and other climate crisis protest groups. They claim that illegal but peaceful civil disobedience, such as defacing artwork and blocking traffic by gluing themselves to thoroughfares, rams home several points. For one, they want to reignite the conversation around climate action and instill a sense of urgency, which the global climate strikes no longer do. And what is the sense of preserving works of art for future generations when these generations may have no future, thanks to climate breakdown?  One commentator argued that there “is a poetic beauty in the protesters’ choices. They are simulating an attack on irreplaceable works of art, just as humanity is vandalizing our irreplaceable planet.”

Nevertheless, I’m sure that I wasn’t the only one sympathetic to the larger movement who cringed with unease at these acts. A sure way to turn public opinion against the climate movement is by defacing great works of art – or perpetrating other more-radical-than-thou acts of violence that lack a specific target and purpose.

Although one can understand the young activists’ frustration, they are acting on several false assumptions. The first is that climate activism thus far hasn’t had an impact. The end result that they want is to have the world’s powerful put the planet on a course to stop global warming at 1.5 degrees Celsius above pre-industrial temperatures.

Of course, that hasn’t happened – and indeed it must. Governments have not responded in full as climate activists have demanded and are not yet on the track to ward off the worst of climate breakdown. But the climate movement – bolstered by Fridays for Future and the global climate strikes since 2019 – has definitely had an impact. It has shifted the debate, involved millions of people worldwide in the issue, and prompted fundamental changes in global policy. Indeed, one of the climate movement’s main achievements was to set climate change on policy agendas around the globe with a scope and urgency so far unprecedented.

The prominence of the topics and the measures underway are now of a completely different order than before 2019. “For a decade we banged on politicians’ doors to get them to listen to us scientists about the science of climate change and what would happen unless we started at once to decarbonize,” Volker Quaschning, a German engineer and professor of renewable energy systems at the Hochschule für Technik und Wirtschaft Berlin, Germany, told me in 2021. “But with the global climate strikes, those doors flew open. It was a whole different story.”

And that different story is reflected in, for examples, the EU’s new goals and measures: the European Green Deal, Fit for 55, the green taxonomy, and the Circular economy action plan, among others. In December 2019, EU leaders, meeting within the European Council, agreed that the EU should achieve climate-neutrality by 2050. EU countries are now on one page about cutting greenhouse gas emissions by at least 55% by 2030. In June 2021, the Council adopted the European climate law – a key element of the European Green Deal. With it, EU countries are legally obliged to reach both the 2030 and 2050 climate goals.

The greater EU measures reflect the change in thinking and politics that happened in every member state – and a goodly share of that change happened as a result of the climate strikes. The phenomenon of millions of school kids across the world skipping school – a form of civil disobedience – spoke to the political class and millions of ordinary people in a way that neither the scientists, such as Quaschning, nor other experts could do.

Unfortunately, throwing soup and potatoes at artwork – or the blowing up of pipelines – doesn’t have the same effect. Rather than elicit sympathy and concern, it turns politicos and average people against the cause. Civil disobedience is symbolic and that symbolism has to be of such a nature that it impacts in a constructive way. Reckless violence is the equivalent of shooting into the air, rather than at a target.

Climate activists have every reason to be unsatisfied with the partial measures that the world’s leaders have taken thus far. But they have to embrace measures that will push the powers-that-be to do so.

Since 2019, the climate movement has changed in many ways – this much was evident at the September 23 Global Climate Strike this year. The movement has put climate justice – “People not Profits” was the protest’s banner – at its center, underscoring the global nature of the issue, the suffering of low-income peoples and countries, and the economic interests that stand behind fuller climate protection measures.

The Climate Strike’s numbers weren’t as overwhelming as in 2019 and 2020, but they were nevertheless impressive: 270 demonstrations in Germany, and hundreds more worldwide. In Berlin, about 50,000 took to the streets, making the point that this young generation cares very much about its future (and that Germany is now the epicenter of the climate movement.)

But what the movement today lacks – that it had a few years ago – is a form of civil disobedience with the equivalent punch of pupils striking from school. September’s action was called a “school strike” but it was just a couple of hours of school that the kids missed – not the sustained weekly strikes of 2019 and 2020.

It won’t be easy to find something as powerful as skipping school, but this is their mission.

Change in climate policy has to happen much, much more quickly. But it will happen incrementally, not in one fell swoop. The movement has to target public opinion, political parties, and governments – this is where power lies, not in grabbing a few minutes of prime time publicity.

In order to shift public debate and impact consequential policies, it has to focus on what it can achieve, within the system. This means underscoring its achievements thus far, targeting political parties while not becoming the political parties, and remaining critical of neo-liberalism as well as optimistic about changing it.

The greater movement has obviously lost some of its momentum. It can regain it by building upon what it has achieved, not acting out of desperation or expecting revolutionary change.