Methane pollution stemming from oil and gas production is accelerating climate change. New data from the International Panel on Climate Change (IPCC) finds that methane may be responsible for almost half of all global warming to date. As the United States becomes the world’s largest producer and exporter of oil and gas, monitoring suggests methane is simply billowing out from its biggest fields, particularly in Texas’ Permian Basin. In a new series on methane, lead blogger and podcaster, Michael Buchsbaum reviews the Permian’s growth and new efforts by Washington to get those rising emissions under control. 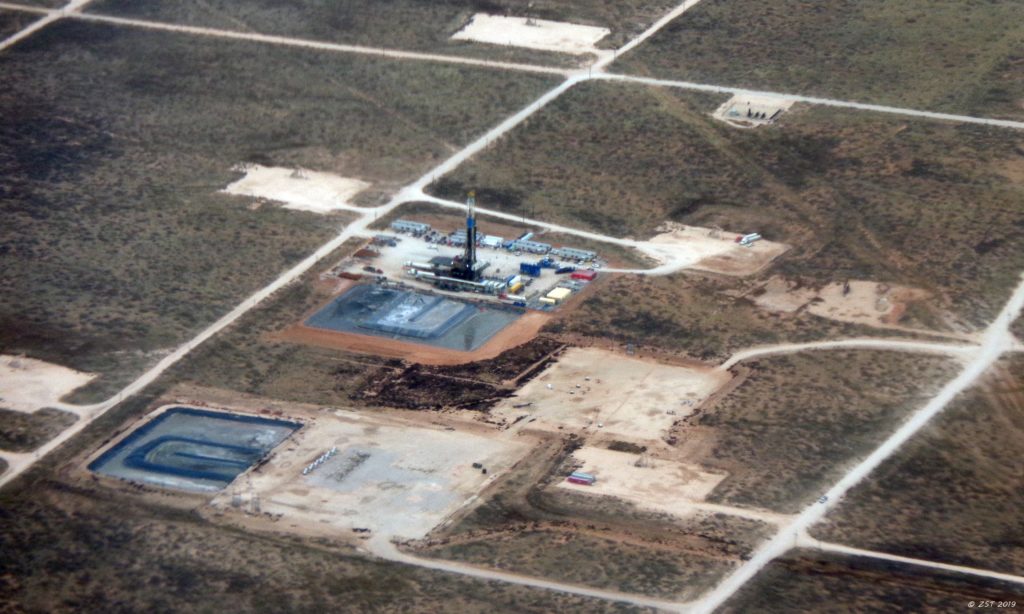 Stretching across west Texas and eastern New Mexico, oil and fossil gas has long been produced in the Permian Basin.

But boom times returned to the region in 2015 when then President Obama voted to overturn America’s decades old crude oil export ban.

Just six years ago, only 4% of total US crude oil production was being exported. But by 2020, even as actual volumes grew, upwards of 28% of crude totals were being shipped outside the nation, with the vast majority of that crude originating from wells inside the Permian.

Now producing some 5 million barrels of crude a day, the Permian has grown into the second largest oil and gas field (O&G) worldwide.

Combined with the 617 million barrels of gas liquids brought up out of the ground there in 2020, the region is now the largest field in the world, surpassing the national totals of Canada, Russia, Saudi Arabia, Qatar, and the United Arab Emirates.

At the end of 2021, NGOs Oil Change International, Earthworks, and the Center for International Environmental Law released the final three chapters of their fantastic Permian Basin Climate Bomb report series.

“The Permian Basin has, for the past decade, been the site of an oil and gas boom of unprecedented scale,” said Lorne Stockman, Research Co-Director of the NGO Oil Change International.

“While climate science tells us that we must consume 40% less oil by 2030, Permian producers plan to grow production more than 50%” through this decade continued Stockman.

Though oil remains the region’s moneymaker, with the help of fracking, the Permian now produces more than 30% of the US’ total fossil gas.

Once produced, most petro-carbons flow eastward through a dense pipeline network, eventually finding their way to one of the dozens of coastal facilities lining the shores of North America’s Gulf of Mexico.

Long one of the most polluted regions in the continent, the Gulf is home to a vast assortment of crude oil and gas refining operations, along with various plastic and chemical plants and other petrochemical infrastructure.

Now far in excess of US domestic demand, gas producers are eager to secure new markets. To reach them, industry is fixated on increasing its export capacity by constructing more liquid natural gas (LNG) facilities along coastal “Cancer Alley”, enabling them to ship to both hungry Asian and European consumers.

By the end of 2020, the US was exporting 16% of its fossil gas production. Steady growth through last year enabled the nation to become the world’s third-largest LNG exporter behind Australia and Qatar. Now new reporting from the federal Energy Information Administration (EIA) suggests that the US has pulled even with them.

But with four LNG terminals now in operation and two more facilities under construction at the end of 2021, industry hopes the party is only getting started.

According to new reporting from the federal Energy Information Administration (EIA), given current production rates and as these new and expanded Gulf Coast facilities come online, America’s LNG export capacity is set to make it the world’s largest shipper by the end of 2022.

And that calculus doesn’t even take into consideration the 18 additional proposed LNG plants now undergoing review and permitting.

Industry continues framing fossil gas as a climate-friendly “bridge solution” because methane only produces 50% as much carbon dioxide when burned as an equivalent amount of coal.

But methane itself is a potent greenhouse gas that is at least 84 times more heat-trapping than carbon dioxide over a 20-year time scale. And recent reporting shows that gas is far from the green-ish fossil fuel we once thought it was.

“Results indicate we’ve underestimated the methane impacts of fossil fuel extraction by up to 40%,” National Geographic reported in 2020.

As oil and gas mining in both the Permian and throughout the US has accelerated since the export ban was lifted, methane emissions globally have skyrocketed.

According to new figures from the US National Oceanic and Atmospheric Administration (NOAA), levels of methane in the atmosphere reached a record 1,900 parts per million (ppm) last year, an increase of nearly 1% compared to 2020.

Though it’s also naturally occurring, the O&G sector is the largest industrial source of methane emissions in the US and new Environmental Protection Agency (EPA) estimates find that about one-third of industry’s methane leakage come from routine transmission, storage, processing and distribution.

At November’s COP26 summit in Glasgow, President Joe Biden called climate change “an existential threat to human existence” and pledged to cut overall US emissions by up to 51% over the next nine years.

Additionally, Biden grabbed headlines by announcing his leadership of a voluntary global methane pledge, getting some 100 countries to agree on slashing methane by 30% below 2020 levels in eight years.

But just days later the administration offered some 80 million acres in the Gulf of Mexico for oil and gas leasing. And they plan to open more than 300,000 additional acres of public lands leases in March 2022.

Nevertheless, Biden and the Democratic-lead Congress are taking a stab at ostensibly controlling methane emissions.

The latter marks a new focus for this small agency that has long viewed leaks through the lens of physical safety. Their previous environmental efforts were only aimed at preventing and dealing with crude oil spills.

PHMSA is planning to publish their proposed rules in the Federal Register by May of 2022 and shortly thereafter begin checking industry plans to control methane with the help of inspections.

Frustrated by the widespread lack of awareness around O&G methane emissions, several NGOs have trained activists to venture into production areas with specially designed infrared cameras to record methane leakage as they find it.

In the next blog in this series, Buchsbaum interviews one of the world’s first methane hunters and discusses fresh data on the scope of the danger.

Readers can also listen to interviews with methane hunters and hear more about international efforts to detect and control methane on the Energytransition.org’s new podcast series.