Weeks after agreeing to phase out coal, Bucharest struck a deal to convert an aging state-owned coal-fired power plant to burn locally-sourced “sustainable” biomass instead. But Romania’s forest-covered mountains are already suffering from illegal timber harvesting and biodiversity loss. Yet until this twist in the nation’s “decarbonization” plan, little biomass was burnt for electricity. Activists fear accelerated deforestation. Lead blogger and podcaster, Michael Buchsbaum reviews the development in his on-going Romanian Power Move series. 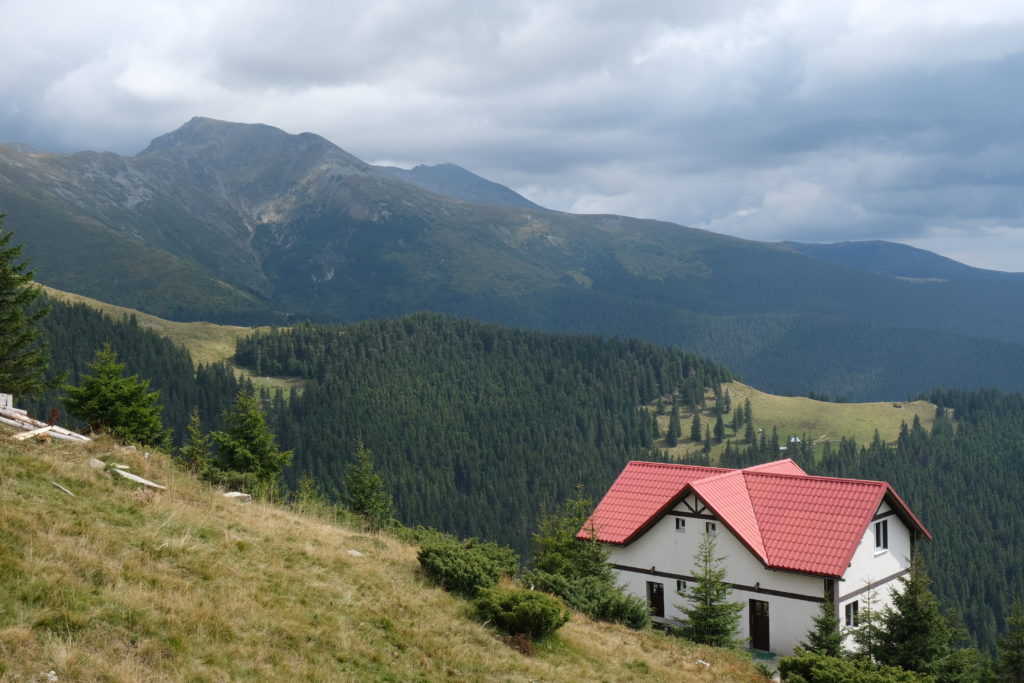 Romania’s forest covered Carpathian mountains are far too often the site of illegal logging, despite so much of the region being protected nature reserves. (Photo by Michael Buchsbaum ©)

The crumbling ruins of coal’s past line both sides of the only pot-holed highway through Romania’s post-industrial Jiu Valley. The nation’s largest coalfield, by 1979 almost 180,000 workers were swarming into over a dozen coal complexes strung along the smoky valley.

Driven by Bucharest’s relentless calls for more production, every day some 50,000 underground miners descended into the deepest shafts ever sunk in Europe. In 1983, the “jewel” of Romania’s coal industry, the Petrila mine, reached a depth of 940 meters and its 4,500 workers set a record of 1.2 million tons of hard coal won out of the tired earth.

Forty years later, a group of activists are fighting to preserve what’s left of Petrila’s buildings as an industrial heritage museum. And throughout the valley, just four pits are in operation, barely producing a combined thousand tons a day.

No longer feeding the nation’s steel mills or powering its hard industry, one of the last takers of Jiu’s coal is the ancient 150 MW Paroseni thermal power plant.

Owned by the bankrupt state-run Hunendora Energy Complex, which also runs the remaining mines, Paroseni is both barely functional and often poisonous. When it does burn coal, its emissions frequently exceed EU limits.

But its days are now numbered.

In early November Romanian Energy Minister Virgil Popescu signed a letter of intent to transform the plant into a biomass burner.

Combusting wood pellets instead of coal will enable Paroseni’s four units to continue boiling steam to make heat and electricity.

Even better, by taking advantage of the EU’s so-called “Carbon Loophole,” Paroseni’s burn will be magically “emissions free.”

“I promised, I delivered”

With the ink still drying following the signing ceremony, Minister Popescu exuberantly shared his role in sealing the conversion deal with the Norwegian firm, Arbaflame.

“I promised and I delivered!” said Popescu proudly.

Calling it a crucial step in Jiu Valley’s decarbonization, replacing coal with pellets produced in a sustainable way will dramatically lower the plant’s CO2 emissions. “Not only do we ensure heat and electricity production in a sustainable way,” said Popescu. “But we also bring a breath of fresh air from an economic point of view” since the factory where these pellets will be produced will also be built in Paroseni. Even better, he said, surplus pellets will be exported “so Romania will have a double benefit.”

Speaking to the concerns of Jiu’s inhabitants, he claimed to understand how the energy transition may frighten many of them, “but I would like to assure them that we will not abandon them, that we will find the best solutions for the local economy, for the Romanian ecosystem and for the National Energy System.”

The first such coal to biomass switch in Romania, conversion tests will begin in the first part of 2022. “That makes us very close to the moment when the decarbonization of Jiu Valley begins,” said the Energy Minister.

However, replacing locally mined coal with locally sourced biomass is not a one-to-one solution. Arbaflame claims that ideally, the pellets will only have 76% of the heat value of coal. Meaning stoking all four of Paroseni’s will require a lot of new biomass.

To meet this demand, Arbaflame will construct a new pellet factory in the Jiu Valley – bringing scare jobs to the economically depressed region.

Biomass is already a sensitive issue

While other nations, particularly the United Kingdom, have converted their coal plants to burn imported biomass instead, any claims of resulting climate benefits are dogged by how sustainably that wood is sourced, harvested and transported.

But in Romania, illegal logging is already a national scandal. Researchers fear that half or more of all timber harvesting in Romania is illegal, taken from areas that are supposed to be protected. Wood is often cut in such huge quantities that quotas are breeched and entire forests simply disappear. 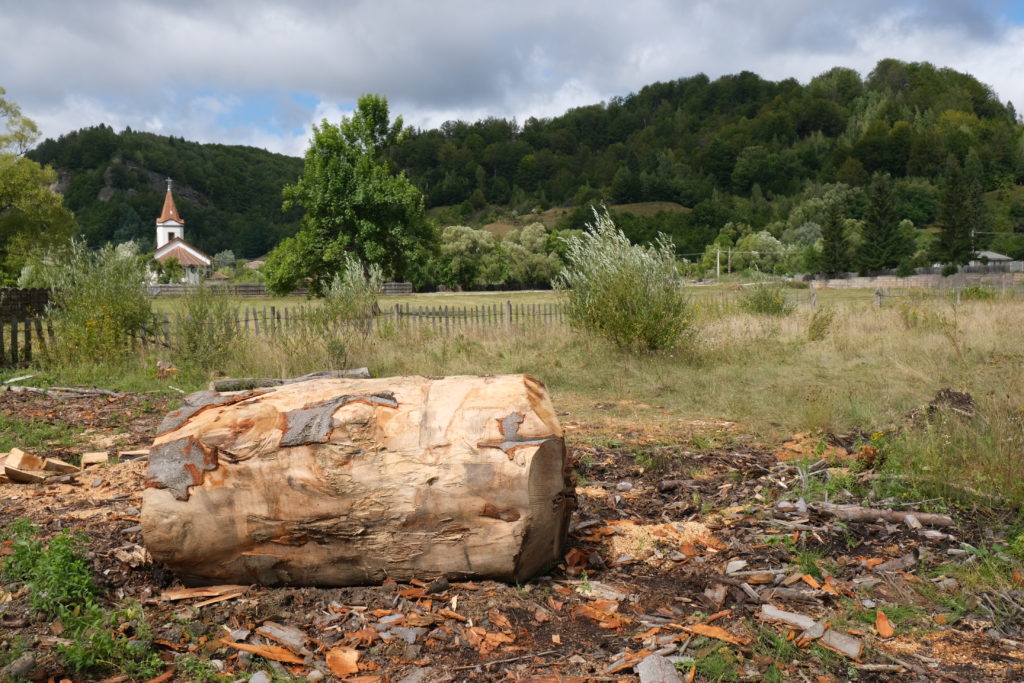 Old mine sites throughout the upper Jiu Valley are often used by the logging industry to cut up timber with smaller pieces being used for home heating or biomass burning. (Photo by Michael Buchsbaum ©)

However the biggest player (and potential culprit) in Romania’s forestry business is Romsilva, a state-owned firm that controls 48% of Romania’s woodlands.

Situated in a wide spot in the Valley, forests carpet the sides of the Carpathian Mountains above the Paroseni plant. Turn west out of its main entrance and the highway takes you straight into the heart of the Retezat National Park, Romania’s first. Sheltering one of Europe’s last remaining intact old-growth forests, already some of the continent’s largest pristine ecosystems are falling victim to chainsaw-wielding loggers.

Currently there is only one relatively small 35 MW biomass-fired power plant on the national energy system, related Alexandru Mustata, a campaigner with Europe Beyond Coal.

If converted as planned, Paroseni would have almost five times as much capacity.

“To start using large-scale forest biomass to produce electricity is a mistake,” said Mustata in an interview with Energy Transition.org, fearing that this will only add more demand to an already far too large market.

But the cost is beyond environmental. At least six forest rangers have been murdered in Romania and more than 650 violent incidents against them have been reported in the last few years, according to the Environmental Investigation Agency (EIA).

In an expose published by Al Jazeera, Gabriel Paun, founder of the Romanian NGO Agent Green, claimed encounters with illegal loggers have more than once almost cost him his life. “If one tries to mess up the interests of the forest mafia, you get in trouble and you can even die. Anything can happen,” he related.

Given how critical the situation has become, the European Commission has launched an infringement procedure against Romania for failing to stop illegal logging, the final step before the case goes to the Court of Justice of the European Union.

Note to readers, you can now read more and even hear excerpts of the interview with Alexandru along with other NGO campaigners and energy experts throughout our new Romanian Power Move blog and podcast series.