For the past years, Latin America has topped the list of the most dangerous region for environmental activists in the world. According to Global Witness, more than two-thirds of all respective assassinations recorded globally take place here with Colombia being the most dangerous country for environmental activists in the world. 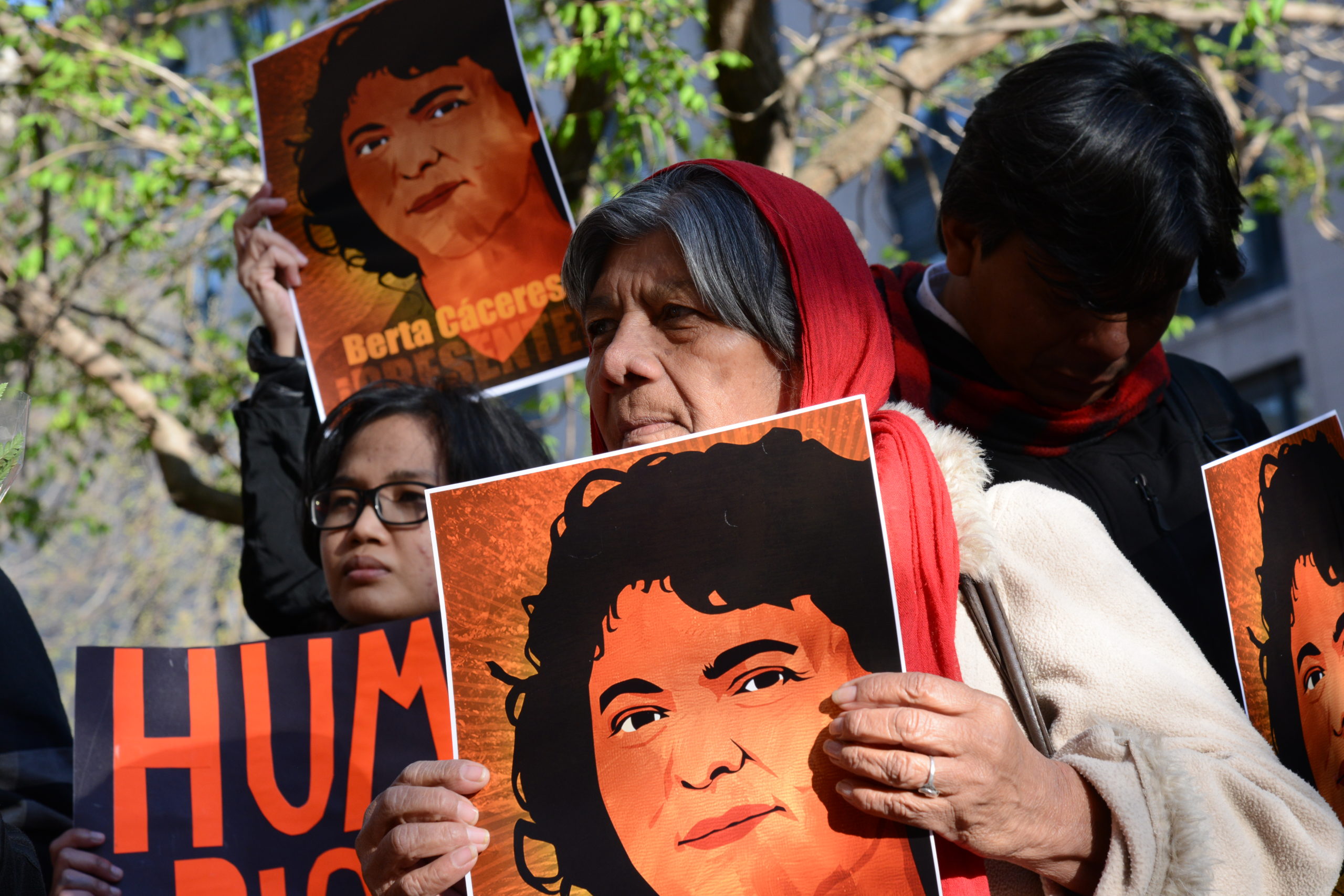 Following the IACHR hearing on the human rights situation in Bajo Aguán, on April 5, 2016, a vigil was held at the doors of the OAS for Berta Cáceres, who was murdered on March 3, 2016 in Honduras.

The dismal trend is likely to rise further as energy, agricultural and extractive industries employ a growing number of private security forces to “protect” their interests. At the root lies a violent history of colonialism and extractivism that has left many Latin American countries devoid of strong and independent institutions to secure the rule of law for their citizens. Hitmen are – if convicted –charged in show trials, yet the masterminds behind the plots rarely stand trial.

The one exception has been the recent ruling by a Honduran court against the assassins of Berta Caceres, an environmental and human rights activist and winner of the prominent Goldman Prize in 2015. It is, however, likely to remain an exception for a long time to come.

Berta Caceres’ murder in Western Honduras in 2016 death, widely reported by a number of international media, exposed the grim fate of many Latin American environmentalists to a global audience. Her campaign against the construction of a hydro plant in Honduras had sealed her fate. In 2019, the front men were sentenced to 30 and 50 years in prison. Yet this time the courts did not stop there. In July this year, the likely mastermind behind the murder, Roberto David Castillo, former CEO of the company behind the hydro plant construction, was convicted of murder. In Latin America, almost all murders go unnoticed by international and even national media and thus international pressure. If Berta Caceres murder was treated differently, it was entirely due to the attention paid by international media coverage.

Several elements peculiar to the region intertwine to produce this sad state of affairs. For one, Latin American economies rely on extractive industries ever since the mineral wealth of the region was discovered by the Spanish conquerors. Between the 16th and 19th centuries the region produced more than 80 percent of global silver supplies, fueling the monetary systems of large parts of the then developed world. Today, it is still responsible for the largest copper, iron, lithium reserves in the globe. Exports of agricultural and mining products remain the cornerstone of the Latin American economy, and conflicts over land rights are inevitable. Many countries across Latin America have grown dependent on these exports. This has left them largely dependent on the extraction and agricultural industry.

For another, whatever wealth results in Latin America is often distributed among the very few: both the business and political elites are likely to benefit most. The connection between political and business interests has in many places produced a breeding ground for corruption and obscure business activities. A small percentage of the population shares the profits among themselves and has no interest in changing this self-serving state of affairs. As a result, most government and public institutions are weak and those in power uninterested in supporting an independent and functioning judiciary. When it concerns the powerful extractive, energy and agricultural industries, political and business interests generally hinder fair and fact-based trials.

Finally, natural resource extraction has come at a very high environmental and social cost to local populations who do not form part of the political elites. Absent and lax environmental regulations and standards as well as the state’s inability – and unwillingness – to enforce them add to the problem. The disputes over resource extraction and land rights follow a similar pattern. They usually involve a conflict between a powerful, often multilateral company and the local community. These communities are often indigenous and more vulnerable to the exploitation of their land as they lack the necessary political and economic weight to fight both the companies and their own governments.

In theory, laws and regulations in most Latin American countries call for industry to conduct environmental assessments prior to starting their projects. But these are often not performed in a proper manner. Indigenous people remain politically sidelined due to their low level of formal education, their high illiteracy rates and, in some cases, the fact that they do not speak the national language. Consultations over environmental assessments are seldom conducted with the required transparency.

For many of the indigenous groups a fight for their land represents a fight for survival. If they lose their land, they lose everything. The conflict over proposed new extractive, energy and agricultural activity on or near their land thus becomes personal and often turns violent, with courageous environmental activists in the kind of crossfire that killed Berta Caceres.

Structural political and economic deficiencies leave Latin American environmentalists vulnerable to threats and acts of violence. One way to protect them better would be to give maximum publicity to their efforts, such as that which helped to bring Berta Caceres’ murderers to justice. Another would be to put pressure from abroad on the multinational companies engaged in the energy, extractive and agricultural industries of the region. Environmental groups in Europe and North America should engage in both. Those fighting for nature and justice in Latin America do not have many other friends to choose from. Unfortunately, Latin America’s environmentalist murder ranking won’t improve anytime soon.