On September 22 China’s President Xi has delivered the country’s new pledge to reach peak carbon emissions earlier than 2030 and carbon neutrality by 2060 to the UN General Assembly. If pursued, this pledge marks a fundamental shift in China’s global climate ambitions and will have profound long-term impact on the global economy and energy markets. How sustainable will this impact be for the globe? Well, it all depends. Maria Pastukhova has the details.

China’s pledge to reach peak carbon emissions by 2030 is not new but has been submitted as part of its unconditional Nationally Determined Contributions (NDCs), as China ratified the Paris Agreement back in 2016. In his recent speech, this pledge remains essentially the same: President Xi states that China’s emissions will peak “before 2030”, but without any specifics on how much earlier than 2030.

The pledge on carbon neutrality by 2060 is, on the contrary, news indeed. Though set 10 years later than acknowledged as sufficient by the International Panel for Climate Change (IPCC) to limit the global warming to 1.5C°, and limited to only carbon dioxide (CO2), as opposed to all greenhouse gases, it is a strong move. It puts China ahead of the second-biggest global emitter –  the US – who is in denial of global warming since its withdrawal from the Paris Agreement in 2016, as well as of other major CO2 emitters. Among the latter are India (#3) and Russia (#4), which have expressed no intent to go carbon-neutral until now, as well as Japan (#5), which pledged to cut emissions by 80% by 2050, with the carbon-neutrality goal being left fairly vague at “the earliest possible time in the latter half of this century”.

More importantly, this pledge signals China’s willingness to lead the global climate efforts despite its long-term stance of a developing economy that should not have to share the same carbon burden as developed nations (e.g. European countries, the US), whose emissions went unchecked since the Industrial Revolution. In the negotiation process of the Paris Agreement, China repeatedly stressed the key role of the “Common But Differentiated Responsibilities (CBDR)” principle. With China having now moved beyond purely “developmentalist” rhetoric, other emerging global economies, such as India, Indonesia, and Turkey, might follow the example.

Carbon-neutrality, which boils down to a balance between emitting carbon and absorbing it from the atmosphere, should lead to a net-zero carbon footprint of an economy. Given the scale of the Chinese economy and its projected growth until 2060 (est. 3-4 percent annually despite the COVID-19 pandemic), going carbon-neutral will require drastic decarbonization, possibly combined with large-scale application of negative emission technologies. Though the concrete policies to achieve this goal are yet to be indicated, most probably in the upcoming 14th 5-year plan, they will have to address the most carbon intensive sectors, i.e. energy, industry and transport (Figure 1). 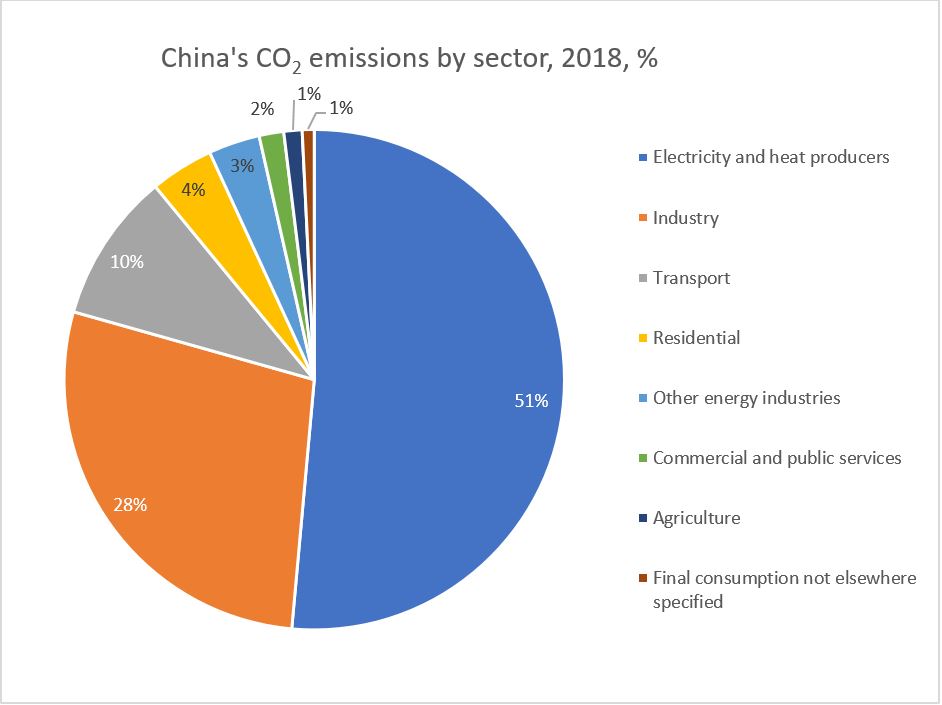 Major shifts likely to be triggered in the global energy markets

Given that 88% of China’s primary energy supply is made up of fossil fuels (figure 2), the scale of domestic energy system decarbonization by 2060 will have to be gigantic. Possible policy options might include ramping up nuclear power capacities implying the dangerous and cost-intensive consequences of fissile technology. Further boosting the country’s electrification, cross-border interconnections for power exchange along with scaling up the domestic renewable capacities could be a strategical choice as well as the commercialization and large-scale usage of carbon capture, utilization and storage (CCUS) technologies.

The decarbonization of China’s energy mix will have long-term repercussions on the international coal, oil, gas, and critical raw materials markets. Major exporters of coal (Australia, Indonesia, Mongolia and Russia) and oil (Russia, Saudi Arabia, Angola, Oman, Iraq, Iran) to China will have to turn to other markets in the mid-term and restructure their export mix in the long-term perspective. Natural gas imports via pipelines from Russia, Turkmenistan, Myanmar and in form of LNG from Australia, Qatar, Malaysia, Indonesia will probably gain traction in the mid-term. The new reality of China going carbon-neutral will, however, not necessarily be reassuring to these countries either – this being particularly true for Russia. As the European Union began moving towards decarbonization, a pivot to Asia, and in particular to China, seemed a viable alternative for future Russian gas exports. Now this opportunity also has a clearly indicated shelf-life[1].

As the domestic wind and solar segments in China are currently saturated, adding any new variable power generation capacities will have to be combined with extended power transmission and storage. As a result, the further consolidation of China’s control over the needed rare earths and other critical raw materials (e.g. copper, lithium, nickel etc.) markets, as well as China’s increased efforts to become the global powerhouse and a standard-setter on low-carbon technologies are to be expected as well. 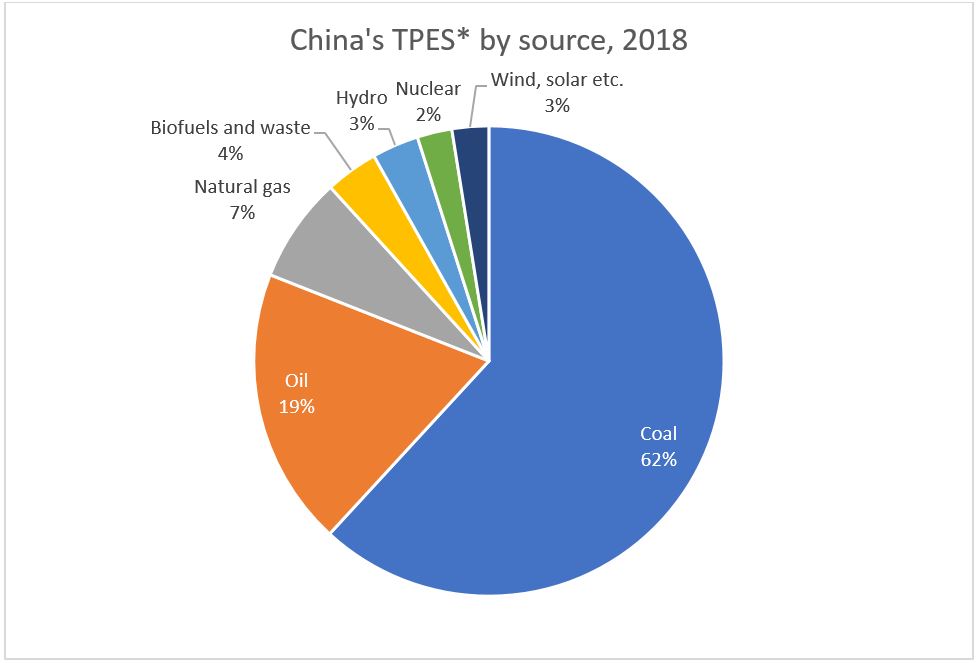 *Total Primary Energy Supply (TPES) is defined as energy production plus energy imports, minus energy exports, minus international bunkers, then plus or minus stock changes.

The decarbonization of China’s most energy (hence, carbon-) intensive industry sectors will not necessarily contribute to a reduction of CO2 emissions globally. Carbon leakage is a key word here: as China plans to accelerate the development of its information technology, particularly internet and 5G applications, Chinese coal, cement, steel, glass and manufacturing industries might as well be further relocated abroad. In the recent years, the Chinese government has issued several bans on adding new capacities in these sectors, as part of the supply-side structural reform (SSSR), and as a measure to alleviate the domestic environmental pollution.  The industrial “exodus” has been gaining momentum, in particular as part of the Belt and Road Initiative with the main focus on Central, South and Southeast Asia. For instance, by 2019, China has financed about 53GW of coal power plants in 24 countries (most of them in South- and Southeast Asia, and in South Africa), and considers financing another 56 GW.

As such, China’s pledge on carbon-neutrality doesn’t exist in a vacuum – on the one hand it might push the countries dependent on fossil fuel exports to restructure their economies and proceed with energy transition. On the other hand, it might substantially delay the energy transition in the emerging and developing economies by dislocating China’s carbon burden to countries with weaker climate policies. It remains to be figured out, how the first trend can be reinforced, and the second – constrained, or at least shaped in a sustainable way.

[1] For instance, the long-term contract on gas supply via Power of Siberia pipeline will expire by 2048. Under the current circumstances, it is highly questionable whether it will be prolonged beyond this datum.