Even though unit costs for renewable energy have fallen sharply, there’s clearly more finance needed for mitigation and adaptation. The least developed countries still don’t have the technologies they need. Can the private sector deliver, or should governments and the UN intervene, asks Silvia Weko

India’s solar capacity has boomed, unlike many of the least developed countries (Photo by Bkwcreator; CC BY SA 3.0)

An idea which was often repeated at the UN intersessional in Bonn this month was that “if there’s a market case, the funding will follow.” Therefore, the private sector should be given a prominent seat at the table. This idea was vehemently opposed by some civil society actors who see multinational corporations as wolves in sheep’s clothing. They suspect that the corporations only want to continue business as usual, and involving them is a trap. Carolina Schmidt, incoming president of the Chilean delegation, reassured NGOs that this December’s COP25 will only engage with private sector actors who “show real ambition” and will be a “Citizens’ COP”.

The market case for clean energy

Clearly, the private sector has become aware of the business case for renewable energy over the past years. In most countries, solar and wind are cheaper than coal and there has been a correspondingly large increase in renewable energy investment. China and India in particular have seen exponential growth of clean energies. However, there has been little change in the amount of renewable energy in many of the least developed countries (LDCs). LDCs have the highest levels of energy poverty (around 62 percent of people in LDCs have no electricity access, according to the UN) which has a further detrimental impact on human health, development, and gender equality.

The problem of public goods

Climate change protection is a public good: it costs something, but benefits of the efforts are shared by everyone, which warrants state intervention. Most governments have climate action plans, and at the UN level, the Climate Technology Center and Network (CTCN) tries to help developing countries get access to both mitigation and adaptation technology. However, they don’t see a way around the public goods problem more generally. As one CTCN representative argued at the intersessional, the need for adaptation technologies will only increase, and it needs to be prioritized in the same way that other safety concerns like military capabilities and public health are. You vaccinate people because doing so creates positive externalities for the whole society: protection from epidemics. This may be the way to think about promoting adaptation technologies, which can help avoid worse catastrophes later down the line. 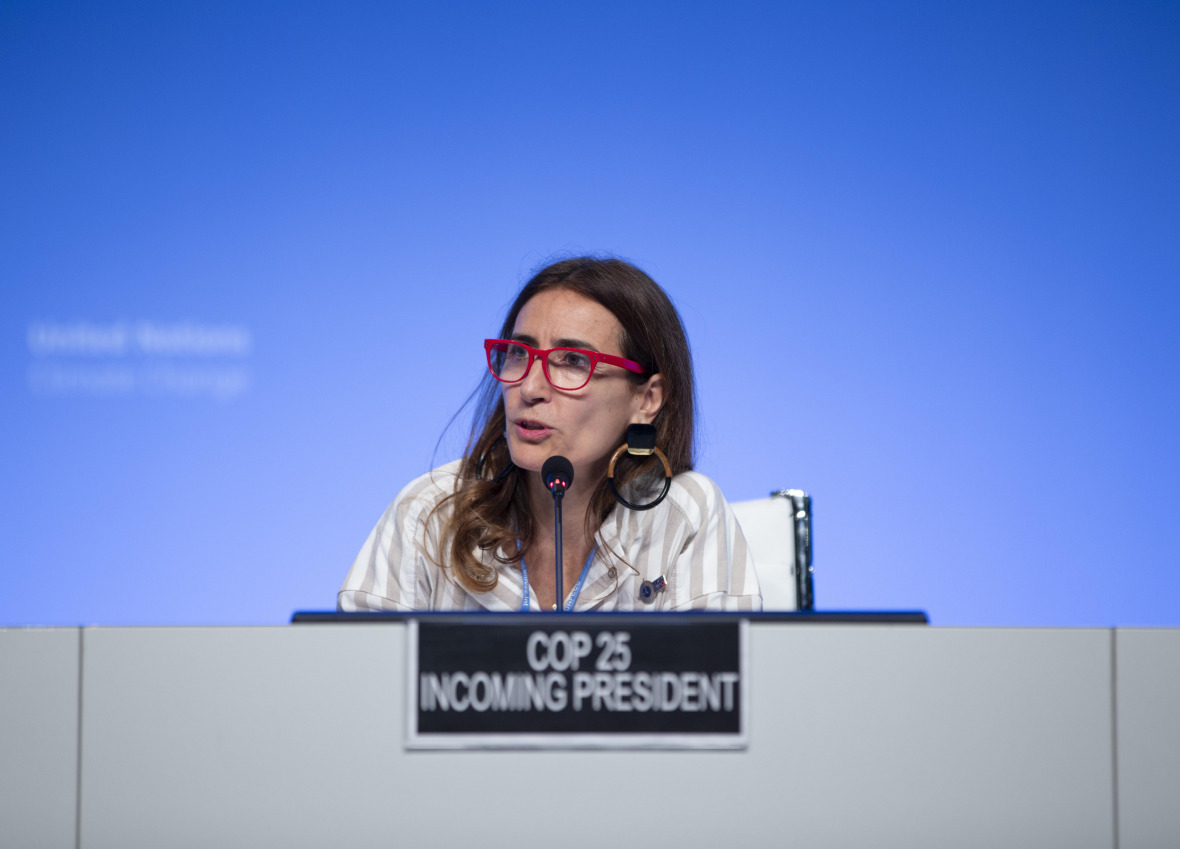 The incoming president of COP25, Carolina Schmidt of Chile, presented her vision for a successful climate summit at the intersessional in Bonn, with raising climate ambition as a top priority. (Photo by UN Climate Change; BY NC SA 2.0)

The UN has some tools at its disposal to provide the technology needed to help developing countries advance their adaption and mitigation. The Technology Mechanism and its executive arm (the CTCN) aim to support clean tech development and transfer and its offices in developing countries work with partners on the ground to assess their needs and get access to and funding for adaption and mitigation projects. Nevertheless, the funds and resources are limited and will not fill the gap left by private finance.

However, there are policy tools at the international community’s disposal which could create a business case for adaptation and mitigation. One such tool is market mechanisms like the former Clean Development Mechanism (CDM) – there is currently a heated debate over how the new market mechanisms should be designed in order to foster the double financial shift needed for the energy transition. Another solution would be for countries or regions to internalize the costs of greenhouse gases through a CO2 price, and using this to fund mitigation and adaptation. It remains to be seen to what extent the “Citizens’ COP” this December will be able to push policies that will help developing countries get access to the technologies they need—and to what extent business may push back. Given that the delegates in Bonn could not agree on the science behind the IPCC 1.5 report, I am not holding out hope.

A call for action

It’s clearly not enough that unit costs for clean energy are getting lower: it’s time for governments and international bodies to ensure least developed countries have both mitigation and adaptation technologies. We can’t expect there to be a business case to invest in technologies without policy actions; and we have to accept that for public goods need public solutions. Here, clean tech transfer initiatives like the CTCN can help, but the longer this process takes, the more expensive and difficult adaptation will be.

This article has been republished from IASS Potsdam.