“Blown Off-Course” is part one of a series on current wind energy challenges and opportunities. Upcoming blog posts will address the on-going tension between off- and on-shore wind development, challenges to onshore wind expansion, as well as the vital role community wind energy continues to play in Germany’s Energiewende.

Warning signs are beginning to appear for the German offshore wind industry.

With 276 MW of fully installed turbines far out at sea not yet feeding power to the electrical grid, a stubborn lack of grid expansion progress, and only a narrow investment pathway, investors specializing in offshore energy development are starting to look away from Germany.  Even as larger turbines come online and are producing more energy less expensively, groups warn that political conditions are hampering the growth of Germany’s critical wind energy sector, with the vital expansion of both on and offshore generation at stake.

According to new figures from the trade group WindEurope, total European offshore wind capacity grew by 2.6 GW in 2018. This includes about 400 new grid-connected turbines spread across 18 projects. Most of this new capacity (85%) was deployed in the United Kingdom and Germany, followed by Belgium and Denmark. Though investments in new offshore wind amounted to €10.3bn, a 37% increase over 2017, industry leaders UK and Germany connected slightly less capacity than previously. 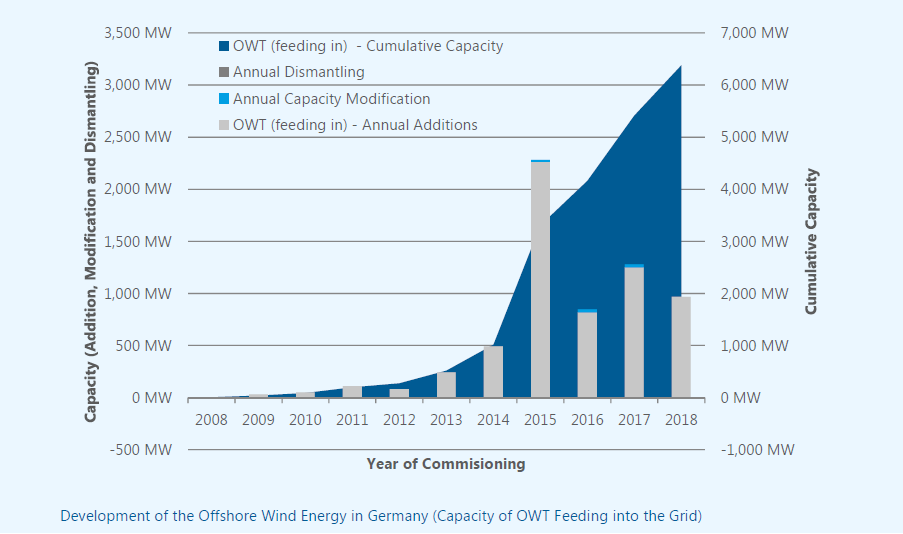 WindEurope also reported that the average size of individual offshore wind turbines continued to increase to 6.8 MW in 2018, up 15% from the previous year. However, the UK installed the world’s biggest offshore turbines – 8.8 MW – and opened the world’s largest offshore wind farm – Walney 3 extension, at 657 MW. Germany also opened their largest wind farm to date, as the Borkum Riffgrund II (465 MW) was fully connected to the grid. As for project owners, Ørsted connected the largest amount of wind capacity in 2018, followed by E.ON, Global Infrastructure Partners, Equinor and Macquarie Capital.

In total, Europe now has 105 offshore wind farms comprised of over 4,540 turbines operating across 11 countries with a total capacity of over 18.5 GW. A further six offshore wind farms are currently under construction in Europe, including the giant Hornsea One in the UK; with a planned 174 turbines, it will be the largest offshore wind farm to date. Construction started in 2018, and in February the first installed turbines were ready to supply energy to the grid.

“The technology keeps developing. The turbines keep getting bigger. And the costs keep falling,” said WindEurope CEO Giles Dickson. “It’s now no more expensive to build offshore wind than it is to build coal or gas plants. And it’s a good deal cheaper than new nuclear. More and more governments are recognising the merits of offshore wind.” Poland, which has previously blocked renewable energy at every turn, plans to build 10GW of offshore wind by 2040. Unfortunately, says Dickson, “Germany’s 2030 targets are modest and France has no plans to invest.”

According to the figures published by the German WindGuard, over a thousand offshore turbines with a total output of 6,382 MW were feeding into the grid last year. While another 276 MW of fully installed turbines remain unconnected, offshore farms with a combined capacity of 966 MW are also under construction while another 112 MW of potential capacity still await a final investment decision.

Going forward, Germany’s legally possible expansion of 7.7 GW by 2020 is expected to be achieved as planned. However WindGuard and other industry groups argue that it is critical to raise expansion targets to at least 20 GW by 2030, particularly given the planned coal exit, which calls for the last coal-fired plants in Germany to close no later than 2038. 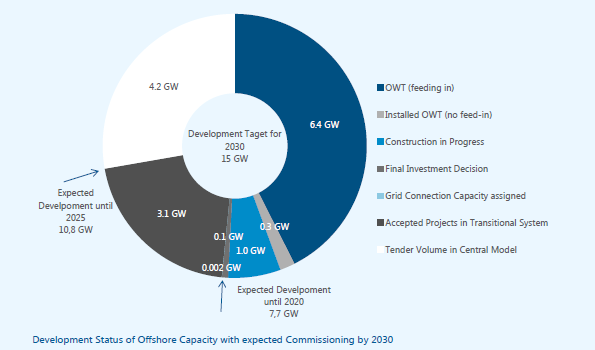 To break the deadlock, at a news conference in late January, several groups including the German wind energy association (BWE) and the Association of German offshore wind farm operators (BWO), called for a special offshore wind capacity tender for no less than 1,500 MW in the first quarter of 2019. Moreover, they stressed that the industry needs a reliable framework and a clear political signal.

To achieve the goals of Germany’s coalition government to reach 65% renewable power by 2030, the offshore wind industry needs to expand to at least 20 GW by 2030 and at least 30 GW by 2035. However, “how offshore wind will contribute is not yet clear,” warned the groups.

“2019 must be the year of progress in energy policy. Offshore wind energy is of central importance for the achievement of climate protection targets and secures value creation in Germany as an industrial player,” said the BWO in the joint press release. “Insisting on the status quo costs jobs and threatens the international competitiveness of Germany. The current migration of qualified workers to foreign markets is a warning signal that must be taken seriously.” Germany’s accumulated offshore wind energy experience “is an essential advantage in the growing international competition that must be maintained. There must be no further delay.”

But there is good news for offshore wind industry: the German government will go ahead with power lines meant to move power from the windy north to the rest of Germany. In early February, Germany’s Federal Network Agency (BNetzA) finally decided on the route for the first part of a high-voltage power line.

Such high-voltage power lines are seen as an indispensable part of the Energiewende, and the best way to balance the fluctuations of wind energy from the north and solar energy from the south. Operators and the German federal government want to build another 4,650 kilometres of new transmission lines by 2025, including four north-south direct-current, high-voltage connections.

How that will happen is another open question – the plans have faced resistance from both citizen groups and advocates of distributed and community energy. But unless Germany develops, enacts and sticks to a pathway forward, how the nation will achieve the majority of its clean energy goals remains elusive. And while politicians continue to debate, impatient investors are already looking elsewhere.