The move toward electric vehicles is making steady progress worldwide, as companies and countries align behind aggressive growth targets. But a renewed battle between California and the Trump Administration on vehicle policies is throwing North American plans into turmoil. Ben Paulos takes an in-depth look.

While the Trump administration actively blocks EVs, other countries are investing (Photo by Visitor7, CC BY-SA 3.0)

A major global player in promoting zero-emissions vehicles is the ZEV Alliance, a consortium of 14 nations and sub-national governments in Europe and North America.

Members of the Alliance – consisting now nine US states, two Canadian provinces, one German state, and four European countries – have pledged to “strive to make all passenger vehicle sales ZEV (zero emission vehicle) as fast as possible, but no later than 2050.” Their goals add up to putting 10 million EVs on the road by 2025 and 20 million by 2030.

At September’s Global Climate Action Summit, the ZEV alliance welcomed Baden-Württemberg, the birthplace of the internal combustion engine and heart of the German car industry, and Washington state as new members.

Speaking at the Goethe Institute in San Francisco, Winfried Hermann, Minister of Transport for Baden-Württemberg, said that focusing the design of cities on the automobile “has proven to be a mistake. Cities around the world are facing similar problems.”

“Baden-Württemberg is well known for big, fast beautiful cars,” he said, since it is the home of Mercedes, Porsche, and Bosch. “Our economic strength is dependent on car sales and these car companies.” 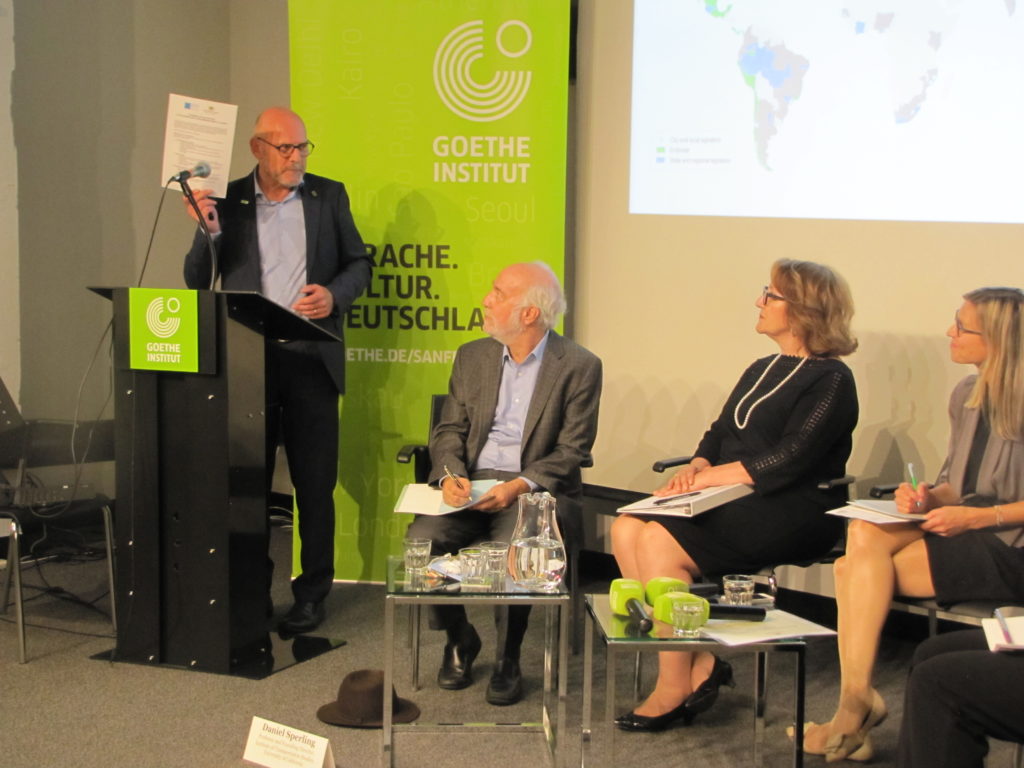 Nonetheless, cities in Baden-Württemberg are banning older diesel vehicles in city limits, while adding bus and rail lines, lowering transit fares, and improving bike access. “We are not going to abolish the car,” Hermann said, “but the vehicles should be as clean as possible, and soon emission free.”

The world’s major carmakers have been setting their own goals, which add up to 15 million electric vehicles by 2025, according to figures from the International Center for Clean Transportation (ICCT). Half of these come from Volkswagen, Renault-Nissan, and Toyota, who have pledged to hit 20% to 25% of their new car sales by 2025.

The ICCT counts 4 million battery-electric (BEVs) and plug-in hybrid (PHEVs) on the road worldwide as of August. China and the United States account for over 60% of those sales, while California accounts for half of US EV sales. China has by far the largest car market in the world, with 27 million cars sold last year, almost as much as the US and Europe combined. Norway has the highest market share for EVs, with just over half of all vehicles, including 28% from BEVs.

China has been increasingly aggressive at promoting what it calls “new energy vehicles,” which includes BEVs and PHEVs as well as a small number of fuel cell vehicles.

Speaking on another panel at the Summit, Wu Songquan from the China Automotive Technology & Research Center (CATARC) attributed China’s interest to severe urban air pollution, a reliance on imported oil for more than 60% of demand, and an economy that is still growing rapidly. Thanks to strong policy support, he expects Chinese consumers will buy one million non emission vehicles (NEVs) this year.

The government’s official goal is that NEVs should account for a quarter of sales by 2025 for both light-duty and heavy-duty vehicles, and 40% by 2030. Wu said that a government-appointed advisory panel has found that this level of penetration would require a staggering 80 million electric vehicle charging points by 2030.

This steady progress is being threatened by policy turmoil in the United States. In August, the Trump Administration proposed freezing national fuel economy standards previously set by the Obama Administration. Rather than requiring car companies to hit a fleet average of 54 miles per gallon (mpg) by 2025, Trump would cap them at about 37 mpg. Trump has further proposed to block California’s ability to set its own vehicle emission standards, a right California earned by regulating vehicle emissions before the United States did, when it required catalytic converters on vehicles in the 1960s to address Los Angeles’ notorious smog problem.

California was also an early mover on advanced technology vehicles, adopting its first standard in 1990 and refining it since then. Thirteen states have followed California’s GHG emission standards while eight have adopted the EV mandate.

California Governor Jerry Brown has called the Trump Administration’s move “stupidity” and vowed to fight it.

“For Trump to now destroy a law first enacted at the request of Ronald Reagan five decades ago is a betrayal and an assault on the health of Americans everywhere,” Brown said in an August statement. “Under his reckless scheme, motorists will pay more at the pump, get worse gas mileage and breathe dirtier air.”

Dan Sperling, a professor at the University of California at Davis and a member of the board of the Air Resources Board (ARB), said that the conflict could lead to different standards between states, recreating the patchwork that auto companies lamented in the 1990s and 2000s, and that was resolved in the Obama years. And it will certainly result in years of litigation.

The US turmoil is creating uncertainty for states and car makers, but is causing unique consternation for Canada. Ontario has a substantial number of companies in the automobile supply chain, closely linked to companies in Detroit, just over the border. To ease the border differences for their industry, Canada “incorporates US policy by reference” into their own policies, according to Helen Ryan, head of the Canadian Department of Environment and Climate Change, speaking on the panel.

The panel moderator, ICCT’s Drew Kodjak, pointed out that due to “chaos in the United States” Canada’s “modus operandi is in tatters — there is nothing to align with anymore.”

“We may have to separate from that to retain independence,” Ryan replied. “We have our own legislative requirements and timelines. It is imprudent to align with any US policies since they are all uncertain.”

Despite the challenges, California is not slowing down, indeed they are accelerating efforts to cut emissions and reach Governor Brown’s goal of putting 5 million EVs on the road by 2030.

Sperling said the ARB is voting soon to create a new $2000 incentive for electric vehicle purchases and to move to the next phase of the state’s Low Carbon Fuel Standard, a requirement that petrol suppliers cut the life-cycle carbon footprint of their products. The standard has been an important driver for zero and negative-carbon fuels, like electricity and biomethane.

“Vehicles of the future have to be electrified, autonomous and connected,” Minister Hermann concluded. “New mobility services can replace private car ownership. This has great potential for efficiency, climate friendliness, and safety.”