Green cities aren’t just good for the environment – they’re good for the people who live in them. Freiburg, Germany has a great quality of life with its parks, public transit and clean air. But will the city keep pushing environmentalism or rest on its laurels? Paul Hockenos takes a look. 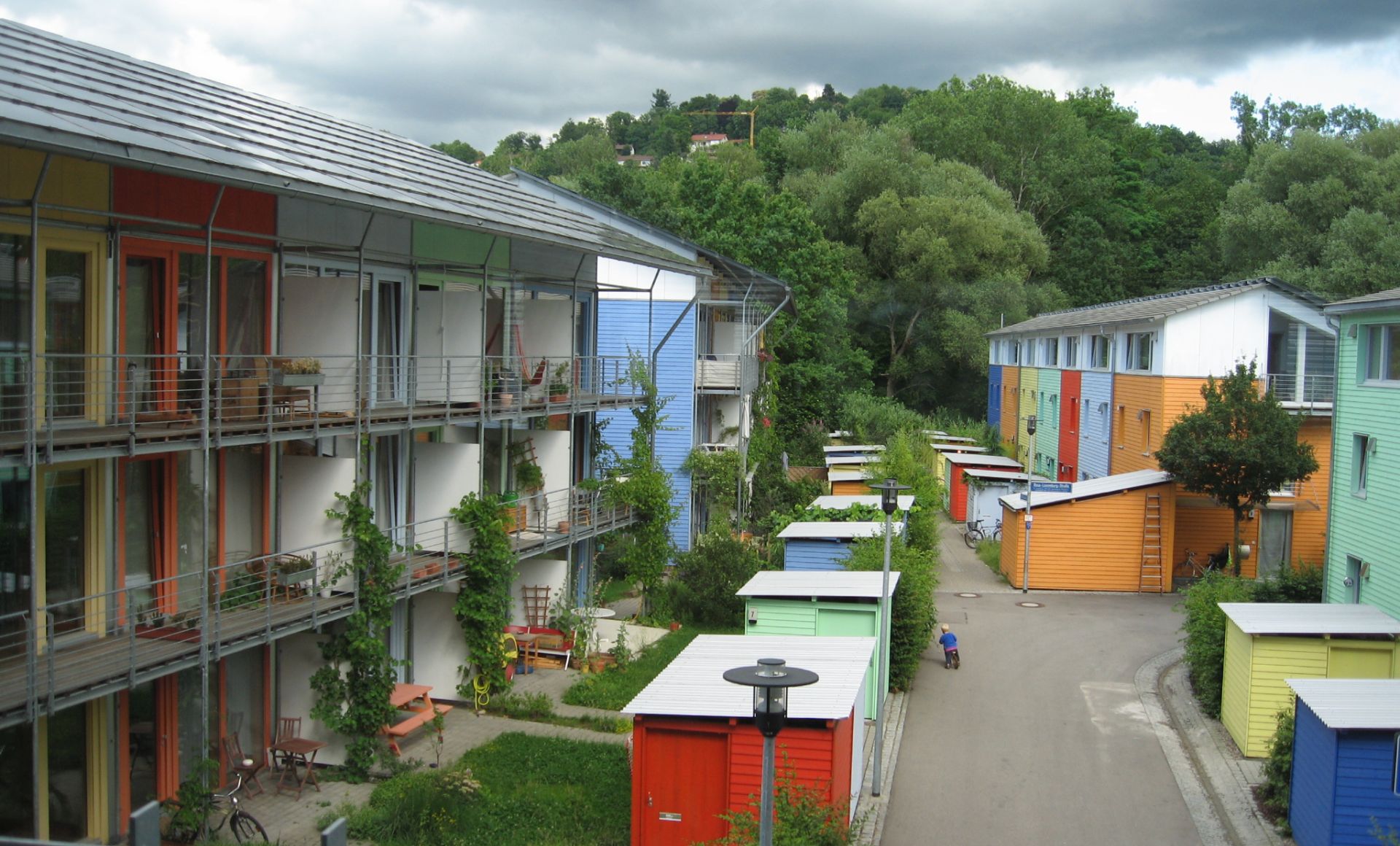 Eco-friendly neighborhoods are great for young families, where children can play outside without fear of traffic (Photo by Claire7373, CC BY-SA 1.0)

Strolling through the city of Freiburg, tucked into Germany’s southwestern-most corner and near the Black Forest, an out-of-town environmentalist could think they had died and gone to heaven.

The Vauban area of Freiburg is particularly sustainable. It’s full of “solar neighborhoods”: the rows of modernist, wood-paneled, Rolf Disch-designed homes with thin solar PV panels for roofs are called “plus energy” houses. That’s because they generate more energy than they consume by means of passive solar heating (architecture that collects, stores, and distributes solar energy in the form of heat), state-of-the-art insulation, and electricity-producing solar photovoltaics. 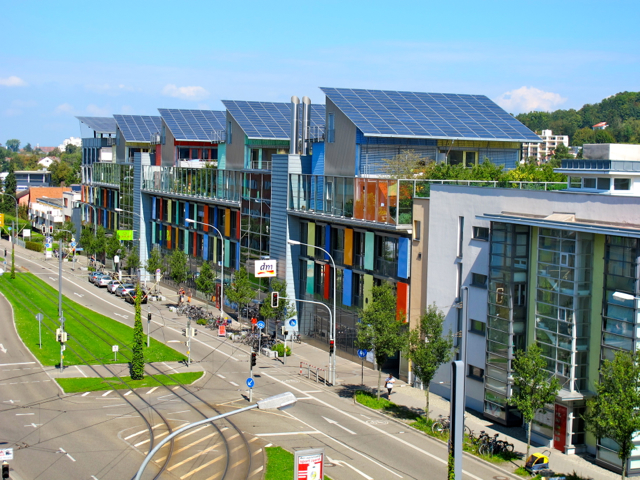 Other buildings are climate neutral with “green roofs,” namely urban gardens atop the structures that, among other things, capture rain water that is then re-used. There are no parking spaces anywhere in view of the forest-lined streets where kids play football: cyclists, joggers, and football players have right of way there, not automobiles.

So many years after the last of the anti-nuclear-energy battles, I hadn’t expected the 1970s-hippie vibe with yellow and red Atomkraft? Nein Danke flags hanging from balconies and old caravan wagons propped up on cinder blocks behind some buildings. The kindergartens and schools are brightly painted with alternative cartoon characters and funky playgrounds dot the spacious yards between buildings. Any city kid would be envious. 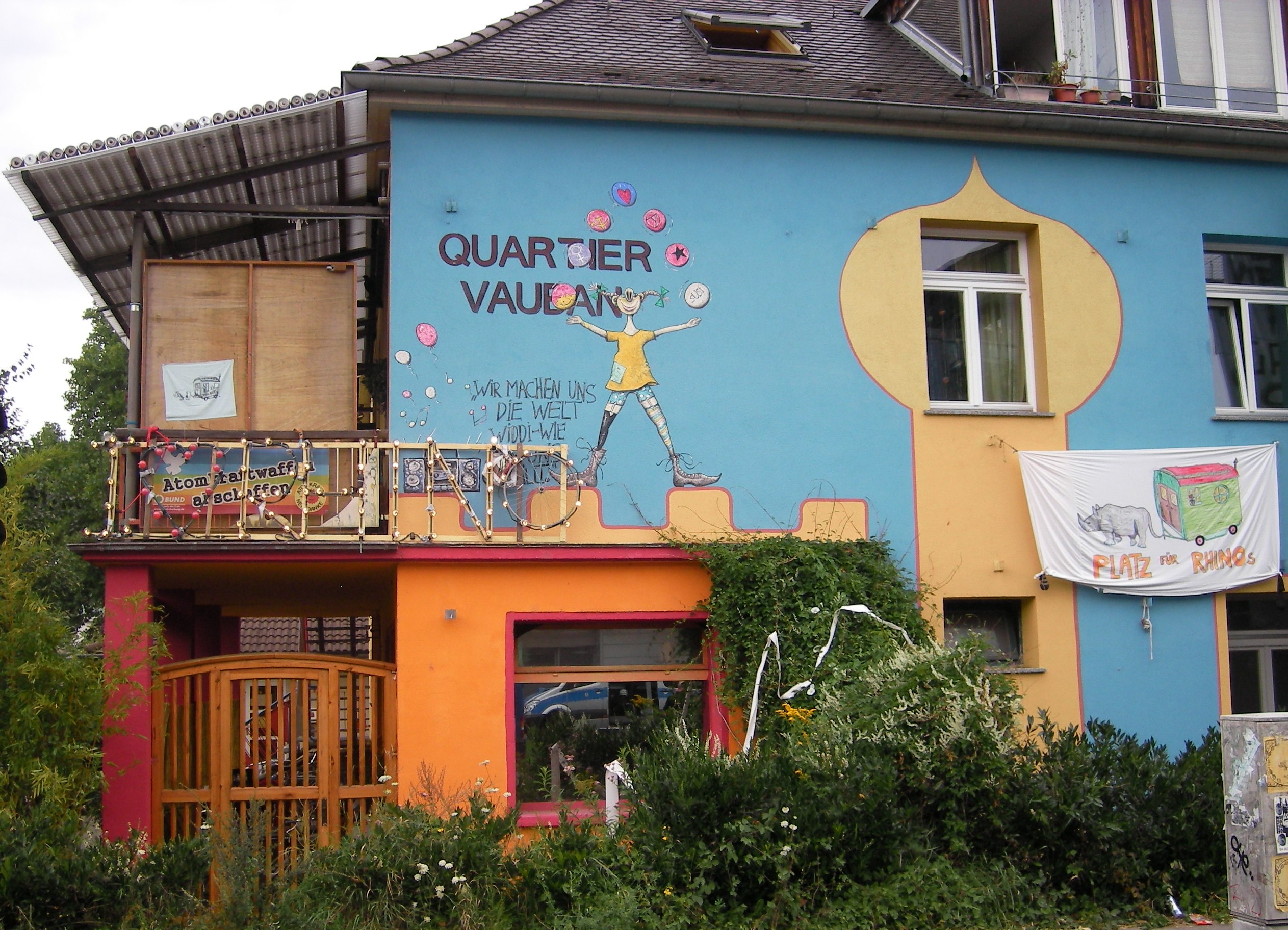 One surmises that more than a few of the region’s early renewables pioneers live here, and obviously take a keen interest in keeping Vauban sustainable and livable – and thus attractive even to those who may not once have manned the barricades. So sought-after is living space in Vauban, there’s a long waiting list that just gets longer.

Vauban though is just one of Freiburg’s gems, another being the brand new city hall that is also “plus energy”, supplying all the power it needs and then some generated from 800 solar panels on its facades and roof. Freiburg, a city of 225,000, has chalked up accolade after accolade in years past for its green solutions and sustainable urban planning. Only one city in Germany has more kilometers of bike lanes, and Freiburg’s standards for the energy efficiency of new housing is a league more ambitious that the federal government’s minimum standards.

For over a decade Freiburg has been sinking its CO2 emissions, even though its population and economy has grown non-stop. Newcomers want to live there because sustainability increases the quality of life – not, necessarily, because climate change is breathing down our necks and cities like Freiburg show a way forward.

Yet the Freiburgers with whom I talked shared the impression that their city “didn’t play in the first league anymore,” as one woman told me, referring to the European soccer leagues. It has rested on its laurels, she told me, rather than keeping up with trailblazing, environmentally progressive cities such as Copenhagen. Cycling is as precarious as ever with cars and bikes vying for space, say critics. And after 16 years in office, Freiburg’s Green Party mayor (an Australian who returned to Australia) was replaced by a Social Democrat just this year, whose priorities are affordable housing and childcare.

In the bright, new offices of the city hall, Iris Basche, head of the city’s environmental planning, says that there’s a grain of truth to the accusations – better is always possible — but that Freiburg is still in the top tier of Europe’s green cities. “We’ve already accomplished the big-ticket items that were easier to do, such as greening all of the city’s buildings, including schools and the university,” she says, also mentioning the expansion of Freiburg’s public transportation to every part of the city. Now the city is taking on the sectors that are harder to crack, one at a time, like the private sector.

Freiburg, for example, has finally — after more than a decade of trying — convinced Freiburg’s manufacturing sector to go green, which means covering rooftops and empty spaces with solar panels and introducing combined heat and power (CHP) technology to capture heat generated from the production processes, which will heat thousands of homes. The plan itself is vast, covering all of the bases – mobility, energy management, efficiency, renewable energies – and includes a nationwide PR campaign to tout Freiburg’s environmentally friendly brand.

A perk that keeps Freiburg on the cutting edge is the 25% share on concessions that the city is paid yearly from Badenova, the dominant regional utility company, which pays the city around 3 million Euro annually that is spent on climate protection. Last year alone, the money went to a solar PV feasibility study for urban households, nine combined heat and power units for schools and buildings, mini urban solar parks, the Green Industry Park (see above), and others.

The new city administration’s first hurdle will be passing a new climate protection plan for Freiburg, which is currently being formulated. One version is “climate light,” an improved, updated plan that won’t ruffle many feathers, while a second version would bite deeper, upsetting and perhaps alienating constituencies like car and home owners.

The way the city administration leans might point to whether Freiburg will return to the first league, or just put on a good show among the also-rans.