The transition of the energy sector towards clean and safe renewable energy sources will allow Ukraine to build a new strong economy and break out of socio-economic decline, argue Oleh Savytskyi and Oksana Aliieva. It’s time for Ukraine to embrace renewables to combat global climate change, and to enhance security and welfare of its people.

The fight against global climate change and 100% renewable target cannot be isolated from other dimensions of sustainable development such as social justice and economic aspects. An energy transition needs to be designed in a way allowing for the realization of as many as possible co-benefits.

Wisely designed, a renewable energy system has a lot to offer, particularly for aspects highly relevant to Ukraine: mitigation of air pollution with positive effects on public health, enhanced energy security and overcoming dependence on energy imports, as well as numerous advantages of the modern decentralized renewable energy technologies creating many jobs also in regions.

A recent study by the Institute for Economics and Forecasting Ukraine and the support of the Heinrich Böll Foundation named “Transition of Ukraine to the Renewable Energy by 2050” proves that the energy transition in Ukraine is feasible and pays off. The results demonstrate three potential future scenarios for the development of the Ukrainian energy sector: conservative, liberal and revolutionary.

According to the revolutionary scenario (Fig. 1), assuming consistent government measures to support renewables and energy efficiency, by 2050, the share of renewable energy of final energy consumption (FEC) may increase to 91%. The total final energy consumption can be reduced by 27% compared to 2012. At the same time, the primary energy intensity of GDP improves by the factor 4.7 compared to 2012. 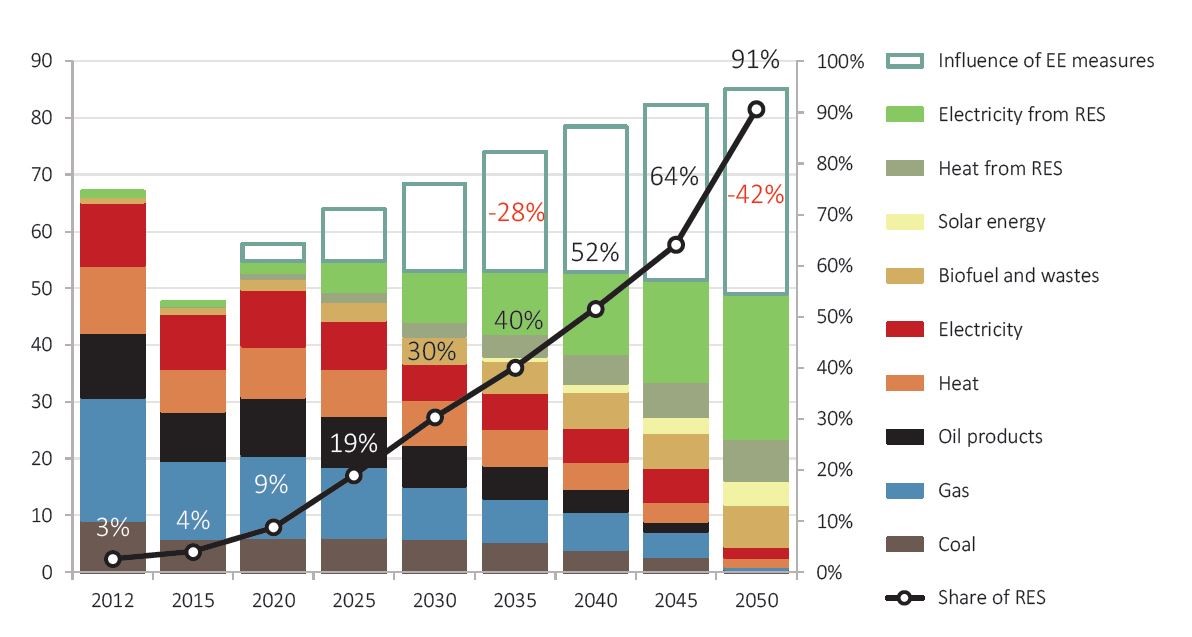 Change of the structure of the total final energy consumption and impact of energy efficiency according to the revolutionary scenario.

The remaining 9% of energy consumption mainly relates to metallurgical and chemical industries, which use fossil fuels not only as energy sources, but also as raw materials.

Unlike the prospects of energy-intensive industry, long-term trends in transportation, households and service sector are more determined. The future will see more energy-efficient technologies in construction and appliances, widespread use of electric cars, electrification of transportation, and the use of heat pumps and air conditioners for heating and cooling.

All this will require a significant amount of electricity, and it is therefore expected that the share of electricity in final energy consumption will significantly increase. These models show that the potential of applying the existing renewable energy technologies in Ukraine is sufficient to meet the growing demand for electricity while simultaneously replacing outdated, worn out and environmentally hazardous facilities of the traditional power industry. 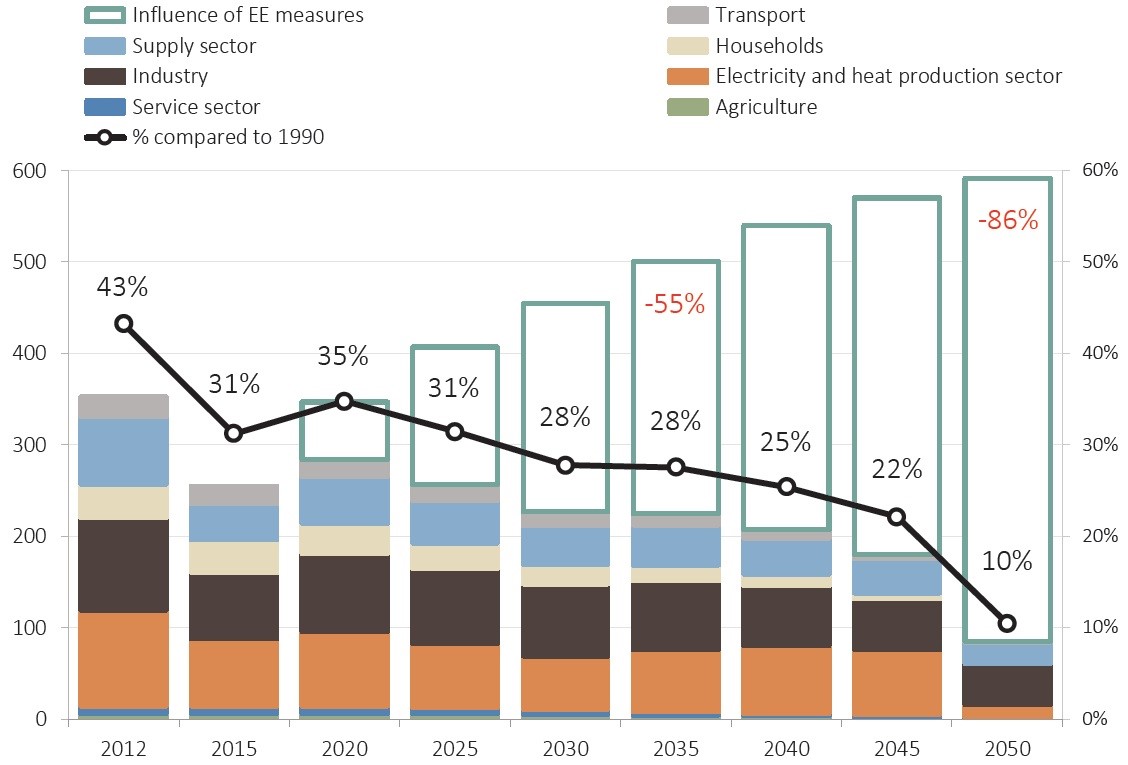 Unfortunately, the current national policies set much less ambitious targets for renewables and greenhouse emissions reduction. The Energy Strategy of Ukraine for 2035 (referred to here as the Strategy) does not envisage a rapid increase in the level of energy efficiency of Ukrainian economy, even if now production of one unit of GDP in Ukraine consumes 3-4 times more energy than the EU average.

The goal for 2035 set under the Strategy aims for renewables to account for only 25% of the final energy consumption. But according to the revolutionary scenario, in 2035 it would be possible to achieve an increase in the share of renewable sources up to 40% with simultaneous reduction of the overall consumption by 28%.

Although the Energy Strategy of Ukraine for 2035 aims for CO2 emissions not to exceed 50% of 1990 level in 2035, this is not an emissions reduction compared to 2012. At the same time, the revolutionary scenario presented previously shows that thanks to technological upgrades, energy efficiency measures, and switching to renewables, greenhouse gas emissions in Ukraine in 2030 can be reduced to 28% of the 1990 level and to 10% in 2050.

Another issue that must be addressed is the human cost of Ukraine’s reliance on dirty energy. Ukraine has the highest levels of toxic air pollution and inflicted mortality and morbidity rates in Europe. This is due to heavy reliance on coal in the power sector, poor fuel standards in transportation, the lack of proper environmental regulation, and weak enforcement.

Taking into account all of these factors, as well as Ukraine’s intention to be integrated into the European Union, constructive energy policy in Ukraine should promote development and rapid introduction of renewable energy sources, improvement of energy efficiency, reduction of the specific energy consumption and dependence on fossil fuels.

If the country wants to move towards building a modern economy, then energy efficiency, renewable energy sources, knowledge-intensive clean production and innovation should become real priorities. They must be consistently supported and introduced at all policy levels, from local governance to the highest executive authorities.