Wind power prices have plummeted in recent years since Germany switched to auctions. Now, a study has found what readers of this blog already knew: the prices only look low because they are reported as though future electricity were already being generated today. Craig Morris explains.

The new German policy aims to control – and curtail – the amount of renewables (Photo by Eclipse, edited, CC BY-SA 3.0)

Last October, I wrote about how auction results seem to make wind and solar power much cheaper. Germany used to offer payments called feed-in tariffs, and the specific rate offered applied when the grid connection was made. With auctions, price announcements are made at the beginning of a project. We are thus comparing apples and oranges.

In a sector with rapidly falling prices, like with wind and solar, the timeframe makes a big difference. Projected future feed-in tariffs applicable when the auctioned projects will be completed are not so different than the auction prices. 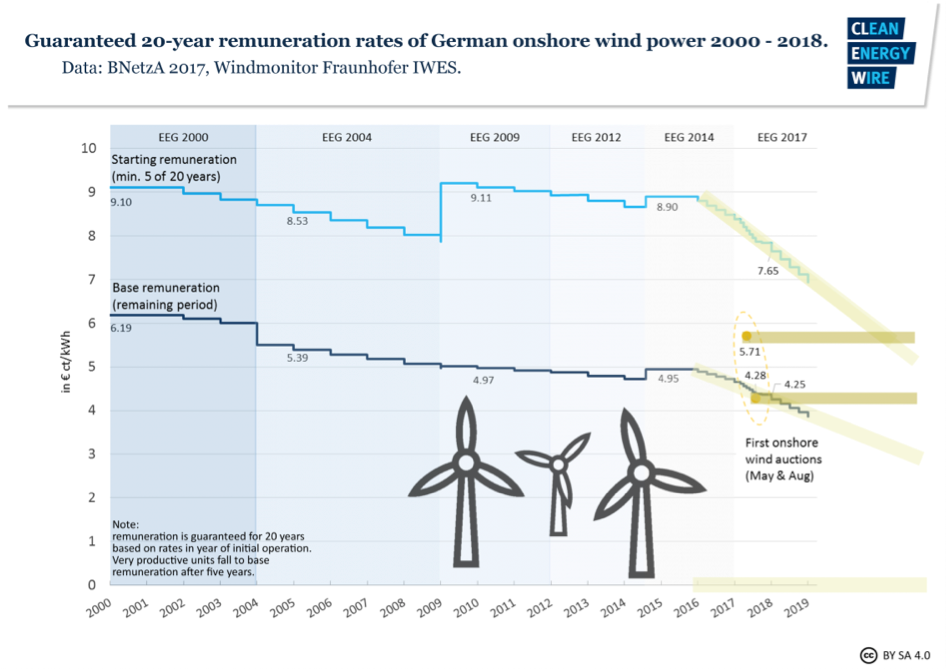 My edited version of CLEW’s chart showing how much cheaper auction results seem to be. The lines indicate what rates were applicable (maximum and minimum) under feed-in tariffs, while the two encircled dots represent the results of Germany’s first two auctions for onshore wind. But while the feed-in tariffs apply on the date of the grid connection, auction prices are reported years in advance. Draw the lines out, and the difference shrinks.

Now, a group of German researchers have investigated the situation for onshore wind power (in German). Instead of merely drawing out the feed-in tariffs for the future, as I did in editing the chart above, they adjusted for project size and location. Feed-in tariffs were lower for windy areas, and much of the price reduction from auctions results from a focus on locations with a lot of wind.

They find that projects from the first round of onshore auctions were around a quarter more expensive than they would have been with feed-in tariffs. For the second round, the price was roughly the same, whereas the third round produced savings of around 10%.

All of these prices are based on the assumption that the projects will be completed near the deadline, so within four years for projects eligible for preferable treatment as citizen energy and two years for the rest. The authors say that the greater price reductions from auctions would result if the projects were completed considerably before the deadline. But this outcome seems unlikely; the authors surveyed project planners and permitting authorities and found that the general expectation is that projects will indeed not be completed until shortly before the deadline.

Overall, the price difference does not seem so great, but auctions entail more risks. The report sums up the general concern about whether the auction winners will actually build. Citizen energy projects did not have to acquire permits to participate in the auctions; if those permits are not granted in timely fashion, the wind farms might not be completed.

Furthermore, the low prices are based on assumptions about future advances in turbine technologies. Unfortunately, not all of these new turbines are well documented, which could further slow down the permit process. Finally, any citizen groups and environmental organizations that might oppose a wind farm will only become active now that it is known which projects placed winning bids and can proceed.

Of course, the trajectory of the price of auctioned wind power is down, so one might expect the gap to widen between projected feed-in tariffs and new auction results. But in the end, the authors say that the small savings up to now might not be worth the extra bureaucratic effort and the risk that projects might not be finished: “the at best marginal reduction in the compensation level,” they write, “is an extraordinarily expensive benefit from the change in wind power support brought about by policymakers.”

These findings were generally known, however, though perhaps not in such detail. It is therefore unlikely that this line of argumentation will lead German policymakers to reconsider feed-in tariffs, which are effectively no longer offered for wind farms; they remain available for projects smaller than 750 kW, which rules out almost all wind turbines, leaving only solar projects.

The study thus basically further documents the real reason for the shift from feed-in tariffs to auctions: it wasn’t about price, as lots of people assume; the goal was to give policymakers a way to control, and hence limit, the amount built annually. Auctions still do that well, so they may be here to stay.