The new governing coalition taking shape in Germany aims to build a lot more solar and wind “if the grid can absorb the electricity.” Craig Morris spoke with German experts, and no one could tell him what that means.

How do you tell if the grid can take more renewable energy? (Public Domain)

Recently, I wrote about the latest negotiation results for a new German government. On Sunday, the Social Democrats adopted the proposal for a new grand coalition – a repeat with the Christian Democrats – albeit with a lukewarm 56% of voting members. The country is now set to get a continuation of the old coalition that few seem to want, including the coalition partners themselves.

But the new grand coalition will not be the same as the old; the platforms differ. The ambitions for renewables and climate protection are greater than before, though details are still lacking. For instance, an additional 4 GW of solar and 4 GW of wind are to be added by 2020 “if the grid can absorb the electricity.” How do you tell whether the grid can take more?

There are two potential starting points: negative power prices and curtailment of renewable electricity. The latter is referred to in German as “EinsMan,” which is short for “feed-in management.” Let’s take each of these in order.

The number of hours with negative power prices has been on the rise over the past few years, as shown below. But this metric only indirectly pertains to grid capacity; it more precisely shows cases when demand for power from conventional plants drops so low that it becomes cheaper (because of technical constraints) for these plants to pay customers to off-take electricity to avoid ramping down further. 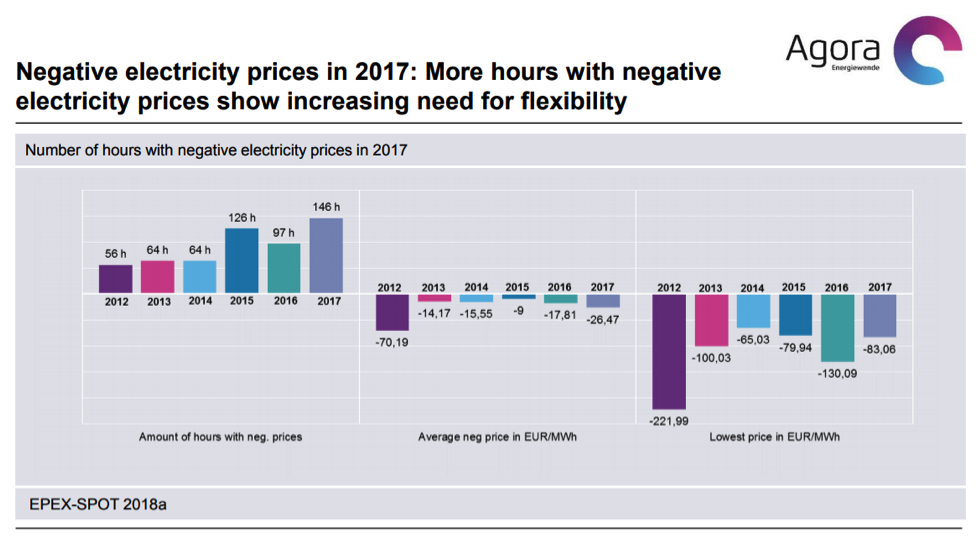 Furthermore, negative prices apply in the entire price zone for both the German and Austrian grids. There is only one price signal then for this entire area, but grid congestion occurs locally, not across all of Germany and Austria at once. Here, we need to revert to a more precise metric: “EinsMan”. Grid operators are allowed to curtail electricity from wind, solar, biogas, cogeneration, and mine gas when specific sections of the grid are endangered.

The amount of renewable electricity curtailed skyrocketed from 2013 to 2015. After falling in 2016, it rose again slightly in 2017 according to preliminary figures. 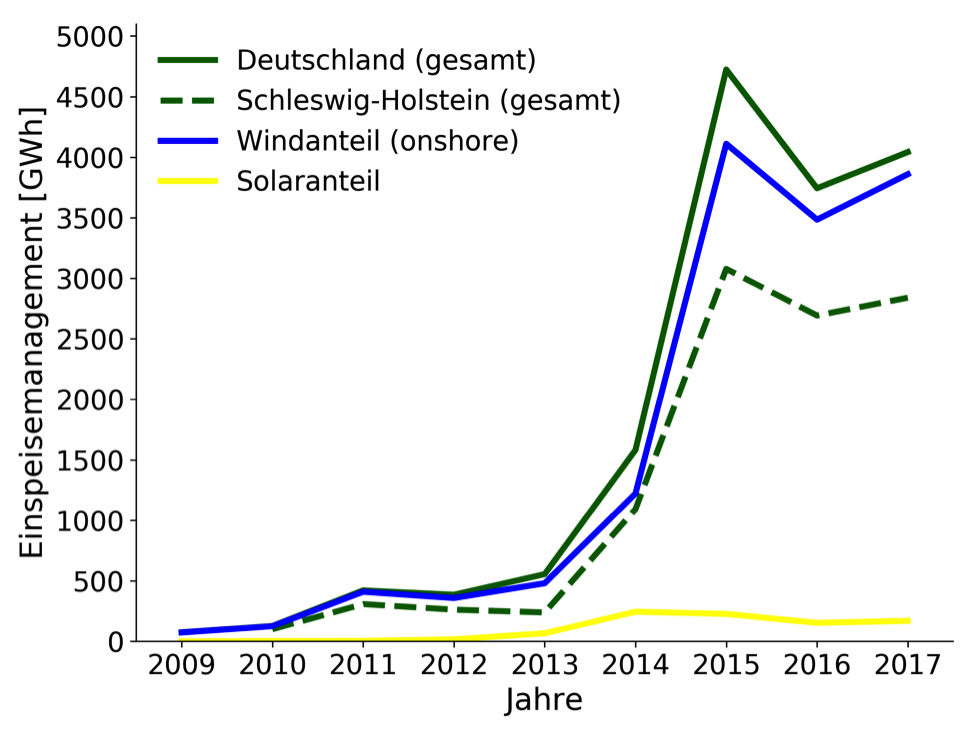 The green line represents the total amount of renewable electricity curtailed; it never reached 1% of total German power generation (around 6,000 GWh). Most of the curtailed electricity is on shore wind power (blue line); little solar is curtailed (yellow line) probably because much of it is connected at the low-voltage distribution level, whereas curtailment occurs at the high and medium-voltage levels. Schleswig-Holstein is the state where most curtailment occurs (dotted line). Source: Ubimet.

Ubimet, a service provider, already visualizes the EinsMan data, which are available by postal code, and combines them with weather data, renewable power forecasts, standard load profiles, grid topology, and load flow calculations to produce a forecast. Policymakers don’t even need the forecast, which wouldn’t be available for a whole year anyway; the data for the previous year could be used to show where grid congestion occurs, and wind farms could be excluded from auctions within that postal code unless the grid had been expanded in that area.

But no one I spoke with expects this to happen. Angela Pietroni of think tank Energy Brainpool says the requirement for grid capacity could just be “a loophole to limit the auction volumes.” To make matters worse, Andreas Jahn of the Regulatory Assistance Project (RAP) says that there is a lack of transparency in grid data in general, including with re-dispatches – when the grid operator requests that a conventional plant change its output immediately to stabilize the grid. (See our previous report entitled Blacked out German grid.) But he also points out that most wind and solar are connected at lower voltage levels on the grid; re-dispatches take place at higher levels.

The question of transparent grid data is entering the foreground in Germany. Over at Energy Post, Jahn sums up the main issues, including a ruling by the German Constitutional Court last year that revenue from the grid must be more open. The case was brought by green power provider Lichtblick, which points out that grid fees are now the biggest single part of retail power prices – and it’s hard to verify these fees independently. Grid operators are considered natural monopolies; as such, they propose prices to regulators, who need transparent data to confirm proposed fees. “Withholding relevant data is a violation of EU law,” he adds.

In other words, Germany could make the construction of new renewable energy projects more advanced by discouraging, if not ruling out, new builds in areas with a defined level of grid congestion – we have the data. Alternatively, policymakers could use grid congestion to incentivize local electricity-to-heat; the excess green power would then not be curtailed, but used as a heat source. Section 13, para 6a of the 2017 Energy Management Act (in German) is a starting point but doesn’t yet apply to wind and solar.

Whether the current debate over the transparency of grid data will help or hamper such advances is anyone’s guess at present.