More than Germany, the UK has reduced coal power and carbon emissions in recent years. Should we be talking more about the British model and less about the German one? More specifically, does Germany missing its 2020 carbon target put the country’s 2030 target completely out of reach? By Craig Morris.

The sun is setting on coal in the UK – what about Germany? (The joy of all things, edited, CC BY-SA 4.0)

Back in 2008, both Germany and the UK pledged an 80% reduction in carbon emissions by 2050 in the run-up to COP15 in Copenhagen. The British have performed better since then. An excellent overview of the UK’s power sector in 2017 by Carbon Brief shows that coal power dropped from 143 TWh in 2012 to a meager 23 TWh last year – a reduction of 84% – primarily due to the country’s floor price for carbon, which reached 23 pounds per ton last year. Germany only reduced coal power by 13% from 277 TWh to 242 TWh during the same timeframe. 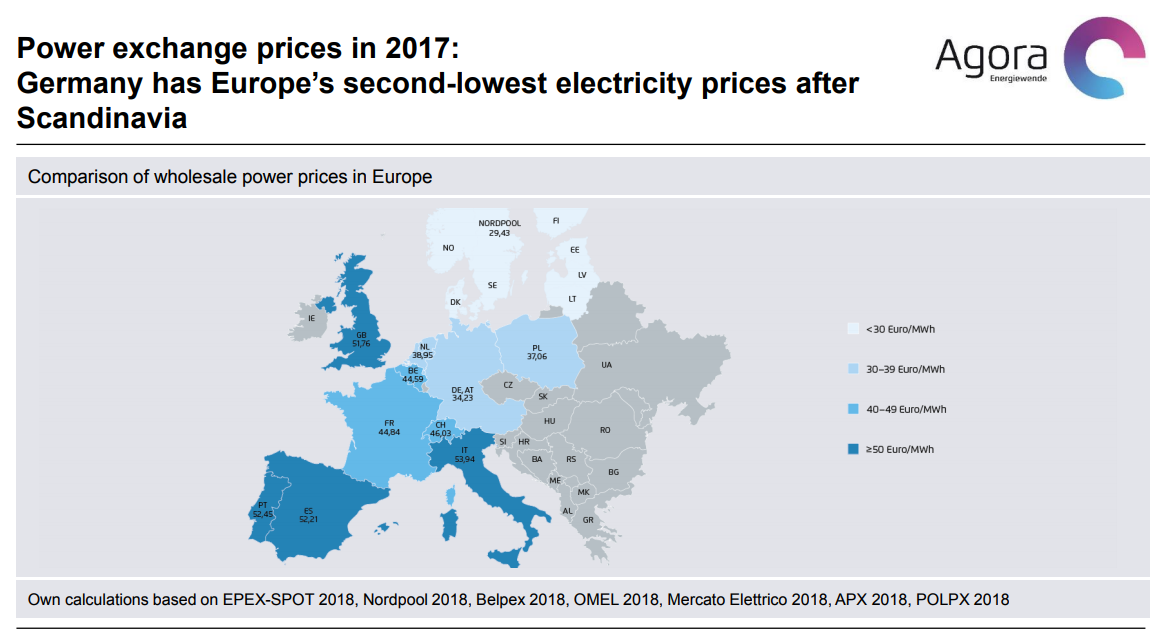 And while Germany continues to phase out coal gradually and without a roadmap, the British government announced this month that all remaining coal plants in the country would be closed by 2025. As of 2016, the UK had reduced its carbon emissions by 36% relative to 1990. Germany is likely to come in closer to a 30% reduction by 2020, far behind its 40% target. To reach 55% by 2030, the country would therefore need to lower emissions by 2.5 percentage points annually throughout the next decade.

But there are reasons to be skeptical of British progress – and more optimistic about Germany. For the UK, the story starts with this take from Carbon Brief: “The 84% coal reduction over the past five years accounts for around 80% of the fall in overall UK carbon emissions over the same period.” In other words, like Germany, the UK has made too little progress outside the power sector. Put differently, the British have already picked their low-hanging fruit, while Germany’s is still on the branch. Consider the following:

Looking ahead, British and German plans also differ considerably. While Germany has made up its mind to go with renewables, the British still consider nuclear – including new reactors – to be necessary and have not given up on carbon storage. 2018 is also expected to be a breakthrough year for fracking in the UK. Potential conflicts between these options, especially inflexible nuclear to complement fluctuating wind and solar, are not addressed in the British debate but will become unavoidable.

In addition, Scotland is not playing along with Westminster; the Scots have banned fracking and aim to meet 100% of gross power consumption with renewables by 2020. The British thus lack a common vision, so expect a political back-and-forth. Most importantly, what’s missing from all of these plans is a massive renovation scheme in the building sector along with, for mobility, the construction of charging stations for EVs and a focus on walkable cities.

Germany is also doing too little with buildings and mobility but should make considerable progress in the power sector by 2030. The nuclear phaseout will remove all nuclear reactors by the end of 2022, thereby drawing down the surplus capacity causing record exports. (In 2017, British wholesale power went for 5.2 cents compared to 3.4 cents in Germany.) Coal power will immediately plummet without exports, and the further growth of renewables will push it back even more.

Germany could reduce its power generation from brown coal (lignite) by 38% from 134 TWh to 83 TWh if electricity exports and imports would be balanced like in 2011.
50 TWh less electricity from brown coal would save 60 million tonnes of CO2. pic.twitter.com/QWxHYS4xND

The 2020s will therefore see the beginning of Germany’s coal phaseout with or without an official policy. That decade, German emissions are likely to drop faster than the UK’s – unless the British come up with a plan to pick the higher fruit of buildings and mobility. A 55% carbon reduction in Germany by 2030 will be hard to reach but not impossible – even with the nuclear phaseout.

Finally, let’s not forget that climate change is not the only issue, as important as it is. Prime Minister Thatcher devastated coal communities decades ago, and those in northern England just voted for Brexit. The UK is divided not only in the energy sector; the British still debate who they are. While it was bad for the climate, Germany’s commitment to coal regions in the past few decades was at least good for social cohesion, without which no energy transition is possible.